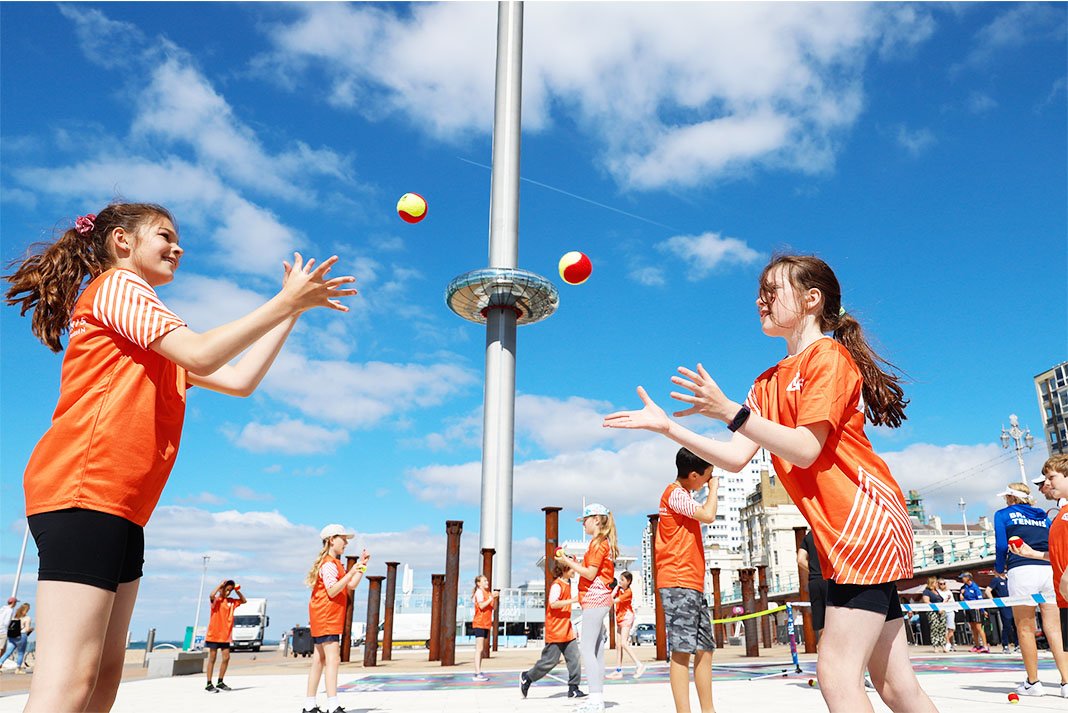 Former British star Julie Hobbs joined children from Brighton and Hove for a first-ever tennis session under the city’s iconic British Airways i360 on Monday. The session took place as part of the LTA’s drive to give more children the chance to try the sport as Wimbledon got underway and tennis fever continued to grip the south coast.

Hobbs, who played in the women’s singles at SW19 nine times between 1994 and 2003 and is now a tennis coach in the city, helped give children from Balfour and Hertford Primary Schools their first taste of the sport as part of Tennis for Kids, the LTA’s biggest grassroots participation programme. The event took place following another successful Nature Valley International tournament down the coast in Eastbourne last week.

Aimed at giving 4-11 year-olds an introduction to the sport, the programme launched in 2016 runs across six weekly sessions, which focus on fun, getting children active, and helping them make new friends. Courses take place in Brighton and Hove and across the region all year round and the LTA are hoping to sign up its 100,000th Tennis for Kids participant by the end of 2019.

Hobbs was joined on the specially laid court on the seafront by a team of local LTA coaches and representatives from Brighton and Hove City Council following the recent Take Part Festival which saw thousands of local residents and children try over 70 different physical activities at free taster sessions across the city. The Tennis for Kids programme is run in partnership with local authorities to help encourage children to be more active and lead healthier lifestyles.

Hobbs, who coaches at nearby Pavilion and Avenue Tennis Club commented, “I’ve played on Centre Court at Wimbledon and some of the most famous tennis venues in the world but nowhere quite as unique as this! To see these children get their first experience of tennis in such an incredible setting was great and hopefully, they will want to try it again. It’s a great way for kids to get an introduction to tennis and make friends at the same time.”

Head of LTA London and South East, John Golding added. “Tennis for Kids is a great way for children to get a first taste of tennis and where better for them to give it a try then here on the beach in Brighton on the first day of Wimbledon. Tennis is a sport that should be open and accessible to children from a range of backgrounds and by working with Brighton and Hove City Council, other local authorities in Sussex along with clubs and venues across the region were able to do this and give children the chance to play and get active, in a fun and positive way.”

Councillor Alan Robbins, Chair of Tourism at Brighton and Hove City Council, said, “Schemes like this are crucial in helping to get more of our city’s children leading healthy and active lives. It’s important that they get the chance to try out a range of sports and activities and we’re working closely with our schools, the LTA and clubs across the city to give them those opportunities. Tennis for Kids is a great way for children who took part in the city’s recent TakePart festival to participate in a regular, fun physical activity during the summer and the rest of the year.”

The Whiskey Affair coming to Brighton

Children who take part get their own kit with a special Tennis for Kids racket and ball set and a personalised t-shirt all for under £30.

To find out more about Tennis for Kids and sign-up to a local course visit https://clubspark.lta.org.uk/tennisforkids.