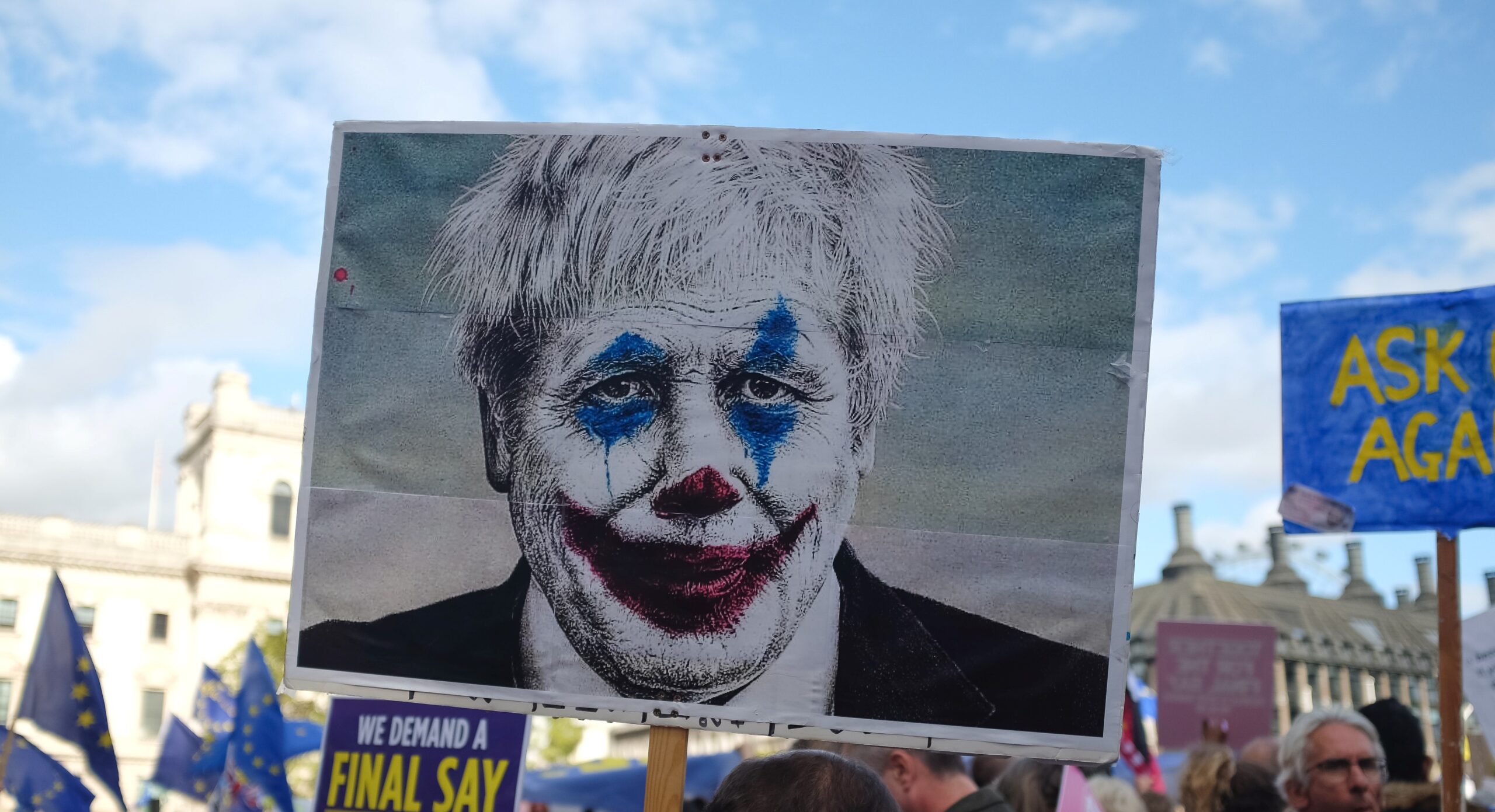 Much like Hitler did for the name Adolf, and Craig David did for both Craig and David, Boris Johnson is singlehandedly destroying the name Boris for future generations. With his murderous incompetence, misguided bumbling-idiot act, and his unfounded, blood-boiling arrogance, he’s rapidly conferring irrevocably negative associations onto the name. Soon, “Boris” will become so synonymous with atrocious governance and philandering misogyny, that it will end up taking those meanings on, and becoming a verb: Boris is totally Borissing the country right now; Boris really Borissed his marriage with all his Borissing around. It might even become a noun. That Boris is a real Boris.

However his name will be used, it will be used less as a name, as it now only remains an option for fellow snakes and envoys of Beelzebub who are cut from the same cloth and treat the country with the same disdain as the fat little scarecrow himself: the Jacob Rees-Moggs of the world, whose 19th Century-born children are probably called Lucifer, Mephistopheles and Voldemort (actually pretty cool names).

But I’m here to remind you that there have actually been some good Borises, and that this little fat wanker shouldn’t be allowed to ruin a perfectly fine collection of five innocent letters. Below are several famous or esteemed Borises, who have each found success in their chosen field, and done so without being an amoral, unethical, unprincipled, unscrupulous, evil Worzel Gummidge.

Boris Becker – Tennis player
Think Boris’s main claim is having sex with a waitress in a restaurant’s linen closet? Well, it probably is, yes. But he also says “freight train” really funny, and before that he was a tennis prodigy, bursting into the sporting world’s consciousness in 1985 when he became the first unseeded player (and the first German) to win Wimbledon at the tender age of 17 – and in quite possibly the smallest shorts ever to have been worn on the hallowed Centre Court.

He’d go on to become World Number One, win two more Wimbledon titles, as well as two Australian Opens and a US Open, among a total of 49 singles titles. Since then he’s become a favourite in the commentary box with his own inimitable turn of phrase, has somehow declared bankruptcy despite earning huge sums of money and reportedly owning properties in Germany, Switzerland, Monaco, Wimbledon and Miami, and has successfully grown a pair of long comedy elbows, which is probably something medically serious and I shouldn’t be ridiculing, but if so why doesn’t he get them sorted? In recent years he’s also acted as a coach to current World Number One (in both tennis and being a bellend), Novak Djokovic.

Boris Kodjoe – Actor, producer and fashion model
Handsome, talented, and seemingly a thoroughly nice guy, this Boris is as far removed from Johnson as possible, in that he’s handsome, talented and a nice guy. What’s more, the Austrian-American is fluent in several European languages, and is therefore probably better equipped to navigate the UK’s leaving Europe than Johnson, too. He’s better at being Boris Johnson than Boris Johnson.

Soon to be seen playing totally innocent, great guy, O.J. “Who Me?” Simpson in Nicole and O.J. (currently in post-production) focussing on the tumultuous relationship between the two and the subsequent murders of Nicole and Ron Goldman, he’s also featured in a whole range of high-profile series and movies including House of Cards and the Resident Evil film franchise among many others. If anyone can carry the torch of rejuvenating the name Boris, this man’s broad shoulders can surely manage such a burden.

Boris Yeltsin – Former Russian President
The face of pre-Putin’s Russia, he might have had an air of trouble-maker about him when he first came to power, but now, with the benefit of hindsight, looks like sweet old Uncle Boris compared to his successor, James Bond baddie, Vladimir “Probably Related to Dracula” Putin.

A Communist Party member for much of his political life, he came to believe in democracy and free market reforms and, resigning from the Communist Party in 1987, became a popularist anti-establishment figure. In 1991 he was elected President, and he was instrumental in the formal dissolution of the Soviet Union. Serving two presidential terms, his premiership was tainted towards the end with economic hardship and corruption. However, he is remembered by many as a great man. Clinton said, “history will be kind to him,” and our own Maggie Thatcher said he “deserves to be honoured as a patriot and liberator.” Whatever his legacy, I’d trust a cup of tea from his hand way more than I would from his successor’s.

Boris Pasternak – Nobel Prize winning author and poet
It’s difficult to find a picture of Boris Pasternak smiling. But then his life was a serious one, lived through difficult times of civil war, world war, and just lots and lots of war. In pictures of him, he wears the solemnity on his face, his intense eyes staring down the lens at you, one-part hypnotic, one-part seductive, several-parts change your underpants. I would not have fucked with Boris Pasternak.

Born in the Russian Empire in 1890, Pasto, as I’m sure no one called him, wrote what became a hugely important book of poems, My Sister, Life, published in Berlin in 1922. By far his most notable work in his extensive oeuvre, though, is the epic novel Dr Zhivago, taking place between the Russian Revolution of 1905 and WWII, published in 1957. The following year he was awarded the Nobel Prize for Literature, but was forced by his country’s Communist Party to decline it. His descendants were finally permitted to accept it in his name in 1988. And Pasternak got the last laugh (assuming he knew how to) as Dr Zhivago was made part of the Russian curriculum in 2003 and has remained so ever since.

Boris the Spider – Spider
Reputedly written by bass player, John Entwistle, in just six minutes after he’d been out on the sauce with Bill Wyman, this horror/blackly-comic song by The Who is a favourite among fans, and is regularly on the set list of their live shows.

The song is about the squashing of a spider with a book – or cold-blooded murder, as vegans call it. The second track on their 1966 album, A Quick One, the song is renowned for the use of basso profundo as Entwistle himself sings the chorus of “Boris the spider, Boris the spider”. Others have described the vocal technique as the genesis of the “death growl”, now used widely by death metal bands. According to one YouTube commentator this was “death metal vocals 18 years before death metal existed.” However it’s described, once heard it’s never forgotten, and it has long been my war-cry when approaching spiders with my own book in hand.

Boris Karloff – Horror actor
Last, but by no means least, is this legend of cinematic horror, William Henry Pratt: better known by the mighty stage name, Boris Karloff. Without necessarily knowing it, when you think of Frankenstein’s monster, you are almost certainly recalling images of Karloff, as he was synonymous with the role throughout the early years of cinema, and it is his look that has become the template for all future incarnations of Frankenstein’s poor old misunderstood monster.

He played several other iconic roles, such as Imhotep in The Mummy, in a career that boasts over 200 acting credits across 60 years. Not bad for someone that was planning on becoming a diplomat in the British Consular Service. Emigrating to Canada and drifting into acting, he travelled across the USA for ten years with a touring company, acting in low-budget theatre productions. Eventually, he arrived in Hollywood with little money to his name, just as the silent film industry was taking off. The rest is cinematic history.

Boris the Blade – Ex-KGB agent looking for a priceless diamond. Not real. Appeared in Snatch.

Boris McGiver – as well as having a brilliant surname, McGiver is a well-known character actor appearing in House of Cards, Boardwalk Empire, and Steve Martin’s comfortably below par remake of The Pink Panther.

Boris Vallejo – Peruvian painter. Specialising in fantasy and erotica, his paintings are… interesting. But if you’re looking for a picture of Conan the Barbarian aroused whilst battling monsters, Vallejo’s your man.

To all the Borises out there, apologies on behalf of the UK for ruining your wonderful name.