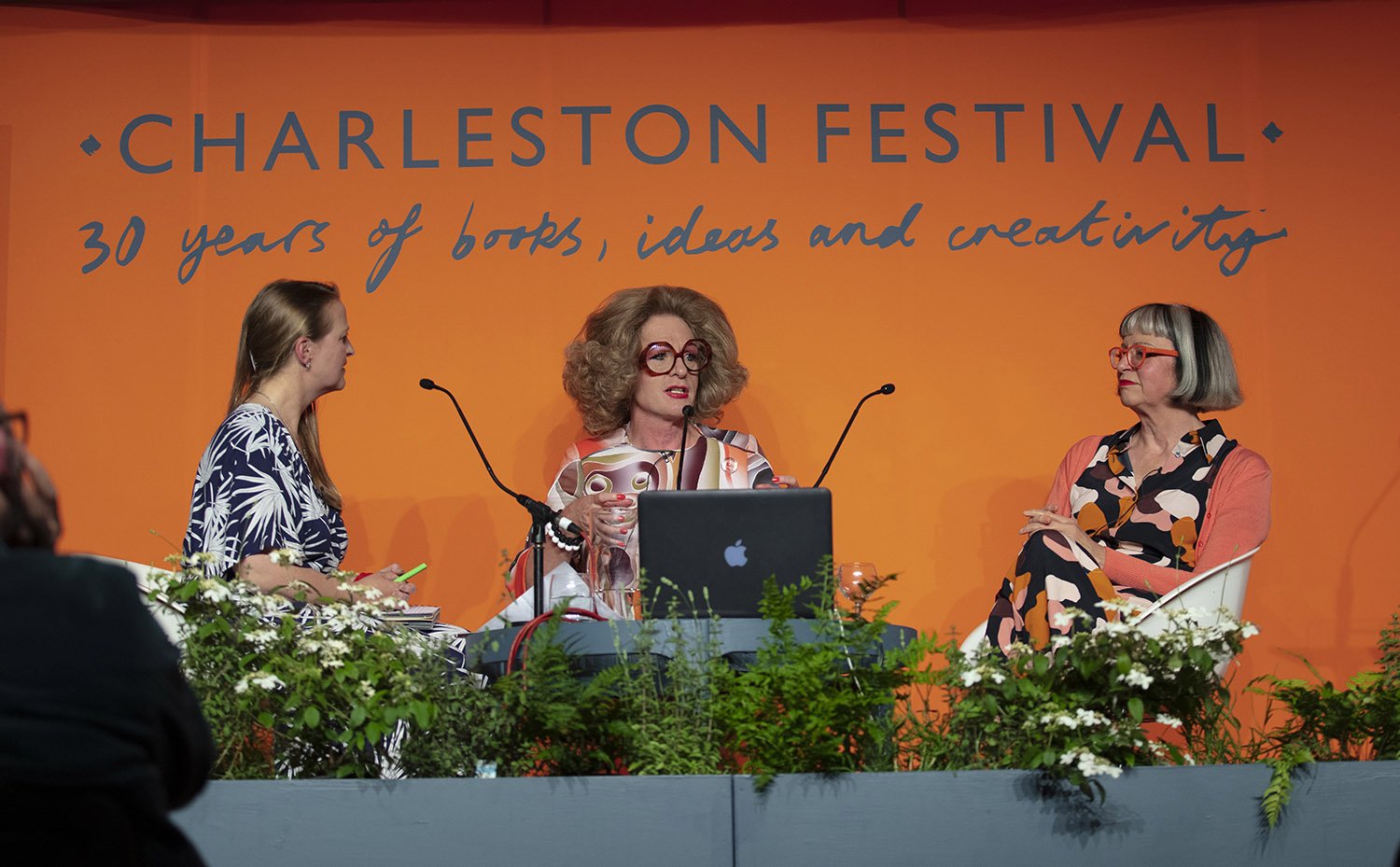 Set in the grounds of Charleston Farmhouse, former residence of the Bloomsbury Group, first-time visitors to the Charleston Festival, now in its thirtieth iteration, may well come away as struck by the historic property and its recently completed galleries as by their attended events. Those – such as myself – who have visited before but never attended the festival may come away struck by the effect which high footfall and a festival atmosphere can have. The usually-tranquil grounds in the bucolic Firle landscape hum with an energy that the literary community can often be said to lack.

The first event of my – but second event of the – day is a talk with Sir Peter Blake, the “Godfather of British Pop Art”. This hour-long conversation with esteemed critic Martin Gayford breezes through Blake’s career: giving an idea the longing for America displayed in his 1960 painting Got A Girl and his Self Portrait With Badges from the following year, the neglect of British Pop Art in comparison to its American counterpart, his involvement with The Brotherhood of Ruralists in the 70s, and his recent practical defence of the role that traditional artistic processes still have to play alongside modern methods.

Somewhat reluctantly, Blake’s talk concludes with a question from the audience on what he is most widely known for: the album cover for “Sgt. Effing Pepper”. Blake displays understandably mixed feelings on the matter given that his copyrights and royalties were signed away and he has since had to get approval in order to use his own image. However, Blake also acknowledges the pleasure derived from having created such an iconic image of Pop Art and popular music.

After whiling away the hour between events inside the well-stocked marque book shop, provided by City Books in Hove, it is back into the larger 400-seater marque auditorium for ‘The Skripal Files’. Here, former diplomat Charles Anson is interviewing Mark Urban on his book of the same name, which deals with the poisoning of Sergei Skripal, whom Urban interviewed shortly before.

Urban devotes his hour to an overview of Skripal’s life in the Russian military, selection for the Moscow Academy (“Spy School”), defection to West – which it seems was motivated by the financial and personal, rather than the moral or political – and life up until his near-fatal poisoning in March 2018.

Urban is engaging and articulate in a BBCish way but he remains understandably reticent on the juiciest details contained within his recently-released book, which the talk serves as a very good advert for. The only real effort to place the Skripal poisoning in the larger geopolitical context comes in the final fifteen minutes of Q&A with the audience, and is tantalisingly curtailed just as it seems to be getting going.

The final event of the day is a conversation between husband and wife duo, Philippa and Grayson Perry entitled ‘Art, Sex, and Creativity’. Together with chair Helen Bagnall, they prove a more than adequate replacement for Alan Bennett, giving an hour of entertaining anecdotes and insights. Grayson – as Claire – is as entertaining and seemingly candid as ever, and matched on stage only by Philippa, who recounts some interesting observations from her career as a psychotherapist. Together they discuss mental health, their own relationship, the stereotypical artist figure, and the way all three have interlinked throughout their careers.

As the final event wraps-up, the excited chatter resumes and many members of the audience take their place in the growing queue to meet Philippa and Grayson and have their recently-purchased books signed. It is undeniably refreshing to see people publicly engaging with literature and art, and to see both author and audience excited about the recent releases, demonstrating both Diana Reich’s excellent programming and the Charleston Festival’s ongoing literary significance.