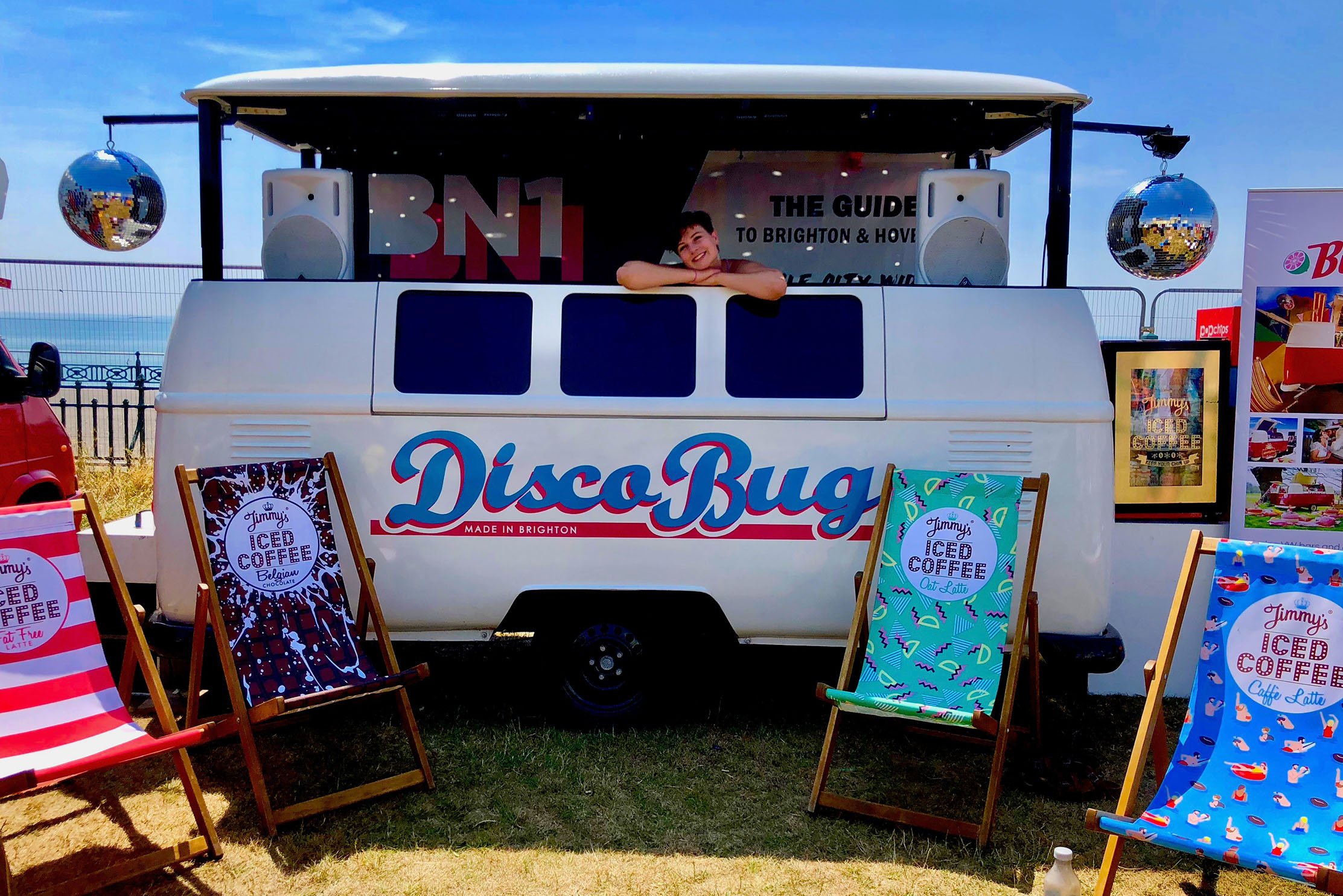 The Disco Bug and Bar in Brighton & Hove!

Justin Rushmore came up with the idea of serving cocktails, beats and beers from converted VW camper vans back in 2012. He now runs a fleet of four colourful vans “bringing the party” to mini festivals, weddings and events in and around Brighton. Having served mojitos to the likes of Little Mix, the staff of Amazon and even had FatBoy Slim perform from his DISCOBUG, kitted out with a state of the art sound system, mirror balls, lasers and hydraulic lifting roof! – it’s no surprise that his latest innovation is a Bugbar combo DJ booth and tap bar serving local Craft beers.

So what led Justin on this journey… He was heavily involved with the dance music revolution that exploded in the early 90’s and growing up in the home counties he did his graft as a mobile jock in the mid eighties. As the nineties approached so did a few detours around the M25 where the hazy days of acid house were all the rage! It wasn’t long until Justin was lured to the big lights of London where, with partner and artist Jem Panufnik, he set up one of the most successful independent record labels of an era – the award winning Finger Lickin’ Records which sold almost a million records and home to the Plump DJs, Krafty Kuts, A. Skillz, this was pre digital downloads – yes the vinyl era! As a producer under the guise of Soul of Man, with creative force Jem, they recorded and sold well over 100,000 12″s. Remixed

The Dub Pistols, Doug Lazy, James Taylor Quartet and many, many others…as a DJ he toured the world, far too many Bloody Mary’s 30,000 feet!

Around the same time he set up the award winning record shop Vinyl Addiction in Camden town, located in the basement of Bar Vinyl, a combined DJ bar café, which alongside the Dogstar in Brixton, was the first of its kind in the UK to have DJs in bars! A genius concept where you could buy tunes, drink beer and meet like minded folk…

As the proud owner of a ’73 bay window VW camper it was only a matter of time until Justin’s past experiences collided and a new concept was born – The Bugbar! Offering a range of services from DJ booth hire, silent disco parties, mini festivals, through to party packages for weddings, summer parties or product launches. Expect to see the Bugbar popping up in Brighton this summer.