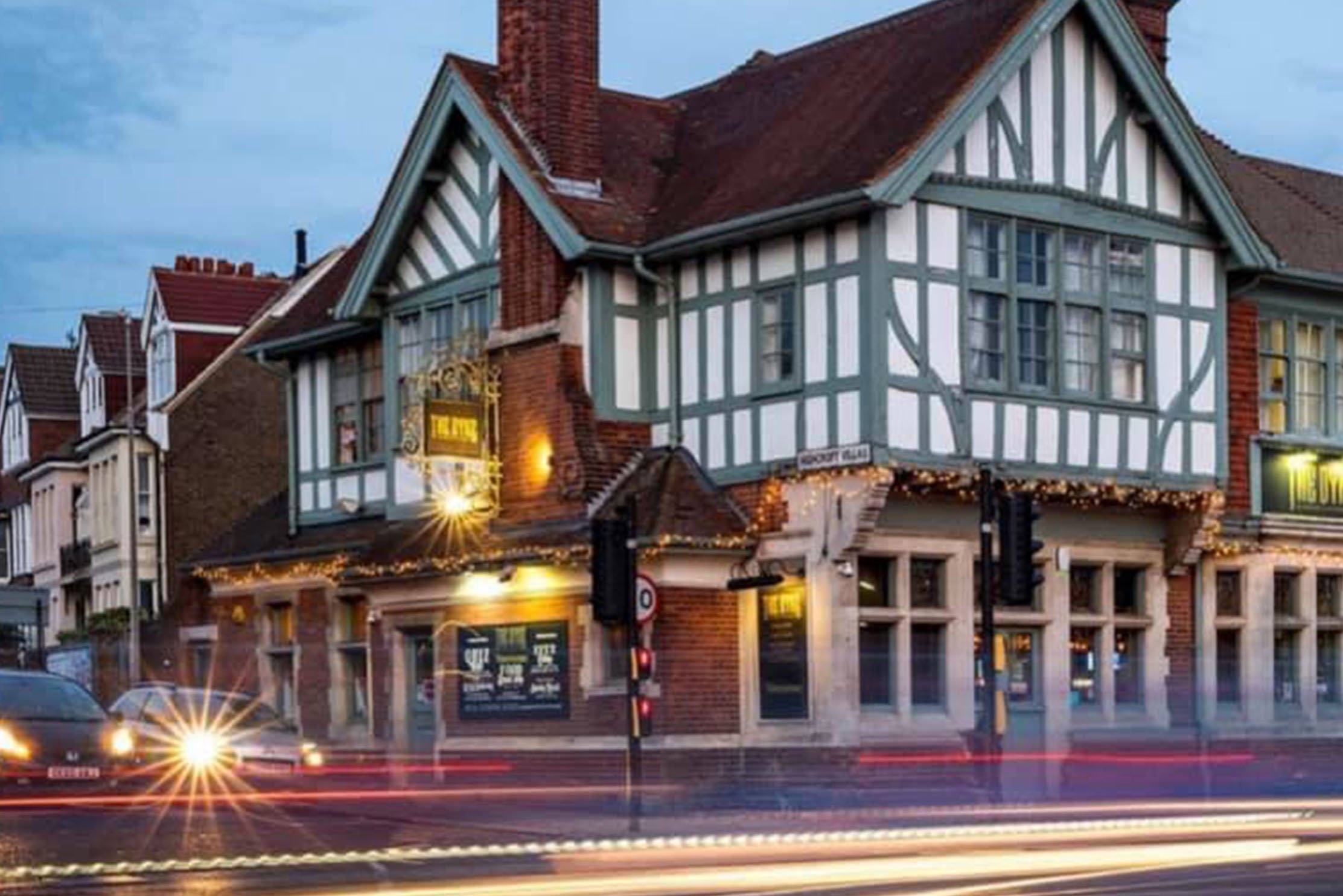 For over 150 years, a pub has stood at the corner of Dyke Road and Upper Drive. Now this Brighton landmark is looking at how the modern British pub serves the community around it. And at a time when many businesses are playing it safe, The Dyke Alehouse & Kitchen is challenging expectations of what pub food should be.

But, before you start the eye-rolling and tutting at the prospect of another unwelcoming, achingly-trendy ‘gastro-pub’ clogging up Brighton’s food scene, The Dyke is looking to make great dining an inclusive experience. At its heart, it’s still an honest public house. One which doesn’t expect you to head for a restaurant, should you fancy some high-end dishes.

“We’re concentrating on getting everything as fresh as possible,” explains The Dyke’s manager, Will. “We’ve switched from the ‘traditional’ menu to create a local pub with great food.” Reflecting the city’s seaside locale, and feedback from enthusiastic diners, seafood is very much front and centre on this menu – although there is plenty of more common-place fare upon the menu, like burgers, fish & chips, and steak.

But it’s Friday night, and we may be a little over-excited about being out and having someone else cook for us, so we’re going in hard on the fish offerings.

First up is their Mini Scottish Smoked Salmon & Cod Fishcakes with Tartare Sauce (£8.00). They’re a far cry from the hockey-puck sized discs at your local chippie.

The British traditional fishcake is made with cod, while a more decadent version has emerged using salmon with mayonnaise on the side. This is ironic now, as cod is far more expensive than salmon. But salmon also can suffer from being too heavy in a fishcake. So here we are presented with the perfect compromise. The two fish balance out each other perfectly, their playful creamy charms lovingly encased in a crispy coating. While on the side, rough-cut capers in the tartare sauce provide a tantalising zing amongst tangy notes. 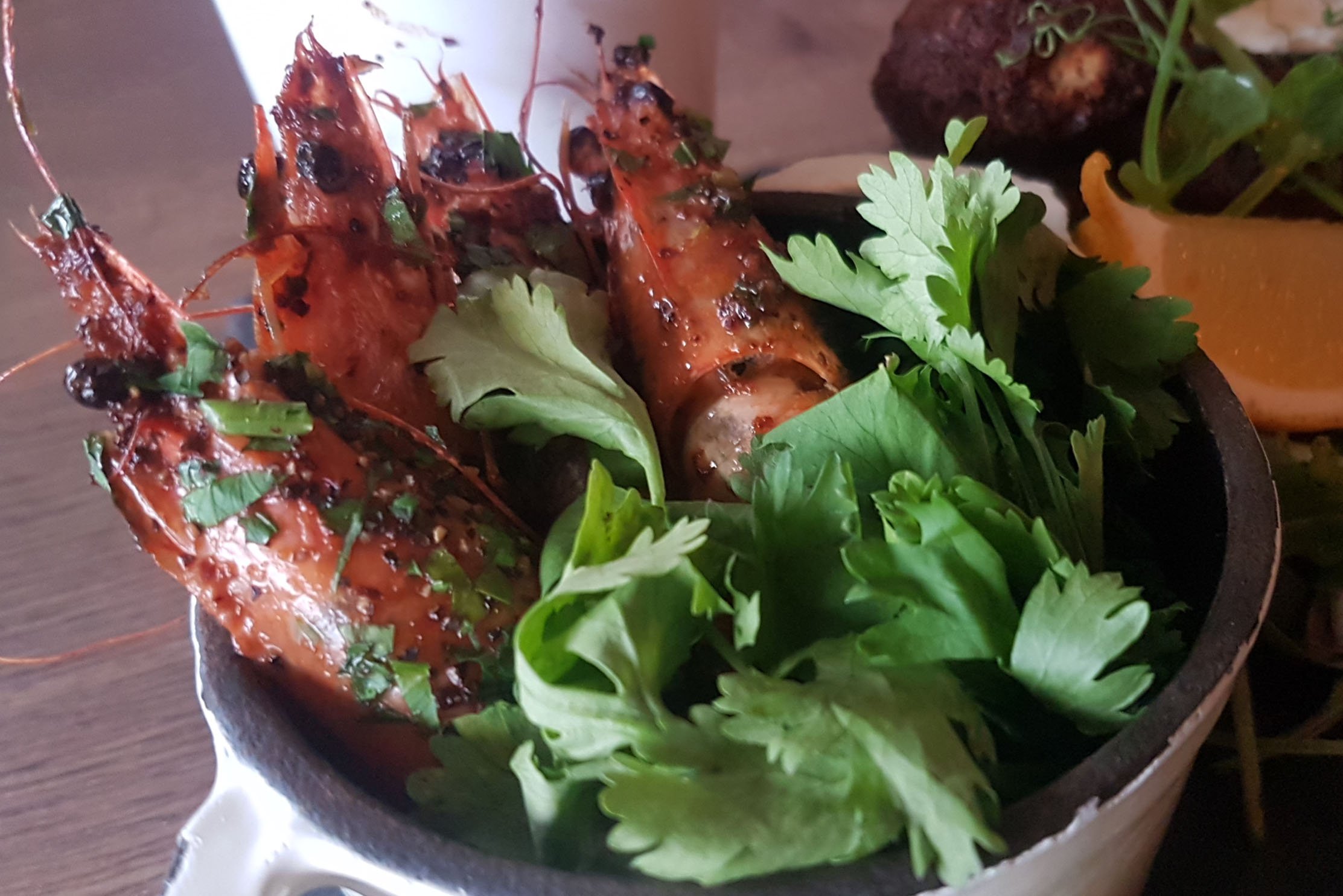 Everything coming out of the kitchen is superbly presented. Not least the Chilli & Garlic King Prawns (£8.00). Dressed with fresh coriander and served alongside thinly-sliced toasted ciabatta (you will be dipping this into the sauce…) it certainly pulls in nearby hungry eyes. The slightly salty meat is delicious, with a slight hint of sweetness. Alongside is a dark and earthy chilli sauce, which bursts with fruitiness and brings a complex, rich addition to the dish.

“I’m trying to bring restaurant quality food, but in a pub,” Andy the chef tells me. “And this is the right place for that.” Leaving school at 15 to train at Brighton’s City College, he went on to an apprenticeship at The Grand. After a spell at English’s, where he picked up a fascination with seafood, he went on to running an award-winning pop-up kitchen. Fast forward a little, and we find ourselves at The Dyke Alehouse. “We’re right by the sea, so why not do seafood? It wasn’t originally my intentions when I teamed up with Will, but it is what people like.” He says he’s intent on transforming the menu slowly, introducing elements like lobster and razor clams. And he locally sources his produce wherever he can to maintain freshness and quality.

Just to toss in a curve ball, we take a brief break from the seafood to sample Baby Falafels with Dressed Rocket & Tzatziki (£7.00). Boasting a crispy shell with a succulent, light interior, these were balanced and gently spicy – with the perfect hint of coriander. Presenting minimal resistance to the bite, these were further elevated by the creamy, bright-tasting tzatziki.

This quirky Victorian Tudor revival building was essentially saved from oblivion by Will. Crowdfunding over £20,000 in 2019, he’s been striving to return this pub into something which the community can be proud of. He seems to be listening to what everyone wants. Realising options for a decent cooked breakfast were limited in the neighbourhood, he’s started serving brunch on a Saturday. And then there’s the most-lauded roasts. Although it’s not been simple ride. “Since I’ve taken over, we’ve never been open for more than five months, because of Covid,” he tells me. “So, we’ve never had enough time to build a reputation and get going. I’m treating it as a completely new venture.” Maybe it’s not been the greatest time to open a pub. But, coming out of lockdown could be a great time for businesses to reinvent themselves and take on new challenges facing their industries. It does seem like The Dyke Alehouse & Kitchen is starting to become a ‘destination’, attracting people from across the city.

Prices across the menu are comparatively reasonable, with the bonus of not craftily concealing any unexpected extras for staples like cheese in your burger. A particular hatred of mine. The pub also provides a range of comfortable seating options, including stools at the bar – which seems to be a fading tradition in Brighton, but always lends a convivial atmosphere. There are also high ceilings, creating the dissonance of an airy space which is also cosy. Try not to think about that statement too hard. Whether it’s the neat Regency colours or some or black magic, it just seems to work beautifully.

While we’re at the bar, we should talk about the wine, which did provide a moment of small wonder. A crisp and refreshing La Serre Sauvignon Blanc (£19.00), it was packed with citrus, peach and crisp apple notes. And these gloriously soft flavours gave way to a delightful bright finish. Astonishingly, this turns out to be the ‘house white’. It’s long been my opinion that bottles granted this distinction should be the recommended choice, but too often they are cheap and unloved. So, this was a huge thumbs up from us both.

Also on the side we had Triple Cooked Hand Cut Chips with Truffle & Parmesan (£6.00). The most fluffy-centred triple-cooked chips, we’ve had in recent history. A perfect match of cooking time and potato choice, these offered up the three textures you’d hope for. Drenched with truffle oil and parmesan, it’s a sumptuous remaster of a modern-day classic. 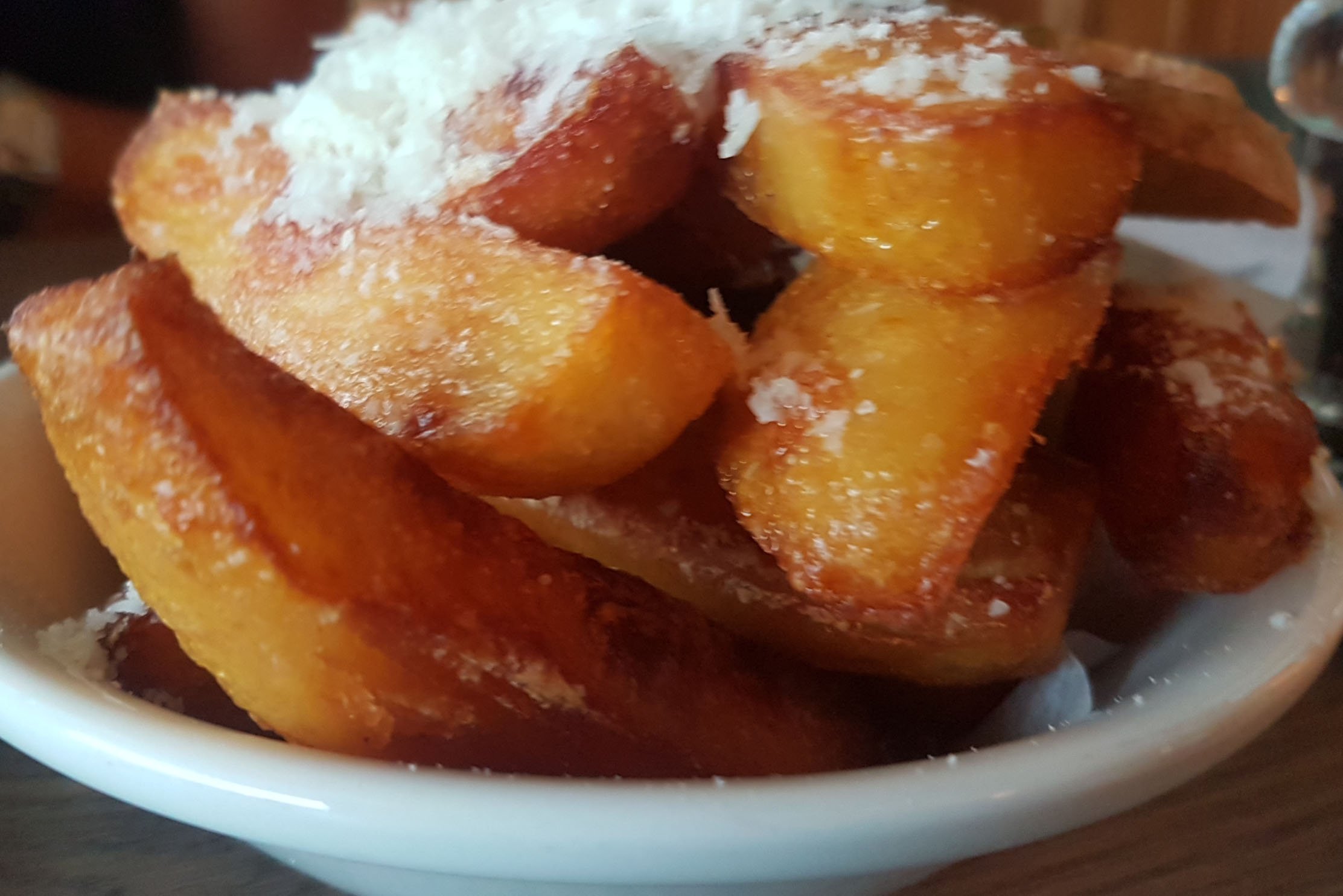 Switching back to the fish, before we got too distracted, we check out the Lobster Thermador Mac & Cheese Balls with Brandy & Mustard Sauce (£9.00). Another upgrading of a familiar plate, this mixed in beautiful melt-in-your-mouth consistency with the Thermador which lends a delectable, sophisticated edge. We could not get enough of the brandy and mustard sauce, as it was beguiling, creamy and rich, and added a tangy and luxurious depth to the plate.

Devon Crab Risotto with Crab Claws, Dressed Rocket, Parmesan Crisps and Garlic Bread. (£16.00). I’ve neither the time nor the energy to cobble together a risotto. Even the practice of slowly getting drunk while I stir is not enough to encourage me. But I will generally gravitate towards this on any menu. And this version was the evening’s showstopper. Moist and soft, with fresh, succulent crab meat adding tender sour and salty notes throughout; we could have happily eaten this creamy delight for the rest of the weekend. Although that may not have been good for anyone involved. The accompanying parmesan crisps were delicate and nutty, standing as the perfect counterpoint to the delicious rice. It’s also refreshing to be served garlic bread dripping with actual garlic and this  example provided a handsome crunchy compliment to the risotto. 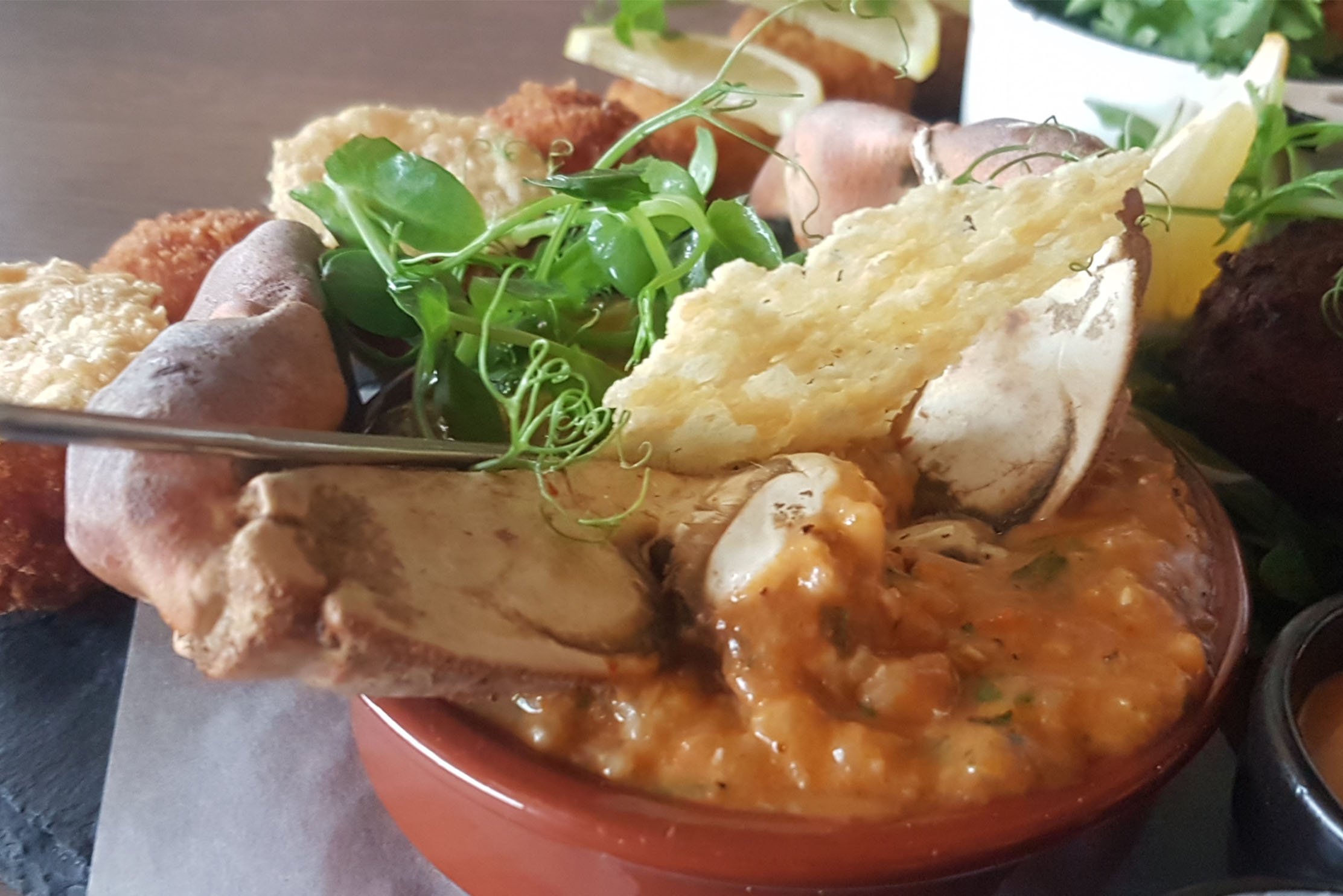 Andy is firm about his ambition to produce the best pub food in Brighton, and in turn redefine what you should expect from your humble local. “It’s relaxed. You can get all sorts of people in here. It’s not the poshest thing in the world, but if you do like lobster or scallops it’s there. But there is something for everyone.” It’s been some testing times for the whole hospitality sector. There are new challenges, and the businesses most likely to flourish are those which closely examine how they respond to customers. Likewise, customers are reassessing what they want from their local. For us two, a big factor has become food offerings – and The Dyke Alehouse and Kitchen is making itself difficult to ignore.

The Dyke Alehouse and Kitchen is at 218 Dyke Rd, Brighton BN1 5AA