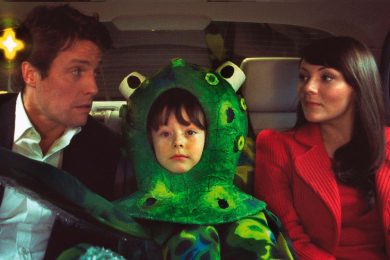 The greatest Christmas films ever

Season’s greetings! 2020 has been a tough old time, but with winter’s shorter days comes the most magical part of the year. Yes, it’s Christmas. A time of gift giving and heroic over-consumption, where children’s faces light up at the small wonder of disguising indoor arboreal decay with tinsel and flashing lights. There’s nothing which puts us all in touch with the true meaning of Christmas than Hollywood. The festive period has offered inspiration to some of cinema’s greatest moments. So, to get you in that feel-good mood, we wrapped up a delightful selection of the best Christmas films.

Actually, people almost being killed by cars can be quite funny. Will Ferrell unloads a super-sized sack of holiday cheer, as a human child curiously raised by elves. 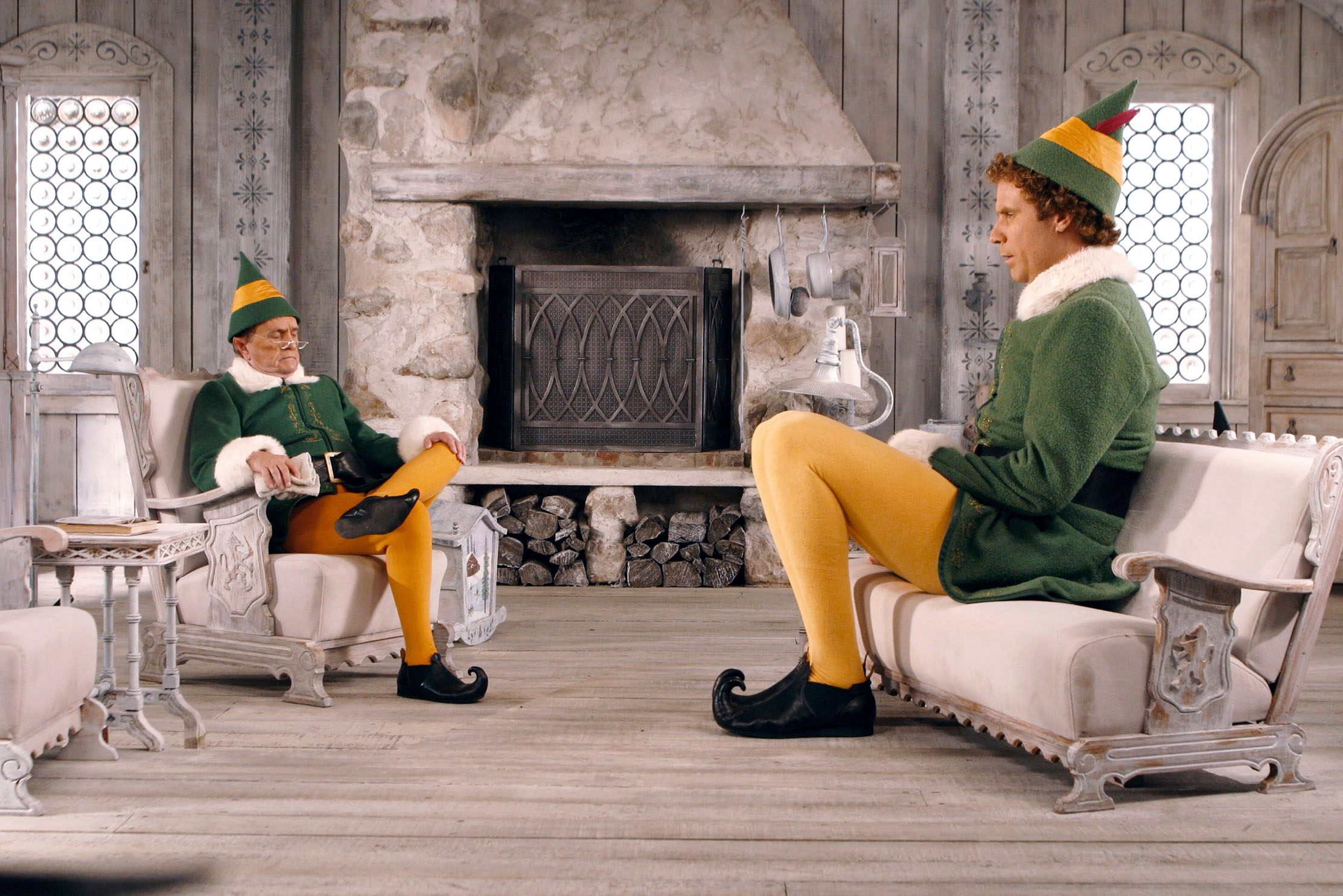 Now he’s an adult this six-foot streak of idiocy can’t cope with the cramped conditions Santa’s little helpers work in. It’s off to New York City, to find his biological father. The world he finds is harsh and cynical, everyone has lost the blessing of belief. So, can Buddy the titular elf bring joy back to the world? Despite being mind-bogglingly stupid at some points, this has heart, direction and a few things to say. Pretty much everything is over-shadowed by Peter Dinklage, as he reveals a few truths about little people’s experiences. This family-friendly film teaches us you can get away with anything if people perceive you as being full of innocent wonder.

Richard Curtis’ multi-stranded schmaltz-fest could be a jumble of mismatched story arcs in the hands of a different director, but despite its flailing complexity it succeeds in being one of the greatest and most uplifting Christmas films ever made. 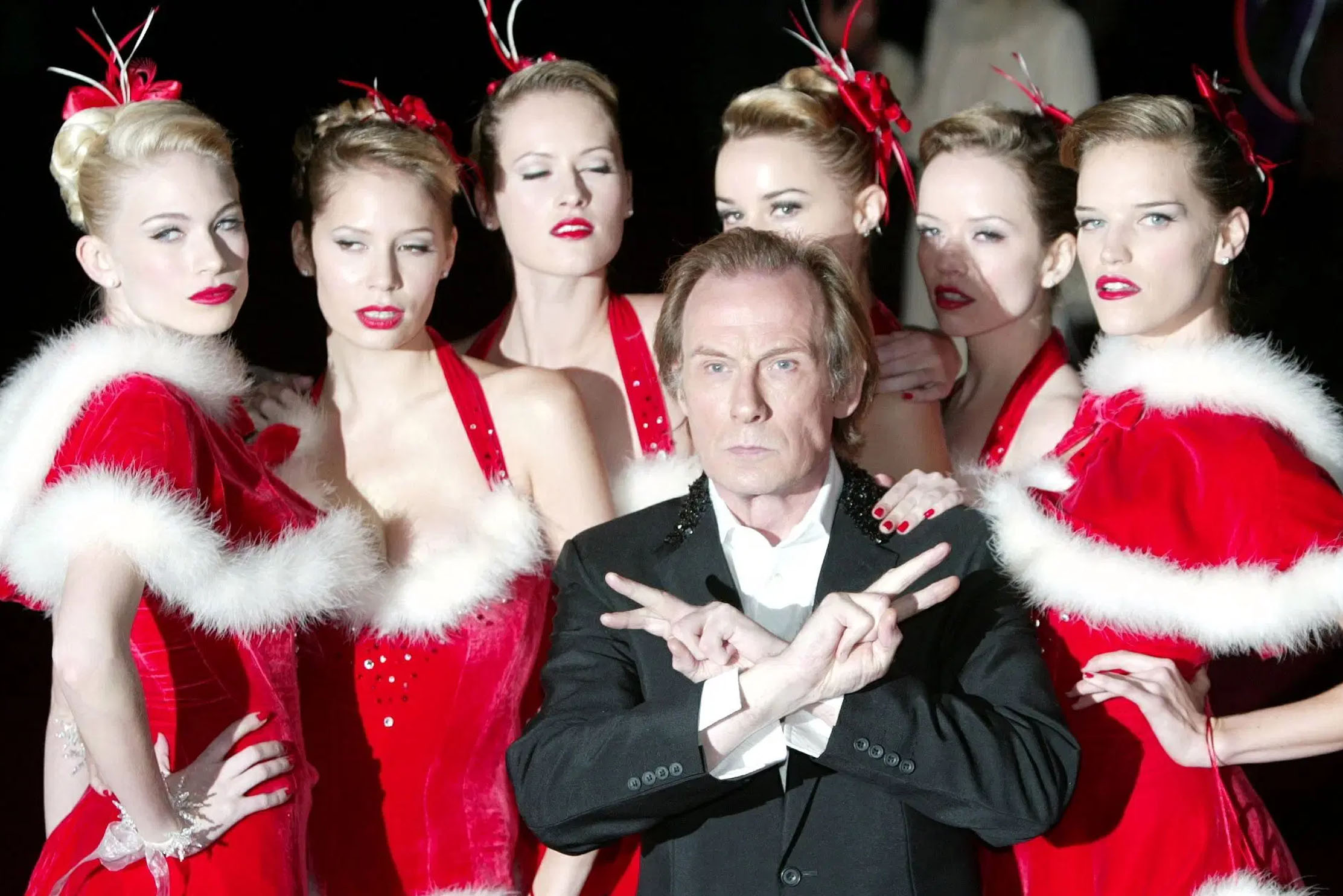 What could be better than mixing Bad Day at Black Rock with The Towering Inferno, and then presented as a postmodern reinterpretation of traditional Teutonic Christmas tales? 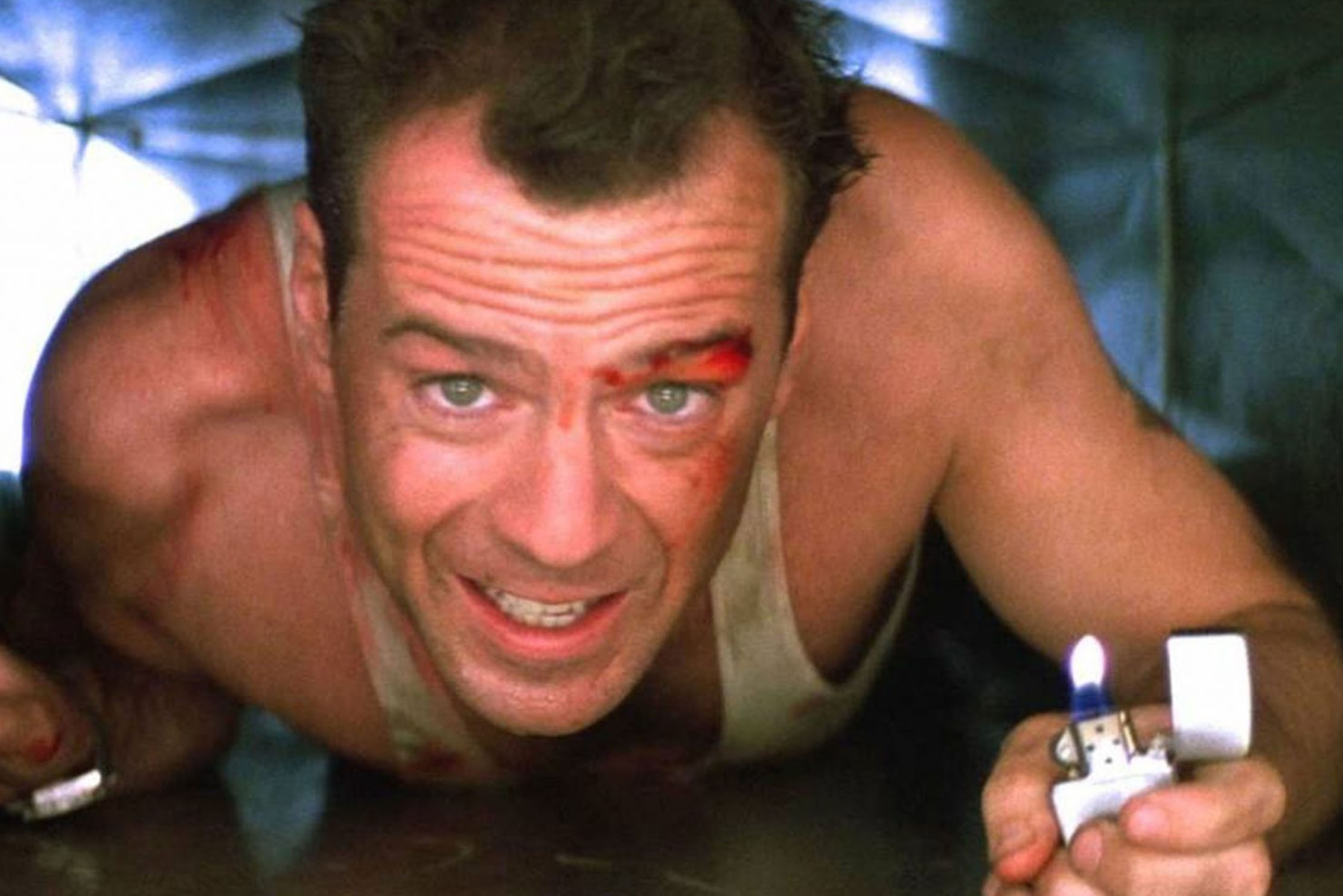 Here comes a group of charismatic ‘terrorists’, hell-bent on destroying everyone’s festive spirit. Standing in their way, minus his shoes and shirt, is a grumpy Bruce Willis. Helicopters become a metaphor for Santa’s sleigh, a lift shaft doubles as a chimney and the looming skyscraper is literally lit up like a Christmas tree. Willis even manages to make it snow in Los Angeles at the film’s climax. Antagonist Hans Gruber (played to perfection by the late, but eternally effervescent, Alan Rickman) sets a 30-year standard for Euro-villains… BUT, he’s not factored in the determination of a bruised and world-weary Willis. There’s a street-smart chauffeur listening to Stevie Wonder’s Skeletons on repeat in the basement, the greatest one-liners of the 80s and a Rolex watch offering a prescient symbol of corporate greed and self-interest. This is the greatest action film ever made and perhaps one of the greatest Christmas films as well.

Billy Wilder’s 1960 classic might not seem like a natural choice for Christmas Day, being packed with deceit, infidelity, power games and depression, but it does offer a hilarious and brilliant reminder that not everyone is having a great time during the revelries and office parties. 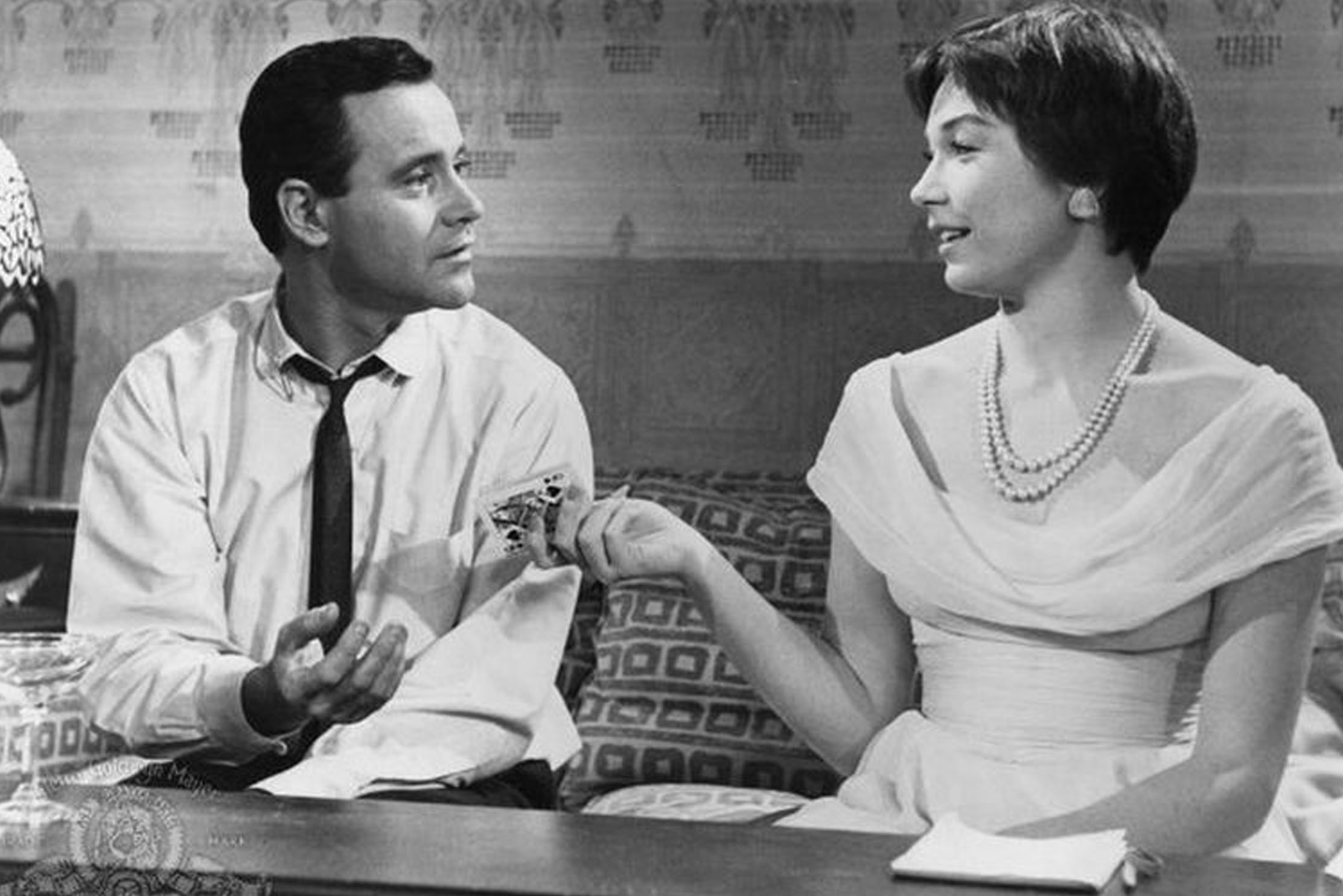 Inadvertently, Jack Lemmon has started letting co-workers use his tiny New York flat for their illicit liaisons. It’s a seemingly harmless arrangement which propels him up the career ladder, until he starts developing feelings for his boss’s mistress – played by an ever-captivating Shirley MacClaine. This Best Picture Oscar-winning tale of the thin line between loneliness and love is one of cinema’s all-time greats.  Many of us have been confronted with a environment we don’t understand, where we’ve been made to feel alone. The Apartment reminds us that it only takes one person to break through the walls we build to survive.

Dark humoured, sharp and packed with mayhem, Gremlins features a town of dangerously stupid people, plagued by a species of violent and sociopathic creatures. 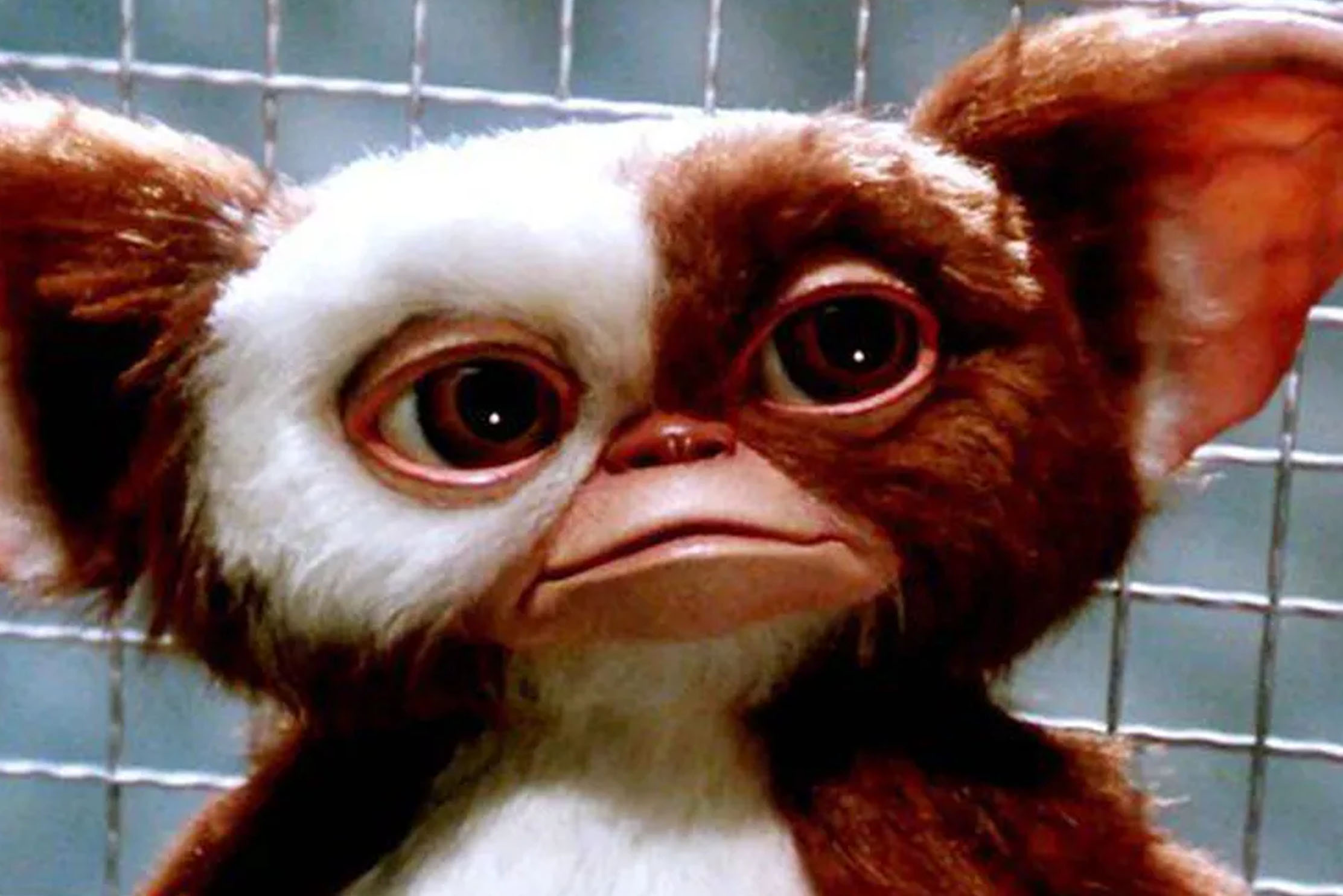 It begins when an achingly sweet animal is bought as a last-minute Christmas present. But with it come rules and responsibilities. Obviously, these get broken fairly quickly, because kids never ever listen, especially in films. Sooner than you can say “oops-a-daisy”, a horde of foul creatures are running amok, torturing and even murdering inept locals. The besieged snow-covered town offers plenty of potential for satirical swipes at established festive themes. The darkest piece of comedy drops when the female lead relates the story of her father’s bizarre demise, which exposes the one lie every parent tells their child. Get ready for drunken cops, death by microwave and some rampant xenophobia, because it’s Christmas!

Home Alone perfectly reflects the anxiety of being abandoned to face an onslaught of odd shadows and unrecognised noises. 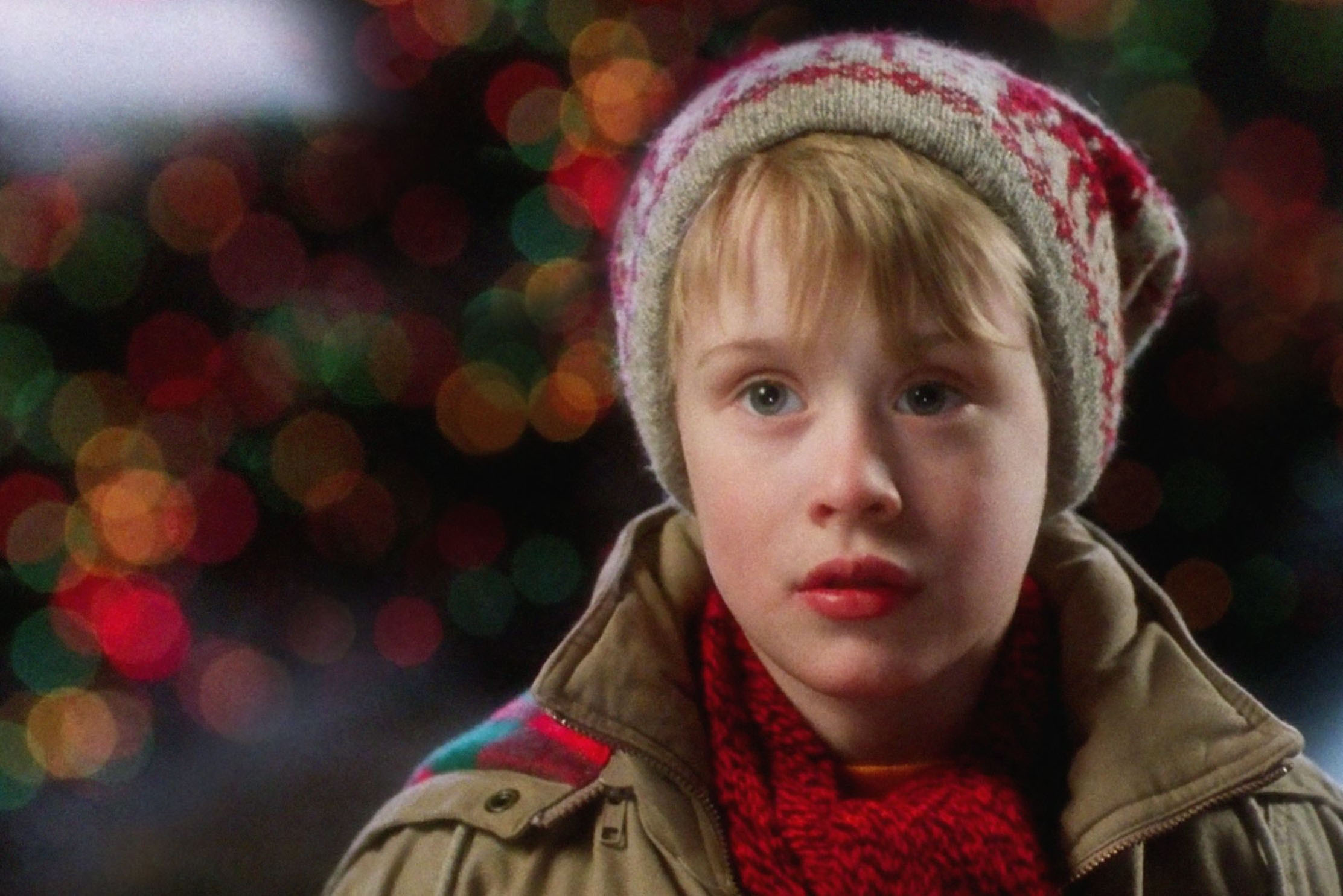 Get yourself in the festive mood with a film full of child neglect and home invasion. Despite the merciful absence of social services, of course Macaulay Culkin’s character Kevin gets up what any self-respecting eight year old would, when left to his own devices, so no inept burglars are going to spoil the fun. There are great supporting turns from Joe Pesci and Daniel Stern as the clumsy intruders, as well as plenty of genius ad-libbed moments. Home Alone has stood the test of time well, remaining way ahead of most of its 80s contemporaries in the comedy stakes. Adroitly mixing cartoon violence, humour and plenty of feel-good Christmas cheer, it’s a face-ironing, junk-food gorging, hair blowtorching, foot-nailing fun fest for all ages.

Taking time off from playing a range of proper naughty cockneys, Michael “You’re only supposed to blow the blahdy doors off!” Caine teams up with the world’s most unruly crew of anthropomorphised soft toys. 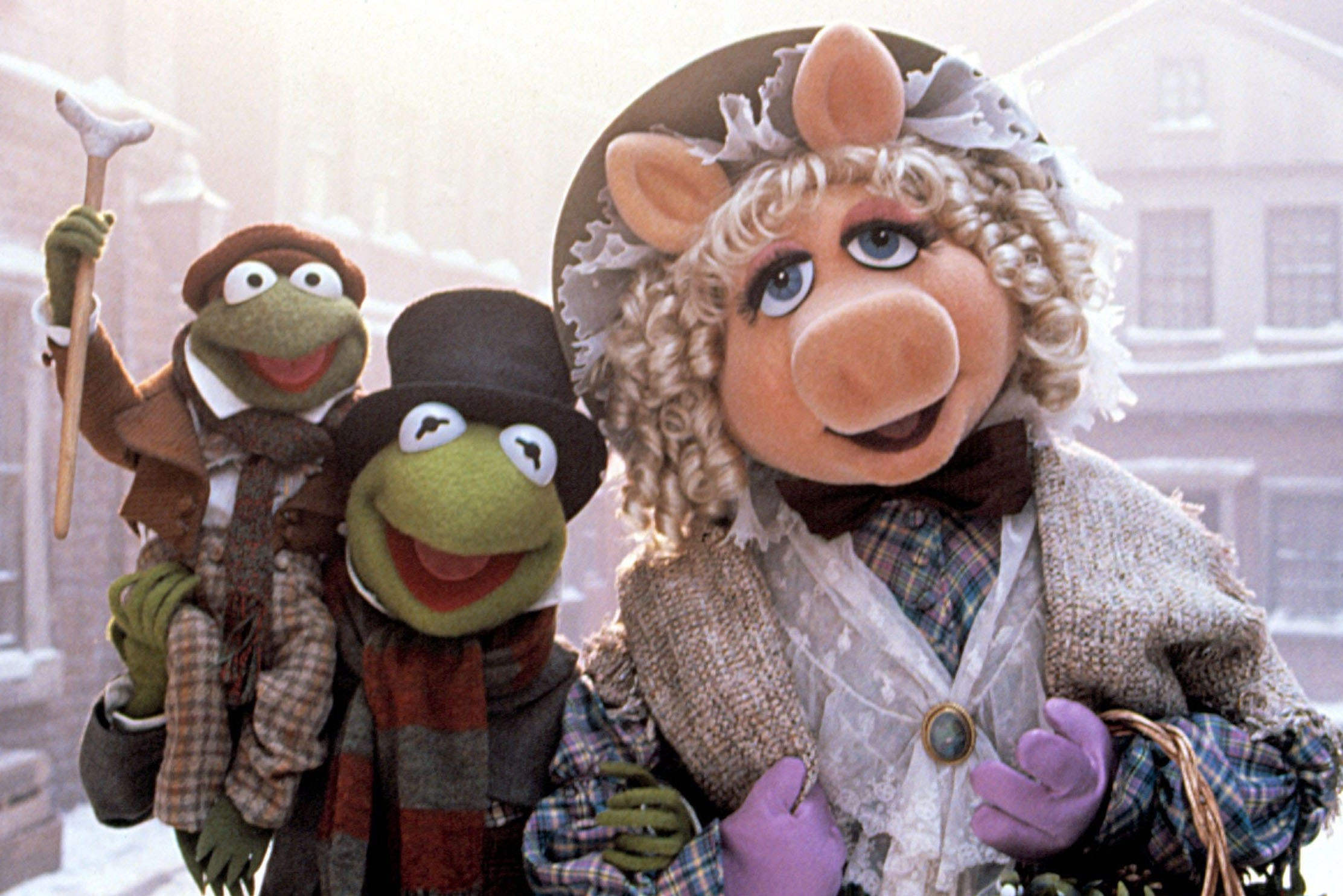 At times, it’s the most sombre Muppet film – the death of franchise creator Jim Henson was perhaps still affecting his colleagues during this production. Dickens’ original is recreated as faithfully as you can with a cast of singing puppets, whilst Caine saw something of a resurgence after his role as the embittered Scrooge, giving one of the best performances of his career amidst the absurdity. The songs are infectious, the Victorian London sets are perfect and every moment is packed with movement. Redemption will never get more entertaining than this.

Another honourable mention for Dickens’ classic, this time seeing Bill Murray recreate the mercurial miser as an 80s television executive. 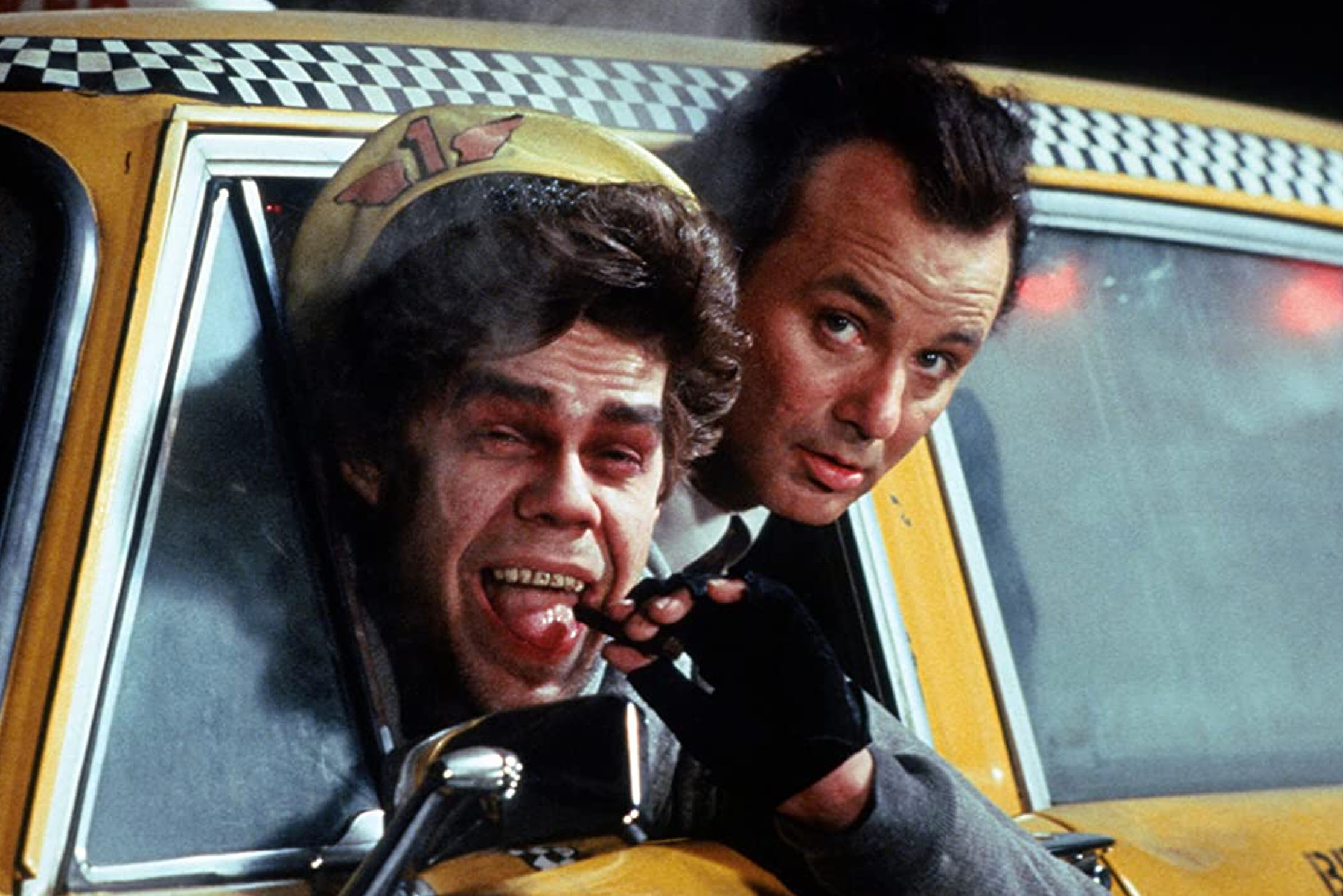 It was the start of the actor’s urbane, slightly bemused, new direction. He plays Frank Cross, a boss obsessed by TV ratings, who is for all intents and purposes a bit of a dick. He’s only truly happy when making life miserable for everyone around him. Eventually three very scary spirits turn up, attempting to reason with the misanthrope. Panned almost universally by the critics when it was released, this film is now viewed in a more benevolent light. The contents of the TV station’s Christmas schedule are undoubtedly the big winners here, acting as a raucously cynical vision of the future we now live in.

Seizing Academy Awards for screenplay, original story and Edmund Gwenn’s starring performance, this heart-warming fantasy asks just how much we want to believe in Father Christmas. 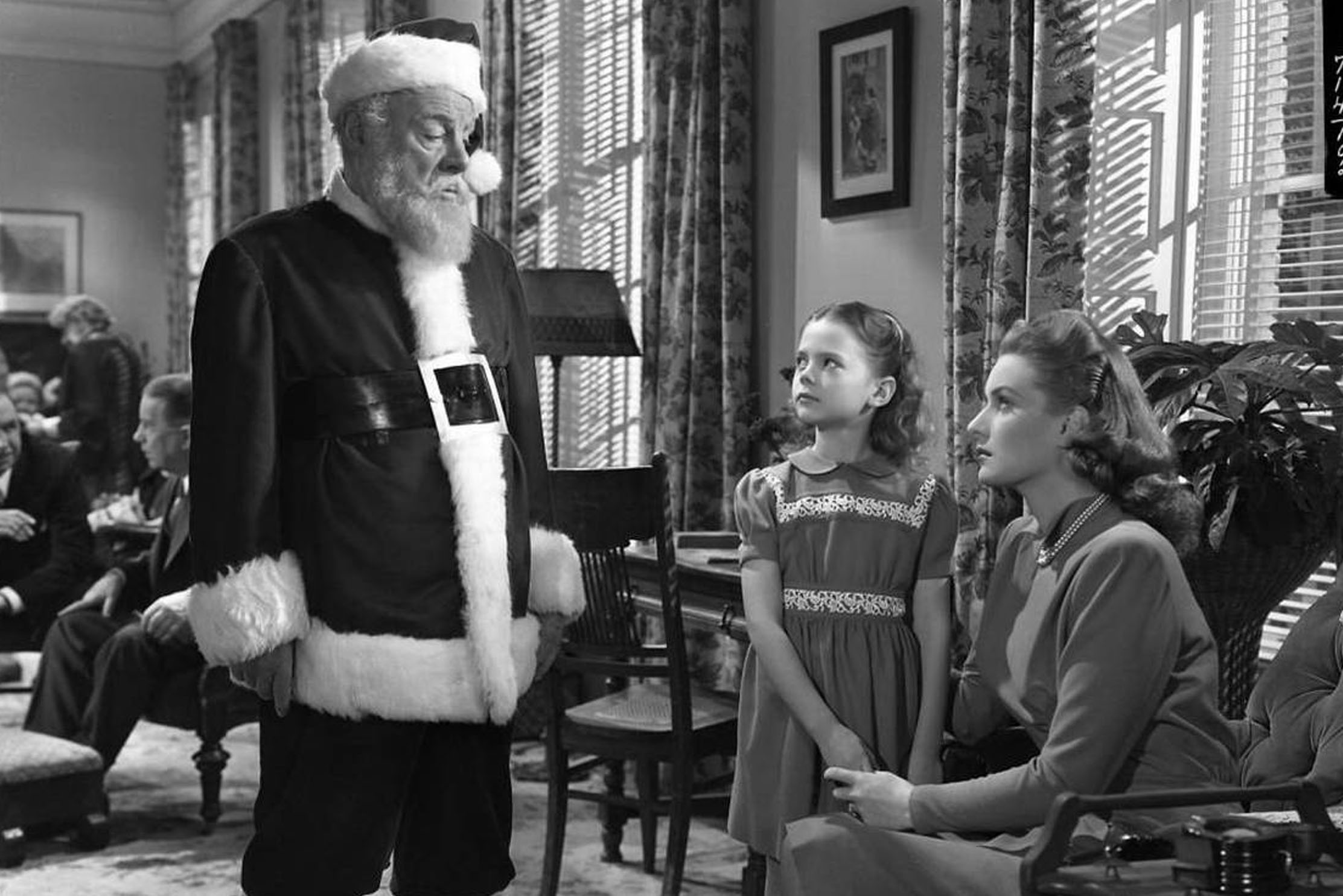 An old man gets a job as the Macy’s department store’s Santa. There he bonds with the sceptical boss’s daughter. She doesn’t believe in these silly Christmas myths, but there’s new evidence to challenge her conditions. Is the old boy taking his work a little too seriously, or is he the real thing? Amazingly released during the summer, this low-budget side project has gone and earned a core place in Christmas culture. If you can handle it, avoid the hideous colourised version. The slightly odd scheme used only detracts from the gorgeous tones of the black and white original. Odd for a movie concerned with a message against commercialism to be altered for ‘wider appeal’

“One man’s life touches so many others, when he’s not there it leaves an awfully big hole.” George Bailey is at the end of his tether, and about to throw away god’s greatest gift. Then his suicide attempt is halted by the intervention of… a trainee angel. 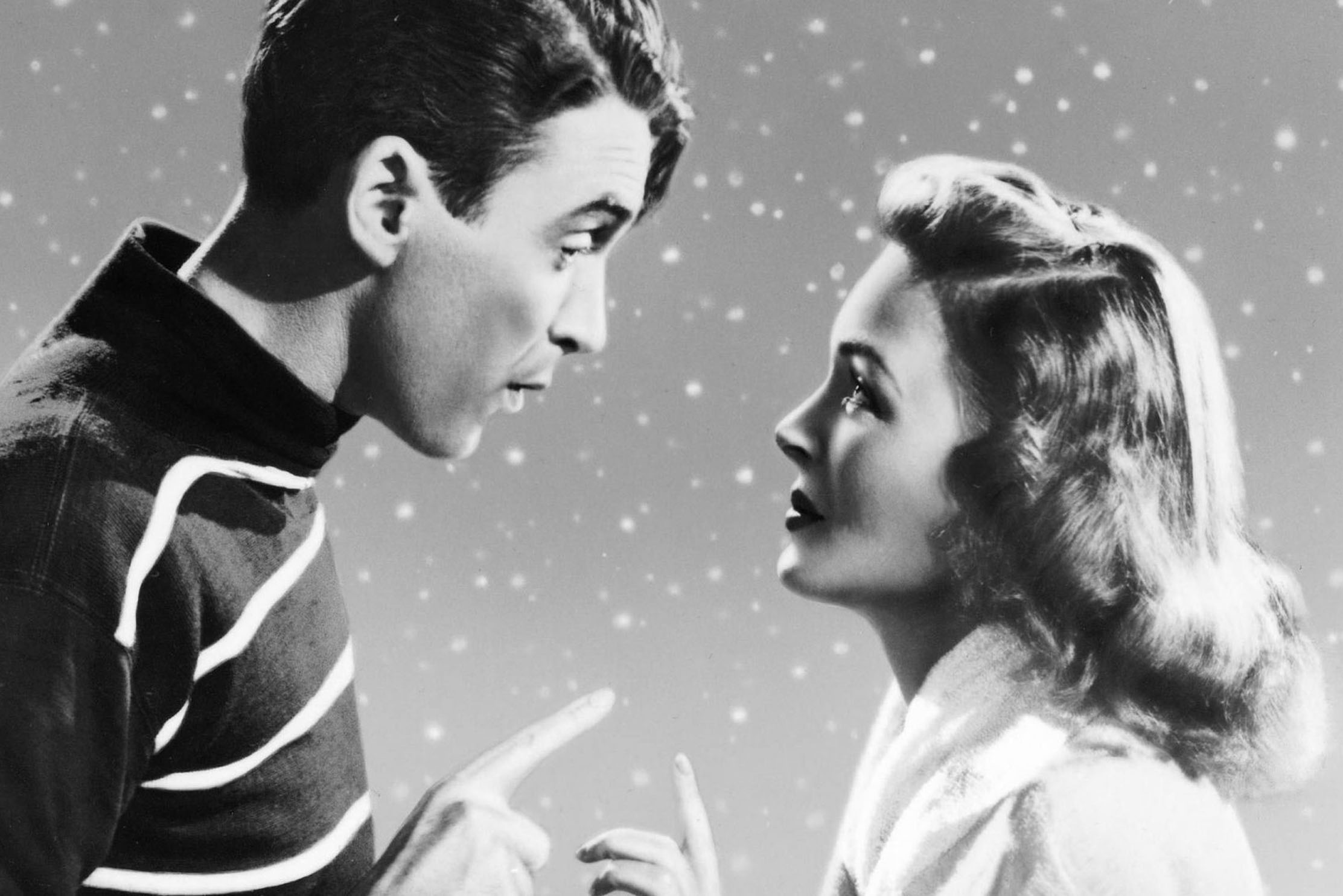 Obviously, the father of creation himself is off being mysterious elsewhere, or won’t spare the manpower for an agnostic. Never fully realising his potential, Bailey has become the guardian of his neighbour’s finances. He’s happy with his life until a scheming rival acquires the upper hand. A selfless man who works non-stop, Bailey almost makes himself destitute for the benefit of the community. Ostensibly we’re shown anything of true worth can’t be bought with money – only friendship, love and altruism can truly soothe the soul. Self-sacrifice, crushing disappointment and the fragility of happiness deliver one man’s darkest night. In the face of misfortune Bailey, his dreams and vicariously ours, remain undeterred.