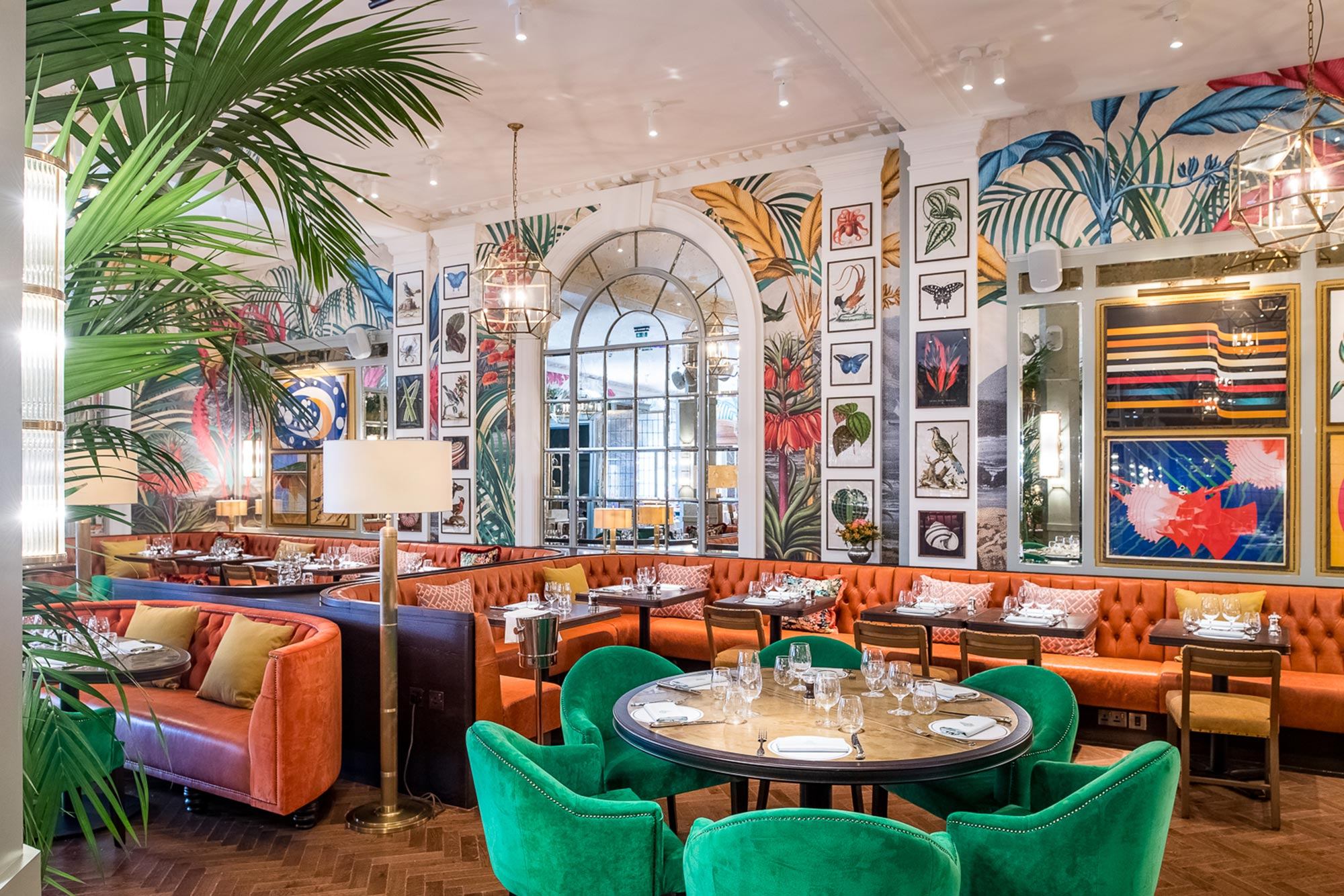 It’s not often I dine out at a fancy restaurant, so I was all but licking my lips when I donned my best shirt-that-doesn’t-need-ironing, and tucked it into the smartest trousers I could still fit into post-lockdown. And as I waddled down to The Ivy in the Lanes, my other half, G, clutching my arm, I thought to myself, this may be the closest I come to being a bigshot – make sure you act as pompous as possible and treat everyone with disdain, just to see how the other half live.

Sadly, my attempted haughtiness was immediately punctured upon arrival when we were given a warm a welcome and shown to our table in the glamorous and atmospheric surrounds: I couldn’t possibly be rude to such convivial people. The table was adorned with the usual fine dining accoutrements, with the subtle addition of something to remind us of the times we’re living in: a discrete bottle of (nicely perfumed) hand sanitiser. With the opulent décor, art deco lighting, and immaculately attired staff, it felt like we were at a party at Jay Gatsby’s house – with social distancing.

We were looked after throughout the meal by Dimitris and the Assistant Manager, Erika, a team as charming as they were staggeringly efficient, never letting our wine glasses approach empty, and swooping from their unseen vantage points whenever it looked like we had a question or were ready to order.

And ordering was the only dilemma of the evening, as there was nothing on the menu that I didn’t want to devour from their wide range of starters and mains, including five mouth-watering types of steak. Galvanised by a glass of prosecco each and furnished with a pre-starter of truffle arancini to fight over, we began the serious work of selecting from the delectable. 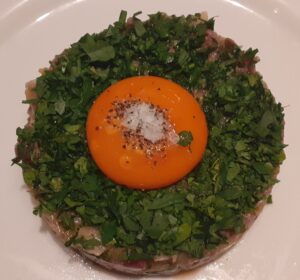 Feeling brave, I took the opportunity to try something I’d long wanted to, and ordered the steak tartare for my starter, whilst G went for the seared Atlantic scallops. I should say at this stage, that, despite my insisting that I should taste everything she ordered in substantial quantity to accurately review it, G had other ideas, allowing me the merest morsel of each course. And, based on each morsel I managed to crowbar from her plate, I can’t blame her: the scallops, like each of her subsequent dishes, were absolutely delicious, the samphire tempura a sublime accompaniment.

I’ve occasionally eaten raw mince whilst cooking a bolognaise, which I’ve always found quite moreish, but I’ve never had steak tartare, and wasn’t sure if a whole portion of raw beef striploin would be too much for me. I needn’t have worried. Served with cornichons, shallots, parsley and an egg yolk, as well as toasted granary on the side, I could genuinely have eaten three or four on the trot: it was absolutely to die for. And I feel at least 4% fancier for having had one.

After finally narrowing down from the hugely appetizing array of mains, then briefly dabbling with a curve ball of aromatic duck curry which was one of the specials Dimitris alerted us to, I decided on the Keralan monkfish and prawn curry, served with jasmine rice, coconut and sweet potato crisps. I rarely order a curry outside of a Thai or Indian restaurant, for fear of disappointment, reasoning that without a specialist curry chef, it may be lacking something. From the first mouthful, however, my fears were allayed, as I was treated to a rich and layered curry with a warming, mild heat from the chillies. There was an ideal balance between spice and the sweetness of the jasmine rice and sweet potato; the monkfish and prawns, as you’d expect, cooked to perfection.

Whilst I can tell you that G’s fish and chips looked refined and the two fish as perfectly battered as any fish and chips I’ve seen in real life or on telly, I can only tell you about the bit I was allowed to taste: and let me tell you that one chip and singular scoop of mashed peas were as delicious as the whole meal looked!

Determined not to get in a mood because I wasn’t allowed any more, I chivalrously suggested we look at the dessert menu, from which we followed both of our guides’ recommendations and ordered the chocolate bombe and vanilla cheesecake. Whilst the cheesecake brought the elegance to the table, the chocolate bombe delivered the theatre: served with vanilla ice cream, the bombe was melted before our eyes as Erika poured the hot salted caramel sauce over it, revealing the honeycomb centre. Tasting as delicious as it sounds, I am drooling all over again whilst writing this. And that wasn’t even mine. 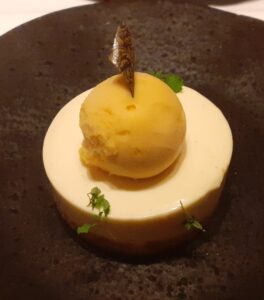 I had ordered the cheesecake, served with a mango and passion fruit tropical sorbet and a passion fruit sauce. This was somehow both light and rich, and wonderfully refreshing after the warmth of the curry. Each element exquisite in its own right, together they formed the most luxurious denouement to such a sumptuous feast.

After more than three months of not being able to dine out, our first trip to a restaurant was always going to be a treat, but the whole evening surpassed our greatest expectations. The food was exceptional, the service friendly and flawless, and the atmosphere, far from what we’d feared post-lockdown, was bright and buzzing. They’ve clearly thought about post-lockdown measures and how to keep their staff and patrons safe; and they’ve also thought how to preserve their unique ambience, and ensure that “dining at the Ivy” is as magic and memorable as such an evocative sentence promises.