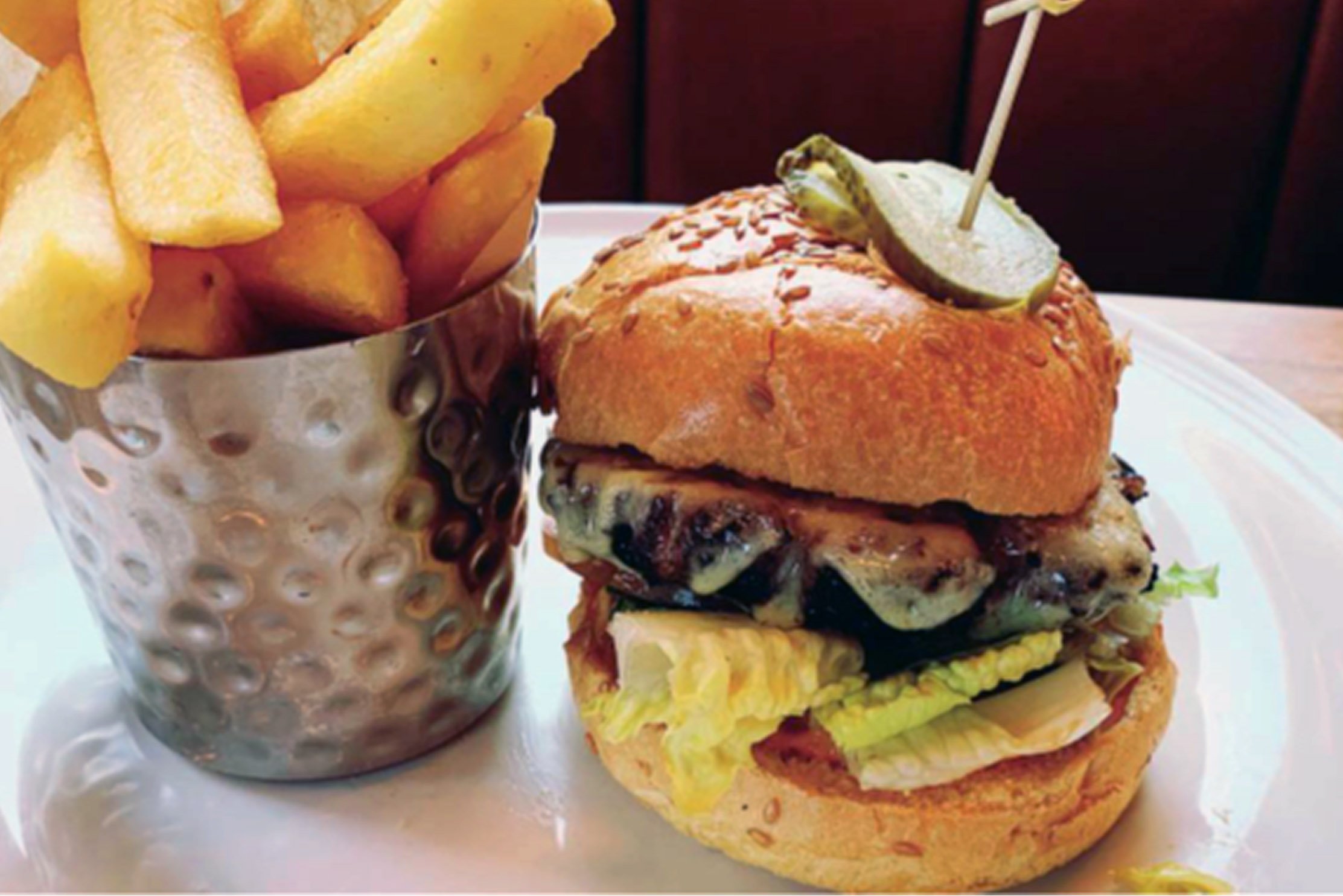 Preston Park would certainly count as one of my happy places in Brighton. Whether it’s being far too drunk and doing some incredibly cringeworthy dancing during Pride, or strolling through as the sun sets and seeing all the healthy people jogging. I frequently have to remind myself that I do in fact own a pair of legs and that if I occasionally used them for running then my arse wouldn’t be getting so big. On this particular Wednesday there was an usually bright sun in the sky and I had a general feeling of contentment as I ambled along to The Park View, which as the name suggests, is a mere stone’s throw away from the park on Preston Drove. What was immediately notable was how busy it was for midweek. The tables outside were nearly all full, and there was an undeniably busy and excitable atmosphere upon entering. We were greeted by smiley Georgina and shown to a lovely table near a rather fabulous marble fireplace. The décor is effortlessly modern while still displaying nice touches like the large plants and Art Deco chandelier – it has managed to be both unpretentious and aesthetically pleasing which

I’ve noticed is often a coupling that Brighton pubs find difficult. We surveyed the Vegan friendly menu and settled on Fried Squid with a sweet chilli glaze (£6) and Vegan Tikka bites with raita sauce, mango chutney and flatbread crisps (£6). I have to give full disclosure and say I can be slightly sceptical of Vegan food that purports to taste like meat, however when the Tikka bites arrived and I cut into them I initially thought there had been a mistake and that we had actually been served the meaty version of the dish! They tasted fantastic and the texture was spot-on. The flatbread crisps were huge, fantastically crunchy and ridiculously moreish when eaten with the raita and mango chutney. The squid was unlike any squid i’d had before as it had a beautifully sticky yet crunchy outside while remaining succulent inside. Squid is such a nice ingredient but is often woefully overcooked so it is nice to be able to report that the chef behind this dish knows what they are doing. 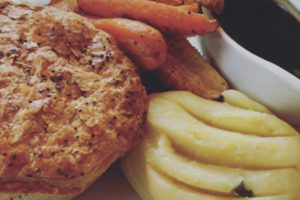 While choosing our mains of Chicken, portobello mushroom, leek and pancetta pie with roasted root veg, red wine jus and mash (£11) and chargrilled beef burger topped with cheddar and served with gherkin and fries (£12) we ruminated on what we wanted to drink and settled after some words of advice from the helpful Talia on Gin, a spirit so luscious that if it had a face I would snog it. We worked our way through a fair few fantastic gins but my favourite had to be the Raspberry flavoured Whitley Neal served with fresh berries and Fevertree Mediterranean tonic (£9 for a double). Tasty, refreshing and brilliantly fruity it was like sunshine in a glass. Palettes cleansed (well that’s my excuse anyway), I started on the pie which was positively bursting with filling while still remaining incredibly light partly owing to the wonderful puff pastry. The mash potato was smooth and fluffy and the root veg was still perfectly al dente. The lovely meal was completed by a flavoursome gravy that had a glorious shine to it. Onto the burger which was everything a burger should be well seasoned, beefy and nicely cooked. The chips were absolutely gorgeous and if I’m honest I didn’t really feel like sharing them with my dining companion!

Dessert-wise there were some really appealing options, but the moment I spot a chocolate brownie on the menu it is pretty hard to persuade me to look elsewhere, so I didn’t and quickly indicated to the lovely Kirstie that I would like their Brownie with hazelnut ice cream (£5.50) and why not throw in a Sticky toffee pudding with bourbon ice cream for good measure (£5.50)? My brownie was remarkably chocolatey and rich tasting and the accompanying hazelnut ice cream was a thing of beauty. I ate it so fast that it looked like my greed had performed some sort of magic trick. I tried the sticky toffee pudding and it was gooey, unctuous and coated my tongue in an incredibly satisfying manner. Really quite full but in a good way I reflected on what a brilliant job they are doing at The Park View. I’m already planning on ditching the unappealing, lacklustre Summer picnics and heading on by after my trips to the park whereby I inevitably drink too much cava and dance like an idiot and continue to watch the joggers as my arse gets even bigger.

The Park view is at 71 Preston Drove, Brighton BN1 6LD