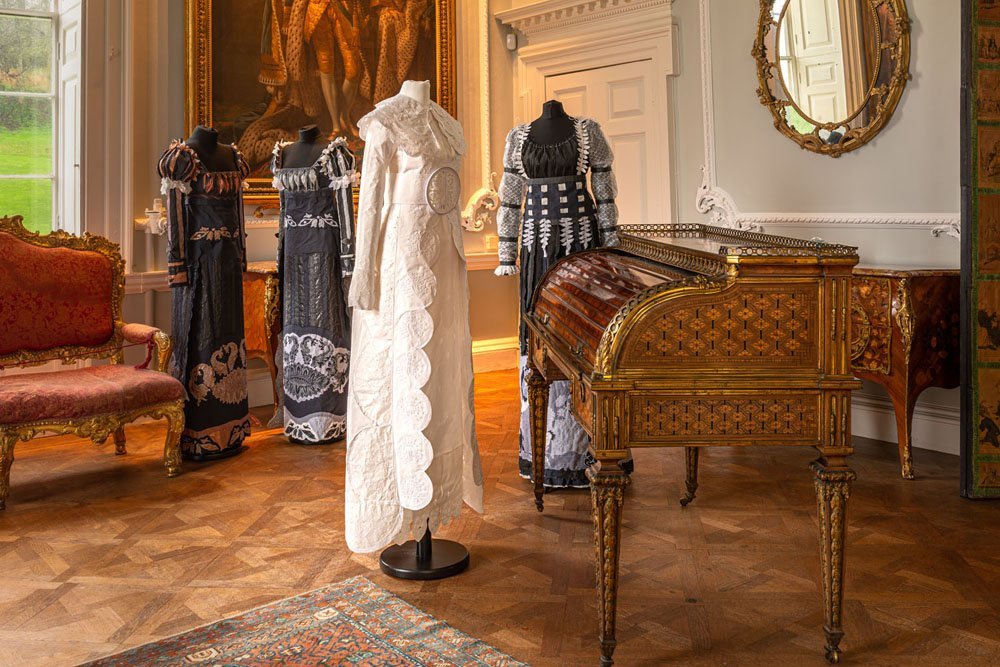 The Regency Wardrobe at Firle Place

The Regency period offered a profound impact upon these British Isles. It was a time of seemingly limitless potential, with global trade bringing a barrage of new sights, sounds, influences and ideas. And this filtered through to distinct trends in British architecture, literature, politics and culture. In many ways it was the beginning of the consumer age, mass production and materials from every corner of the globe bringing in wider and cheaper choices. This was reflected in the era’s fashions, which underwent a huge flux – bridging the gap between Georgian decadence and Victorian morality. British-spun materials became more desirable than their foreign counterparts, which slashed their price to ordinary consumers. Although, as ever, sacrifices in the name of sartorial elegance did have consequences. “Apparently there was a great outbreak of flu, because all these women were walking around with hardly any clothes on,” textile artist Stephanie Smart tells me, reflecting on the period’s craze for increasingly sheer fabrics.

“Regency” is a flexible concept, roughly occupying a time between the French Revolution and Queen Victoria’s accession. Smart has refined her area of interest to 1795-1837 as she works on her show, The Regency Wardrobe – an exhibition charting how clothing norms were suddenly redefined.  Coming to the wholly appropriate surroundings of Firle Place, on Sun 29 Aug – Tues 26 Oct, it draws together an exquisite collection of 11 Regency costumes and accompanying accessories.

Constructed entirely with paper and thread

Working closely with volunteers from The Regency Town House Heritage Centre in Hove, she has reinvented the substance, techniques and trends of this iconic era. Well almost. While the designs might be authentic, the materials deployed are less traditional. Smart hasn’t made her gowns and daywear from the finest cottons or satins. The entire collection, from dresses and shoes, to fans, jackets and bonnets, have all been constructed entirely with paper and thread.

Her fine art studio, The House of Embroidered Paper, employs paper craft and embroidery, all inspired by period and place. Rolling, shaping and gluing, Smart conjures incredible recreations of embroidery, lace and haberdashery. “When I worked with glass, I used to say it’s stronger than it looks, but it has a mind of its own. The same goes for paper. You can do lot with it, but it doesn’t always do what you want.” From tissue paper to disposable tablecloths, there’s almost no processed thin sheet material discounted in her designs. As her work has evolved, she’s brought in new techniques, like quilling or Mizuhiki (a Japanese paper cord technique), all adding different layers and strengths to pieces.

As the exhibition seeks to reinterpret Regency styles rather than directly copy them, she’s insisted on not following patterns or mimicking original items. “I really admire people who can make garments from patterns. There are logical ways, over the years, in how garments are constructed. I’ve always believed with art ‘if you look hard enough you see into it’. And it’s the same with clothes.” Initially studying decorative arts, and starting with glass creations, Smart has moved on to occupy the intersection between sculpture and fashion. And for The Regency Wardrobe she’s expanding further, introducing music and dance to create a truly cross-disciplinary show.

File Place is the perfect setting

Just past Lewes, beneath the South Downs, Firle Place is the perfect setting for this ambitious exhibition. This family home houses a nationally-important art collection, and recently served as the location for the film adaptation of Jane Austen’s iconic Emma. The arrival of Smart’s show involved a certain amount of serendipity. She began her project with the intention of replicating an imagined social gathering. Research with The Regency Town House offered up five women who lived near to each other on Hove’s Brunswick Square, so a scenario was developed where they might meet at a party.

A search of records held at The Keep (East Sussex’s archive repository) revealed all five were on the guestlist for the same ball. Held at the Royal Pavilion in December 1831, this was hosted by Lord and Lady Gage – the owners of Firle Place. “So, weirdly, I already had links to Firle Place, even before I’d started. So now I can show this list at the exhibition, and we can imagine that these five women might have known Lady Gage to some extent. It’s come together quite nicely.”

Leading into this has been painstaking research, with visits to museums and collections across the country to examine different pieces and determine what links them. It’s led to a show which celebrates the empire lines, sheer fabrics and the surging influence of military dress. Smart and her volunteers have put a tremendous amount of experimentation into getting the correct look for each piece. “There was a technique called Rouleau, which is used as a decorative trim. I looked at how you do it in textiles, and it’s a thin tube of fabric which is pulled inside out. In paper that just wasn’t going to work. One of the people at the Regency Town House achieved it by rolling paper. It took her hours to make these decorative shapes which we can bend onto the front of pieces.”

The exhibition is a beautiful representation of a period which saw major and long-lasting changes to the way people dressed. Trousers replaced breeches. Stays became underwear, and women’s clothes became lighter and more flowing. And with her unique approach, Smart hopes The Regency Wardrobe evokes a range of different factors, from fashion to the historic, from this period of incredible change. “I want to make people think when they look into them. Art can be appreciated on various levels, and some people will just want to look at them as pieces of craft. So, I put a lot into the details. But if people want to look further there is more.”