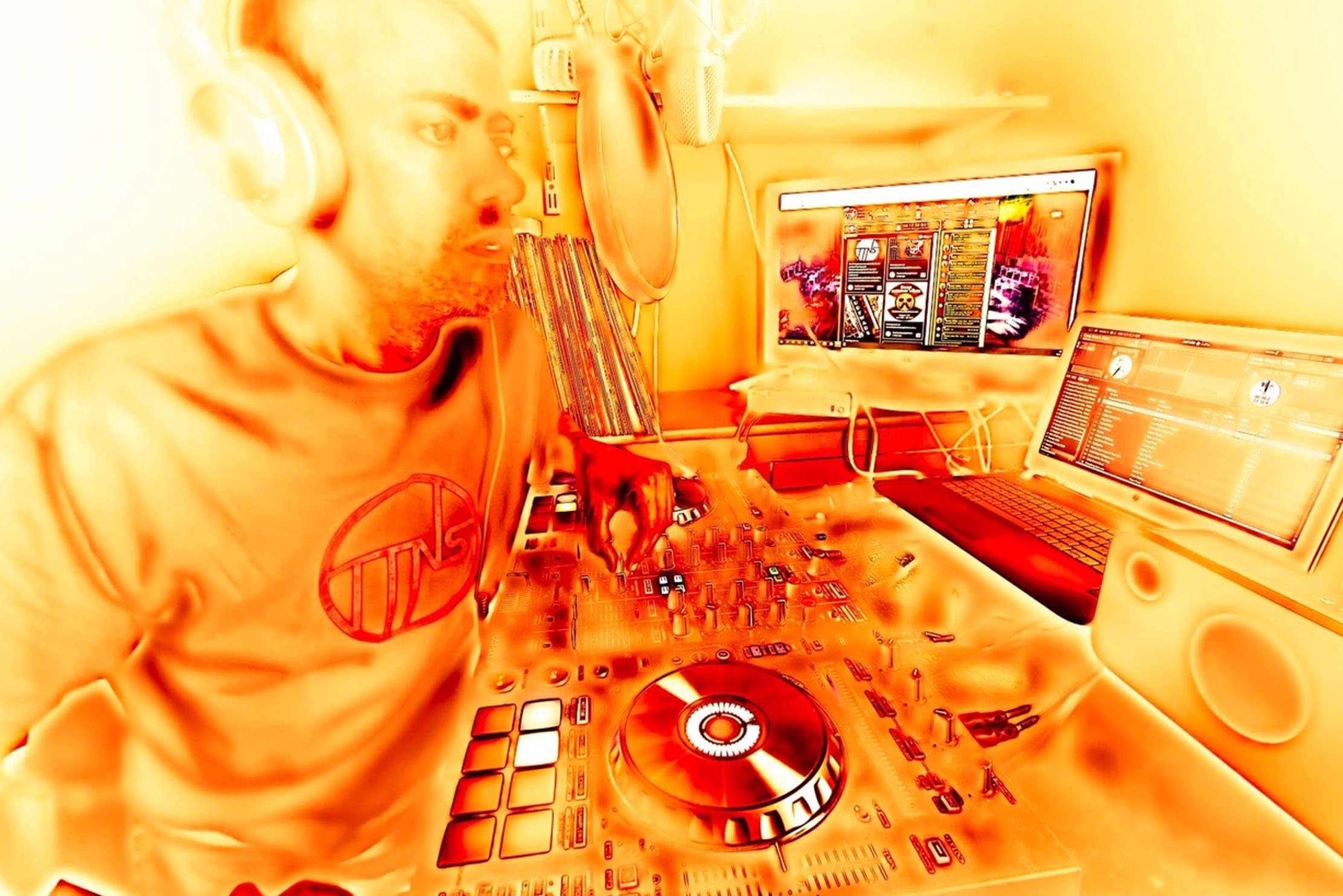 Social interaction has been forced to redefine itself during lockdown. The inability to physically meet each other has driven vast swathes of friends onto the internet. Despite the dependence on technology, it’s revealed a more human aspect of communication and helped many of us establish deeper-shared interests. Riding this wave is the heavenly, but slightly unruly, sounds of TheThursdayNightShow (TTNS) – a music streaming platform with a big heart. “The freedom of the internet gives a diffusion of choice,” says TTNS creator, Dom Robinson. “One of the things we’ve never tried to crack is building audience numbers. We’re not really doing it for that, we’re happy if there’s one person in the chatroom saying: ’Wicked tune.’ That’s made it all worthwhile.” With a spiritual home on the internet, but physically based in Rottingdean (with a third of the crew living locally), TTNS has seen its light-hearted, music-focussed programming build a truly global community. 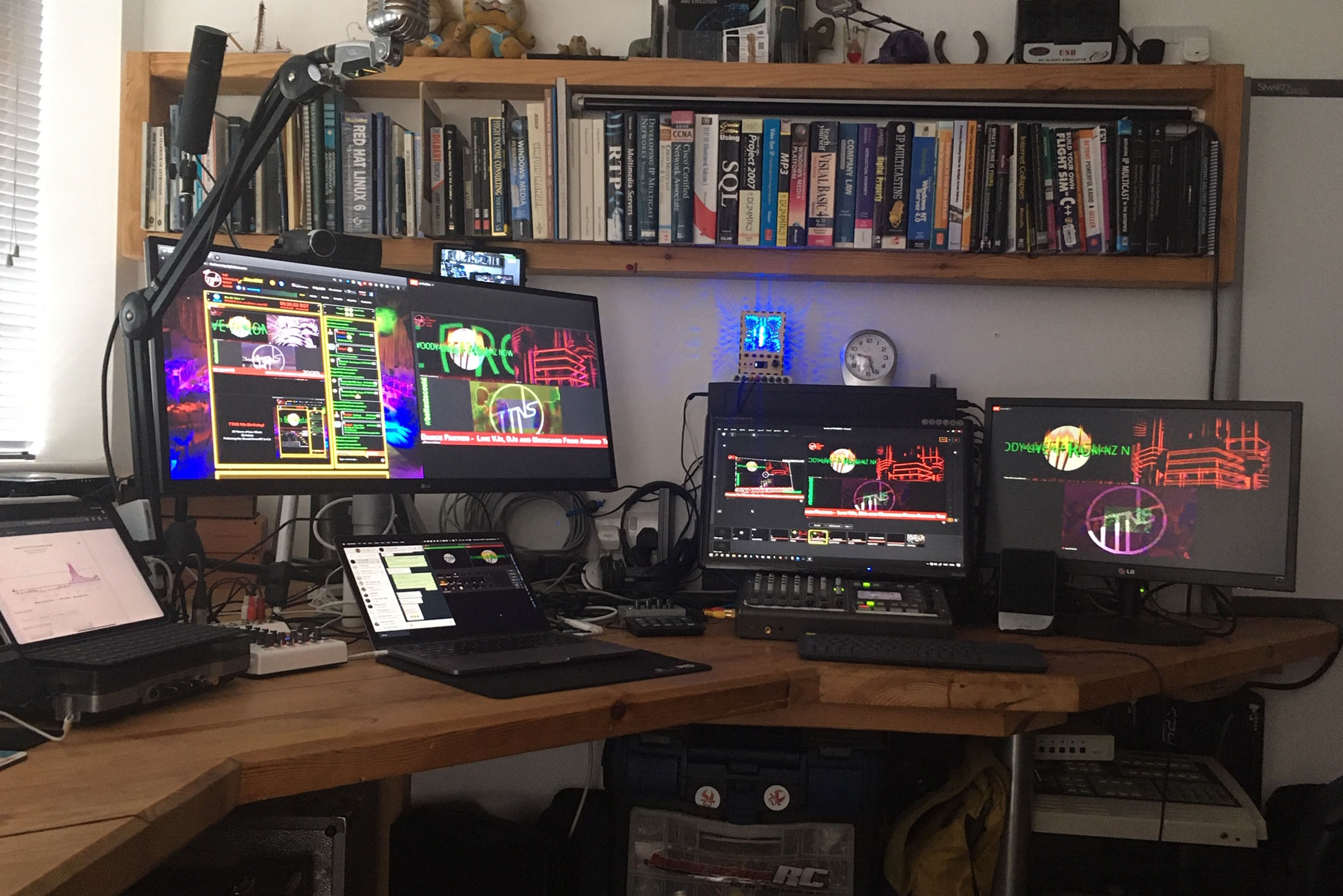 In his day job, Dom develops streaming infrastructure for corporate clients. He was involved in the setting up of MP3.com and has run webcasts for Fatboy Slim and Glastonbury. Involved in the industry for 25 years, it’s safe to say he is one of the pioneers of the technology. Everything can be traced back to the heady days (or nights?) of the 90s, where he used to run Café Exposé at Brighton’s original Concorde. Every Sunday evening, this much-loved and slightly ramshackle venue, perched above the Sea Life Centre, would welcome a broad selection of unannounced acts. “We bought in the audience and never told them what the acts were going to be. It was very eclectic and fun. It became the chill-out for all the ravers, people would go out and get mashed on a Saturday night and end up in there.” The experience taught him a lot about organising and engaging with a community. One of the last shows he staged involved a live link-up with the Ministry Of Sound, which triggered an interest in the possibilities of live streaming.

After some trial and error, it became apparent that the biggest opportunities were not with music, but with finance and sports events. The entertainment industry was still moving quite slowly in adopting any new technology. After around ten years of building up his business, he realised he missed working with music. In that time, he built a farm of 600 streaming radio platforms, so created one more for him and a few mates to play tunes to each other on a Thursday night. “We were interested in creating this virtual café vibe, which didn’t use video.” His server would send out messages on social media whenever it was broadcasting. Despite being relatively small and niche, The Thursday Night Show suddenly had a solid avid audience. So, he bought the domain www.thethursdaynightshow.com, set up a webpage, embedded a chatroom and the rest is history. 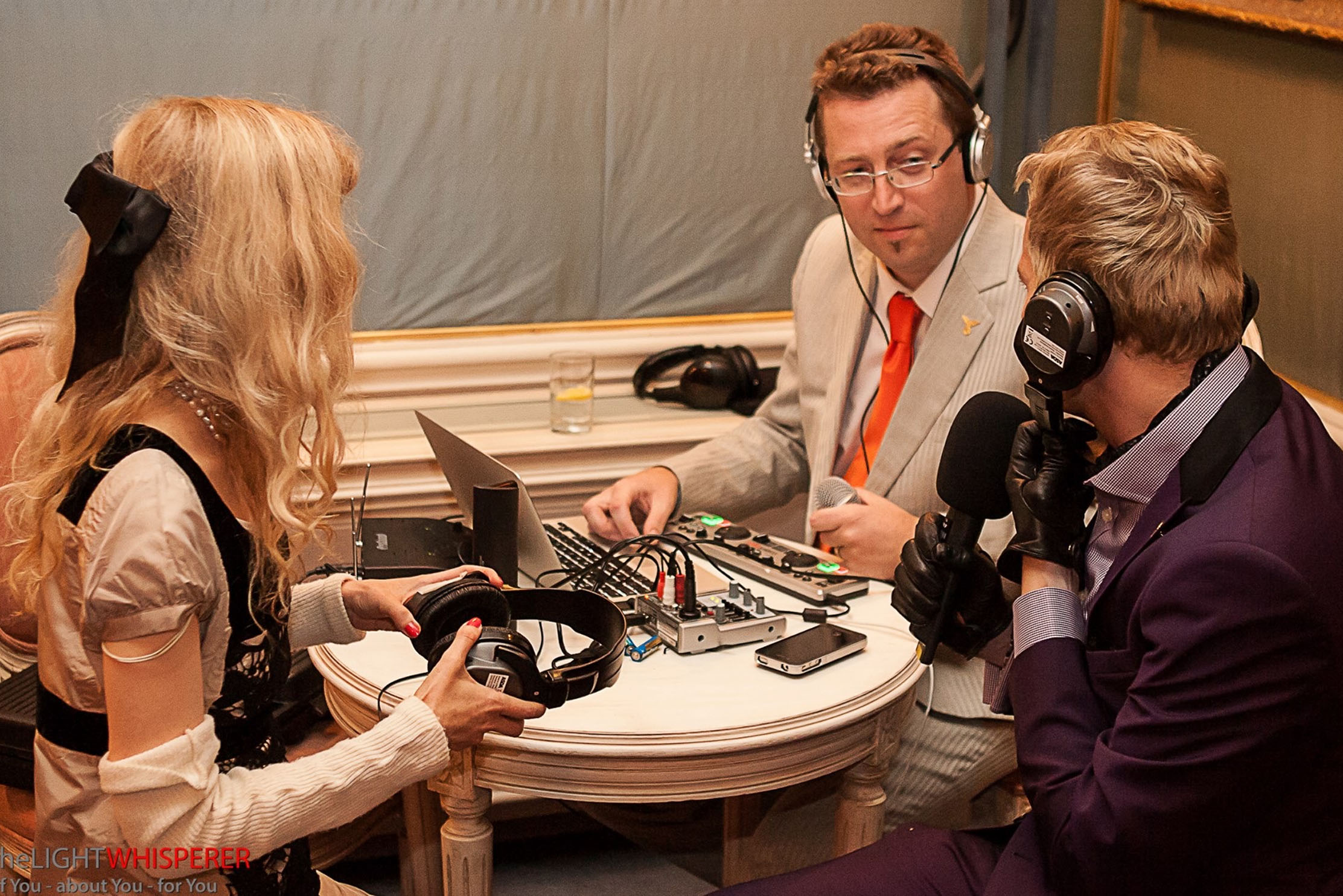 Nine years on, and his crew boasts 70 DJs across the world playing everything from techno and jungle to funk and jazz. “The aim of the project, as it’s matured, was to do 20 hours of music, following the sunset from New Zealand to California. Achieving that about a month ago, on their ninth birthday, they’re now breaking out into different networks like an Asia-Pacific group.

Soundtracking kitchen discos and late-night sessions everywhere, the listenership averages around the mid-hundreds. But lockdown has seen a big uptake in their services. Dom has started making the platform available on Fri-Weds for friends of the network who wanted to create virtual parties. Crews like Middle-Aged Rave have used it to bring together partiers from across the nation. By embedding a Zoom widget in their page, they managed to present an online club environment to almost 1000 people. “It’s gone a bit bizarre and fun.” There’s been plenty of applications for virtual parties as business conferences have found themselves heading onto the wen. The platform has also found favour amongst a range of charitable organisations, with over £6K being raised for good causes. 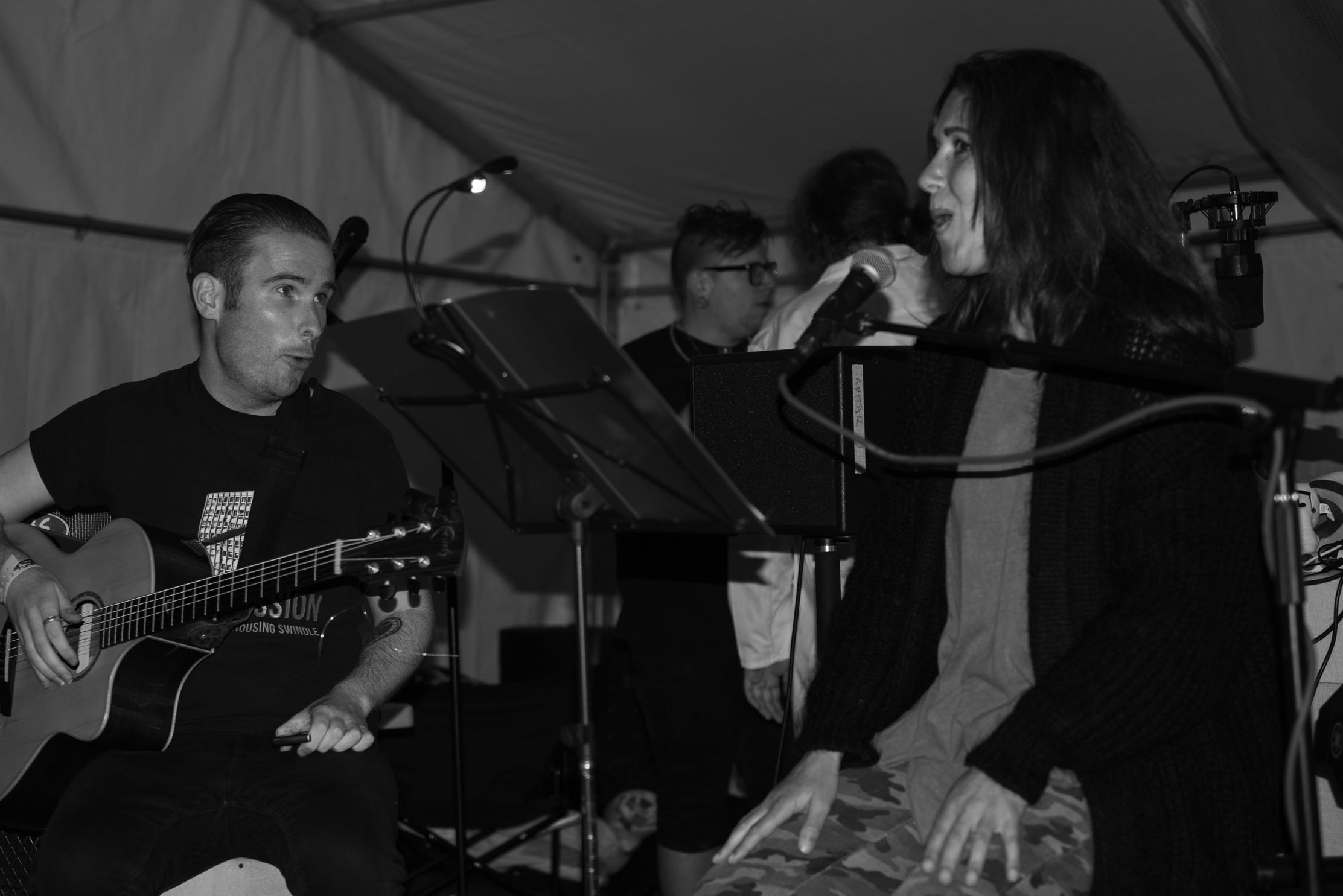 The years of experience in this field have proved invaluable, as now almost every branch of entertainment is scrambling to explore their online potential. “It’s an interesting time. There’s a lot of people who are at the beginning of their ‘journey’ who are getting quite disappointed by the experience. I went through that in the 90s, and that helps with what we do.”

The wider industry has stumbled a little in adopting, or even properly understanding, the power of available technologies. Despite having a PRS for Music licence, which entitles him to legally broadcast music, Dom has received automated demands to take his shows down. Someone had found music owned by a copyright owner, who was a member of the Recording Industry Association of America (RIAA), being made available on the show’s Amazon server. The show’s output is geo-locked, only allowing American audiences to hear live broadcasts, so accessing this archived material involved a decent amount of technological trickery. “We had 24 hours to remove it, or they were going to shut down our server, which would kill The Thursday Night Show. I got a call from the head of the RIAA. When he realised I could bore the pants off him about digital rights management platforms, syndication and authentication, he was profusely apologetic.” It highlights the challenges people face in distributing music. If a platform mixes copyrighted material and content they’ve produced themselves, the default position means you could have your service taken down. “That makes it complicated, even for some record labels.” It’s unusual for someone like Fatboy Slim to stream his music through YouTube without encountering problems.” 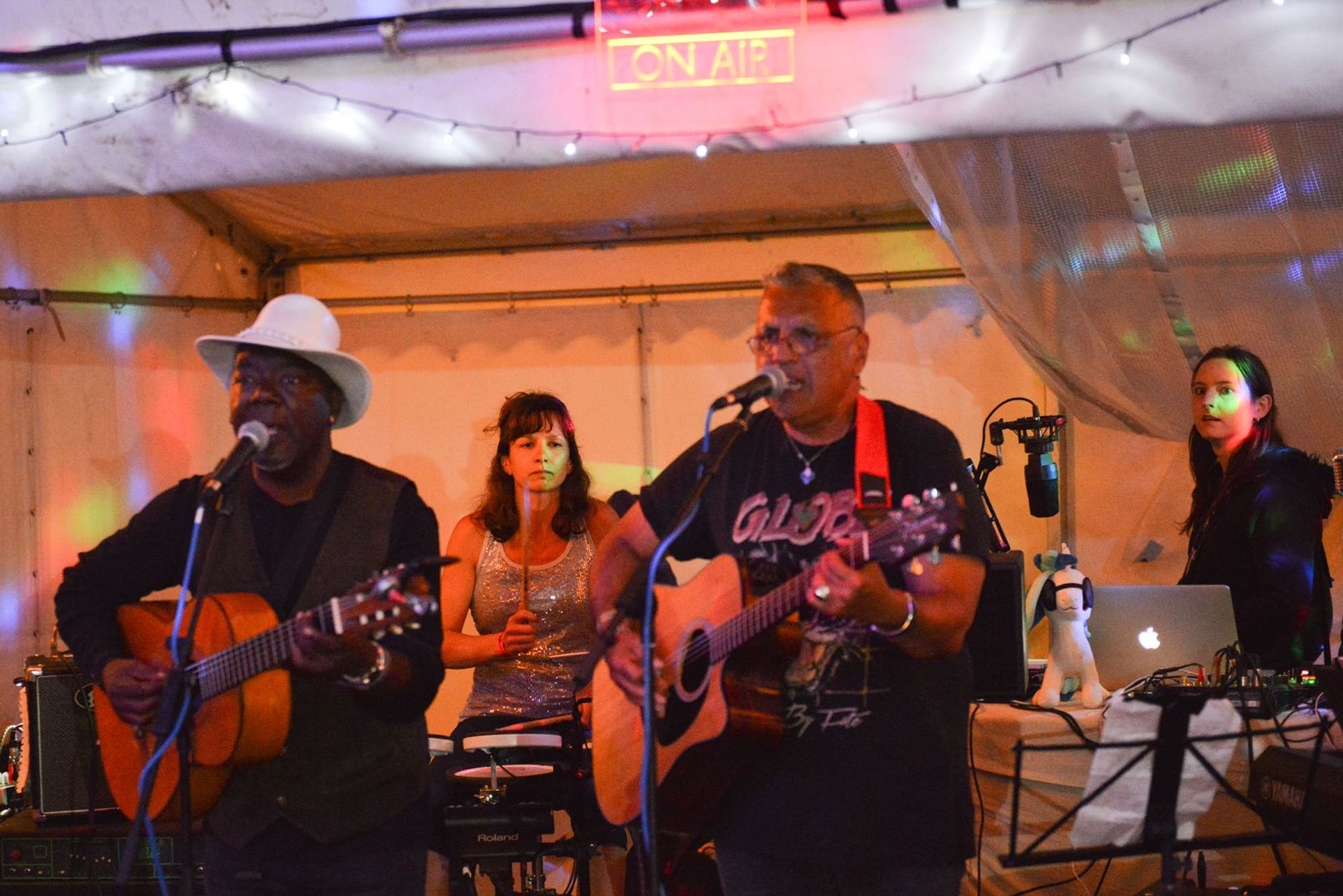 A huge obstacle for streamers is the rights industry and their rigid attitudes. “Royalties happened in the mid-30s – after 7,000 years of minstrelsy, where artists got paid to perform their music. We then had 30 years of vinyl monopoly, which created a false market of royalties.” As the industry developed, it only helped a miniscule number of musicians, refocussing music as an art form into recording. But recordings only have proper value if you hold a monopoly on the distribution of a format. And nobody has a monopoly on the distribution of MP3s. “It was an industry which had an opportunity, and that died. The racketeers who collect the royalties can still press gang internet radio stations and amateur stations. That still aggrieves me, but I stick to the letter of the law. The losers are the artists.” Greater democracy of the industry could be achieved if music makers dealt directly with the tech companies. The technology exists for artists to move into a purely IP-based marketplace, where royalties are automated, and content is more difficult to pirate. Yet, the recording industry has been painfully slow to adapt.

As the TTNS community has flourished, so has the ambition for what they do. Increasingly embracing live music, they’ve engaged the patronage of quintessential session musician Herbie Flowers – a local hero and former member of iconic bands like Blue Mink, T. Rex and Sky. The schedules now boast a diverse and exceptional list of performers. “We’ve had an outstanding array of musicians. The quality always makes my jaw drop.” The show now curates stages at local festivals, and bi-monthly events form the Big Beach Café, where Herbie’s son Nick brings in about eight acts for a Jools Holland style showcase. “They’ve all got one song changeovers, so it’s quite frenetic, but loads of fun. As opposed to a pub vibe, it’s a broadcast vibe. You’ve got to hit things on schedule.” 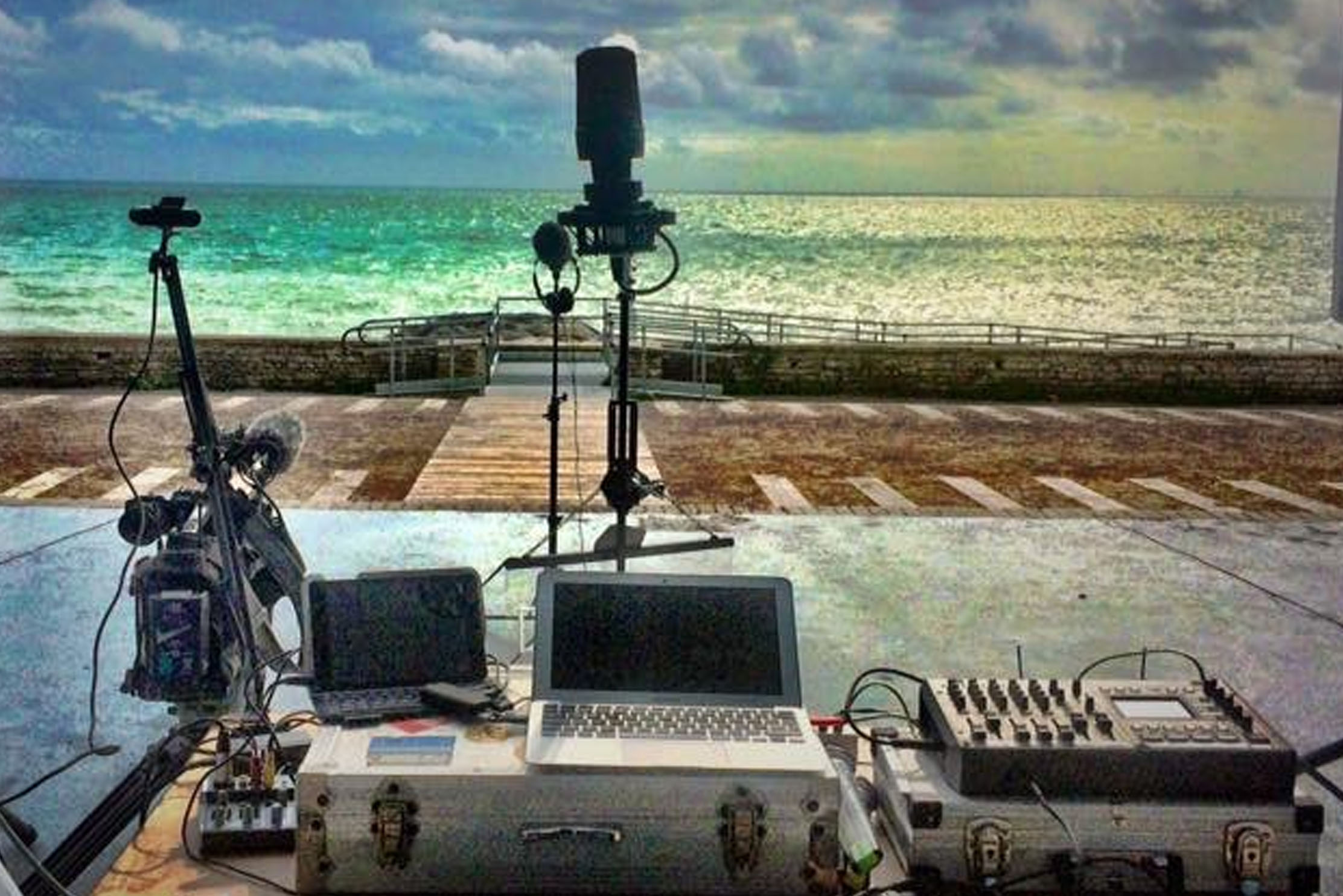 The clue being in the title, TTNS broadcasts live every Thurs 6pm – 4am. Normally playing archive material in downtime, this is increasingly being filled by projects from the community’s DJs and bands. There’s not really a music policy in the traditional sense. Everyone is encouraged to be as eclectic as possible. “The Thursday Night Show is my benign dictatorship, but in ten years I’ve only once vetoed a show. I don’t like people coming on air and proselytising. I don’t like politics. If they can express that through songs of resistance, I obviously encourage it.” He reasons the purpose of TTNS’s community is to offer a sense of escape, so should entertain instead of prompting heavy debate.

This community is at its best when interacting on the site’s chatrooms. It’s a place where anything goes, with bizarre in-jokes, gleeful randomness and a fervent love for great music. It’s clear there’s no such thing as an average TTNS listener. They’ve even managed to spawn their own genre of music. Dad-Step is an unholy blend of jungle, mixed in with odd requests from the chatroom – like ABBA, 60s folk tunes and pop songs. “Sometimes it goes cataclysmically wrong, and I take pride in that.” The chatroom plays a big part in TheThursdayNightShow’s identity. Often new listeners will drift in because a certain act is playing and then stay due to the banter. The community means different things for different people. Some might have had quite hard times, and found this virtual space, which isn’t political or engaged with their own day to day lives, has offered a welcome refuge. There is a certain magic in what they do, it seems to have created a utopian blend of good music and interactivity.  “I always joke we cornered 1/7th of the market with the name. I’ve always found it quite inspiring that if Simon Cowell wanted to buy the domain, we’d be worth 1/7th of the entire broadcast industry.”