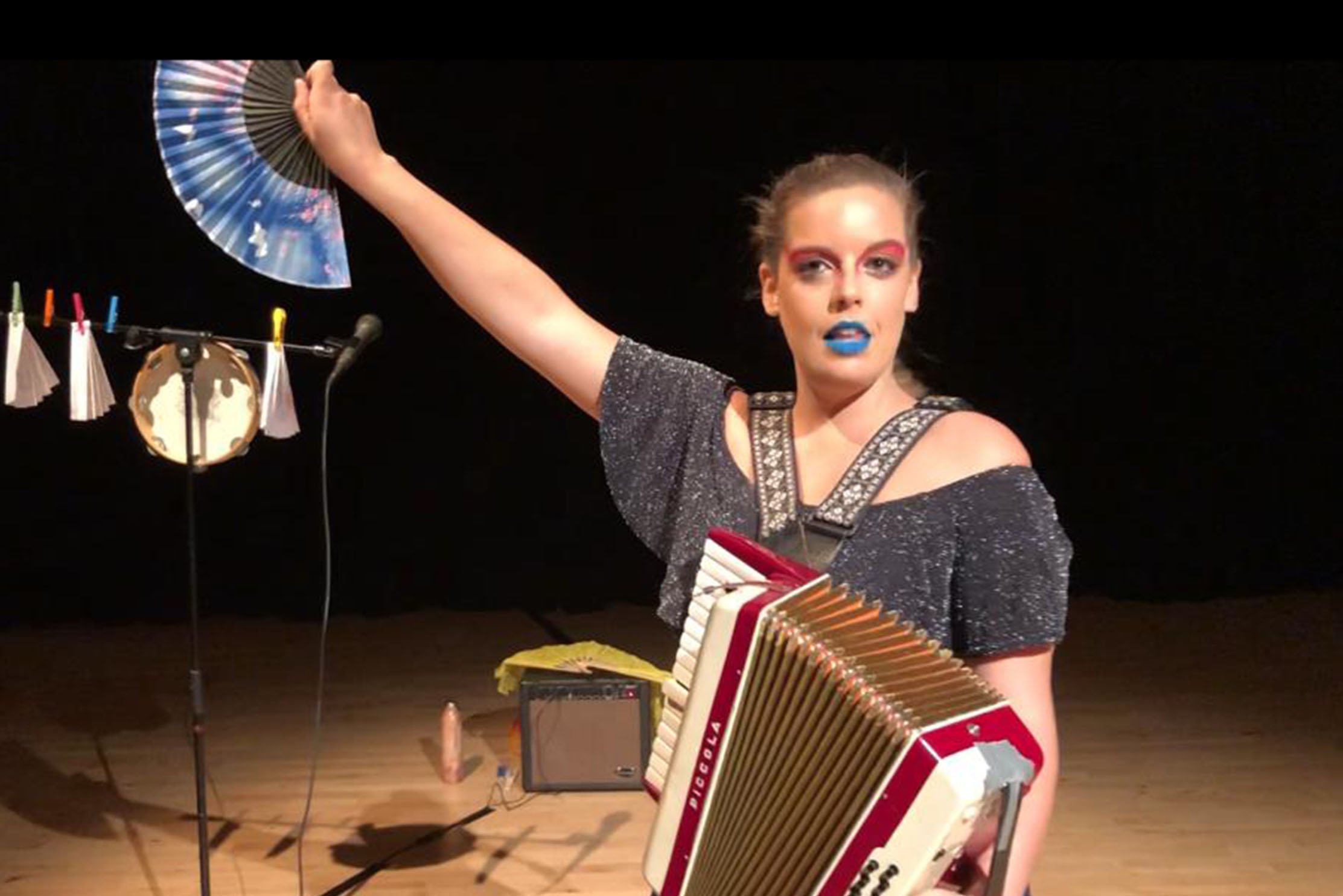 A drizzly grey evening spent inside a cold corrugated metal box in Victoria Gardens doesn’t sound like it would top anyone’s list of ‘things to do’ mid-week. But this particular box is The Nest, a section of The Warren’s higgledy-piggledy festive camp of stages, food trucks and bars. Inês Sampaio stands at the entrance, made-up with disco-blue lips and candy pink eye shadows. She smiles and chats to the audience, stickering half with orange rectangles, the rest with silver.

The show starts with Inês giving a run-down of what is expected of our small audience. She explains the tale explores themes of gender, justice and greed and invites us to absorb the evidence that is about to be presented through songs and storytelling.

At the end of the performance we will be asked to return an unprejudiced considered verdict at the end. Okay, we’re a nation hooked on crime dramas, this instruction seems simple enough. Banging on a drum, Inês’ rhythm paints us into a scene thousands of miles away from rainy Brighton.

We’re now in warm and vibrant Brazil, with sounds we imagine encapsulate the country vibrating off the walls courtesy of a loop pedal.

Standing in the village of Agreste, Inês sketches the background of focal character Tieta and her familial network. Our narrator guides us through the hard life Tieta suffered while still a child, from losing a parent, to being beaten, gang-raped and exiled by her kin and hometown for expressing her truth – that she was a woman trapped in a man’s body.

The story develops and is studded with the magical effects of the loop pedal. Inês’ crowning song had the audience provide wobbly backing vocals to a beatbox-acoustic rendition of Daddy Cool by Boney M. When Tieta happily marries a rich doctor in the UK she generously bestows sweet financial treats on her poor family and town (as well as literal sweets for the audience) in a bid to show strength of character compared to those who had wronged her years before.

The peak of the storyline arc sees Tieta return to Agreste to reunite with her only friend and estranged family. Keen to keep their gravy train, Tieta’s family and community tolerate her visit but refuse to fully accept her as a woman.

The performance ends with her offering a substantial gift to the town coffers that comes with a hefty and loosely-defined catch. It was these questions of forgiveness, education and retribution that Inês invited our jury groups (this is where the orange and silver stickers came in) to discuss and rule on.

This wasn’t such a simple judgement when you’re dissecting concepts as large as right and wrong in a two-minute chat with utter strangers. The threads of identity, family, gender and compassion were examined with surprising depth in the space of roughly an hour. It helped that the dialogue was sharp, to the point but softly humorous in its delivery where needed.

It was a gentle education of an incredibly urgent topic as 445 LGBT Brazilians died as victims of homophobia in 2017 – a 30 per cent increase from 2016, according to LGBT watchdog group Grupo Gay de Bahia.

In a theatrical sense, Inês’s performance was radiant and engaging. Her musical talent is enviously impressive, with a strong honey-voice and a can’t-put-your-finger-on-it charm to her acting skills that people would give their right arm to bottle up.

As one woman playing the band, narrator and cast in this tale, Inês confidently wore each hat with finesse and wielded a catalogue of imaginative uses for the humble hand-fan.