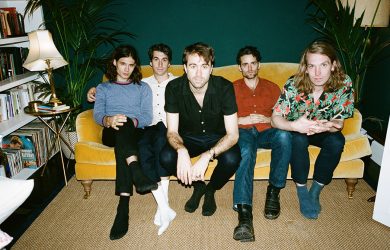 BN1 chats to… The Vaccines

Sophie Williams talks to the band’s bassist Arni Arnason about the departure of the band’s drummer, its subsequent effect on their fourth studio album, plus their reaction to Stormzy at Glasto…

2018 may have been an ordinary year for many people worldwide, but for The Vaccines, this year has been quite the opposite. Extraordinary, if you will. From supporting Imagine Dragons on their European stadium tour to opening for the Rolling Stones at their show in Southampton, to say indie rock band The Vaccines have had a turbulent and busy eleven months would be an understatement. They’ve been so busy in fact, it took us two attempts to get hold of bassist Arni Arnason, who had to reschedule our interview as he was just about to go on stage to play at a festival in Shanghai.

On the second attempt we caught him in Thailand, where he had a couple of hours spare until he had to go and play another show. “Can you hear me?” he queries. “I’m in the middle of a festival field in Thailand.” Of course he is.

After the release of their most recent album Combat Sports, which dropped earlier this year, Arnason tells us how much of a struggle it was to get the album “where we wanted it to be”, especially after their drummer Pete Robertson decided to call it a day.

A major change like this will of course exude doubts internally, as the bassist explains it was an obstacle as full frontal as one could imagine and needed major thought and attention. Arnason said of the matter: “The process just gave us a lot of self-reflection. Combat Sports is a really self-reflective record. It is about life.”

Some might say that the departure of Robertson was what led The Vaccines on a path back to their rock and roll, power pop roots, something that has since proved both popular and successful for the band. “Returning to our original sound was by no means a step backwards for us,” Arnason confirms. “It felt more like a celebration of us, you know? It honed in on what we were good at and embraced the aspects of what makes us a good band, and ultimately, I think we are a good band.”

The release of the Vaccine’s latest single All My Friends Are Falling in Love is a prime example of this, the distinct guitar-led sounds and catchy pop chorus re-cementing the band at the forefront of the UK’s indie-rock scene. Speaking of their new single, their longevity as a band and their forthcoming tour, Arnason says: “Over the last eight years we’ve accumulated fans for very different reasons. There’s a nostalgic fan who we meant a lot to when they were eighteen in college and there’s a new fan who has just discovered our new album, but in the midst of all this, there’s a broad sense of joy that is really prevalent at the moment and that’s something I can’t wait to bring to the UK in the new year.”

The Vaccines will embark on a 14-date tour in 2019, with Brighton being one of their first stops. After a string of international festivals, January will see the band playing their own headline shows each night, something they haven’t been able to do in months.

Being no strangers to festivals, the band has spent many a summer playing the UK circuit. After eight years and four albums in however, the indie rock band are still yet to secure their debut festival headline. With Stormzy’s Glastonbury headline slot having just been announced with just one album to his name, curiosity overwhelmed us and we wanted to listen to Arnason’s take on the matter. “I think it’s fucking cool,” he enthuses, “I think it’s about time. How many albums you’ve done means nothing compared to your social and cultural importance and having a grime star headlining somewhere like Glastonbury, I think it’s about time.”

We seem to have touched upon a topic that The Vaccines bassist feels very passionate about, his dynamic responses spilling through the phone at a hundred miles an hour. Already extremely bubbly and chatty, you can tell this is a topic he really wants to talk about. “You just seem to have recycled headliners now,” he says, “It’s always three rock bands and a heritage act and that’s about it. When you look at festival headliners these days I feel like I could probably guess them year by year and 80% of the time get them right.”

The Hope & Ruin opens in Brighton

With Glastonbury being the most iconic platform and headline slot in the UK festival scene, it is refreshing to see an artist that doesn’t fit the typical ‘rock band’ criteria being presented the opportunity. “I’m super happy that Stormzy is doing it,” he says, “I think it’s fucking awesome.”

Even without the Glastonbury headline slot, The Vaccines have been and are still incredibly successful in their own right. Having sold over one million records worldwide and having supported legendary artists such as The Stone Roses, Arctic Monkeys and Muse, The Vaccines are very much a well-loved British national treasure. “It’s just so incredibly flattering and so full of emotion to be appreciated the way we are,” Arnason tells us, “when you meet people who look at you as an inspiration, it really is surreal and very humbling.”

You can catch The Vaccines at the Brighton Dome on Fri 25 Jan 2019.