by Stuart Rolt
in ART & DESIGN
0

The exhibition features artists living and making locally in Sussex, Kent and Hampshire, as well as those working and exhibiting nationally and internationally. The Brewers Award of £10,000, sponsored by Brewers Decorator Centres, will be given to one of the exhibiting artists along with mentoring from the Towner team. “Towner’s location on England’s South Coast has been at the core of the gallery’s identity for almost a century,” said Noelle Collins, Curator, Exhibitions and Offsite, Towner Eastbourne. “We wanted to work with artists who have made work in some way reflective of this, allowing us to draw together viewpoints on landscape, borders, migration, environment and identity.”

Towner International hopes to address how artistic communities are recording and responding to the economic, political, cultural, and environmental changes that are unfolding across the world today. These themes will be explored through work in a wide range of mediums from photography and moving image to sculpture, installation, ceramics, painting and print.

Video works reflecting on the geo-political situation in Iraq and textiles reworking ideas of colonial photography will sit alongside reflections on diasporic cultural displacement, memory, trauma and environmental destruction and devastation. Notions of identity, community, collaboration and time are also threaded through Towner International, addressing these themes from both a global and domestic socio-political viewpoint.

Ten artists have been chosen from the regions of Sussex, Kent and Hampshire, and ten from elsewhere across the UK and four from international locations. “We had a great reception to the open call for Towner International,” said Joe Hill, Director, Towner Eastbourne. “The quality and range of submissions has been really impressive. Connecting the work of those living and working in our region with those creating globally will be a really exciting starting point to curate a major exhibition for our galleries this Autumn.” 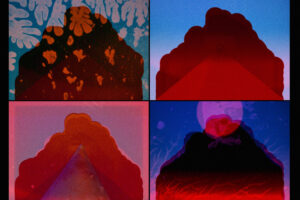 Benedict Drew’s video installation The Bad Feel Loops (2019) uses the language of noise, feedback, rhythm and repetition to invoke the feeling of anxiety, and invites the viewer to stay with that difficult feeling until it becomes an almost ecstatic experience. This work attempts to give form to the subjective experience of anxiety from within , and explores the potential value of staying with the experience of chaos or crisis, rather than trying to silence it. This work was filmed on the Kent coast.

Great Expectations (2015), continues Adam Chodzko’s exploration of the remote and intimate connections between people, across time and space, by focusing on a historical narrative relating to a collection of tools, a tool chest and the actions surrounding these objects enacted between a father and son. Chodzko speculates on how we might be able to break with continuity through becoming embodied, stuck within an object, in order for it to carry us forward in time, concealed, until ‘the right time’ for us to reappear.

Ailbhe Ní Bhriain The Muses (2018/19) features a large-scale Jacquard tapestry that combines early colonial portrait photography with imagery of quarry walls. The colonial archive is considered here in its duality as both cultural record and cultural disruption – its surface act of preservation belying a deeper act of destruction. The translation to tapestry draws on the fetishisation of fabrics within the genre of colonial photography.

Alexi Marshall works primarily in print, fabric, drawing and embroidery, investigating themes of spirituality, sexuality and womanhood. Marshall’s linocut ‘Your hair was long when we first met’ (2019) is full of references to myth, tarot, religion, music and artist biography. The biblical tale of Samson and Delilah plays out in a theatre of human and animal-hybrid figures.

Arpita Shah’s ongoing photographic series Nalini (2019 to present) includes studies of her mother, Grandmother and herself, and explores how migration, distance and loss have shaped their lives. Shah spent the earlier part of her life living between India, Ireland and the Middle East before her family settled in Eastbourne. This migratory experience is reflected in her practice, which often focuses on the notion of home, belonging and shifting cultural identities. Shah’s work tends to draw from Asian and Eastern mythology, using it both visually and conceptually to explore issues of cultural displacement in the Asian Diaspora.

In Ayo Akingbade’s Dear Babylon (2019) the future of social housing is threatened by the AC30 Housing Bill. Set in London’s East End, a trio of art students are eager to raise awareness about their neighbourhood especially the lives of tenants and people who work on the estate. Dear Babylon is the final film in the No News Today social housing trilogy.

Carla Wright is an artist working in sculpture, functional ceramics and participatory projects. Her work explores social housing, communal architecture and play structures. Focussing on co-operative ways of living, collaboration and community and child-led organisation. For Towner International, Carla will present a selection of ceramic tiles and ‘climbing frames’.

Cuneiform inscriptions on Mesopotamian clay tablets prompted Jonathan Baldock to explore their contemporary counterpart, the emoji. The ubiquitous shorthand for emotion is the fastest growing pictorial language of our time. The digital is made tangible, translated into a series of colourful ceramic faces or ‘Maskes’ which are punctured, sculpted and glazed to suggest a myriad of expressions. Exhibited works made 2019 – 2020. 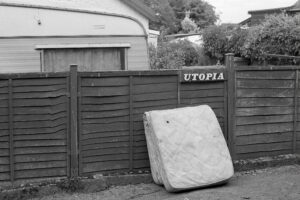 Land of Cockaigne: Travels through Brexit (2016 – 2019) is a series of black and white photographs by Ian Land, taken while walking the coastal route from Hastings to London as the country grappled with the possibility of leaving the European Union. He says, ‘As I walked, Union flags seemed much more prominent than I recalled previously, the multitude of Keep Out and Private signs which had always been there took on a sinister air’ … ‘For the first time in years, Englishness and the English landscape began to feel alien and forbidding to me’

Jack Shearing Night Pool 1 and Night Pool 2 (both 2019) explore memory and the artist’s relationship to certain places and environments through painting. Recurring motifs such as figures, windows and landscapes appear in his works, through built up, layered surfaces.

Joe Packer lives and works in St Leonards-on-sea, his recent paintings LeefKreep and Tenderdusk, (both 2019) are not sited in one specific location they are skilfully crafted in brushstrokes that resemble lush vegetation, recalling the dense tangle of growth in nature.

Julia Crabtree and Will Evans’ installation Seep, Tract, Clenched, Swell (2018) is a form of landscape, consisting of a self- sustaining system including water, plants and other cohabiting entities. The artists reflect upon the macro and the micro, from the seismic landscape to an amoebic microorganism at a time when nature and bodies are evolving, co-mingling and collapsing. Their work embodies material connections with human hybrid origins and their messy entanglements, from the half-wild and half-manufactured ecosystems that produce our food to the gut biomes that digest it.

Maeve Brennan’s, Listening in the Dark (2018) gathers a series of subtle but penetrating soundings of human beings’ impact on the natural environment. Taking the interaction between bats and wind turbines as its starting point (bats’ lungs explode in a localised pressure drop caused by the moving turbine blades), the film traverses geological, ecological and human time spans to navigate the complexity of the Anthropocene. Commissioned for the Jerwood/FVU Award 2018.

Marianne Fahmy’s framed film stills (from her video work 31 Silent Encounters, 2017) trace a non-linear conversation based on love letters written in Egypt in the 1950’s between a communist activist in prison and his wife. Through these extracts it becomes apparent that social and political problems begin to emerge over the couple’s feelings.

Mohammed Sami’s large-scale paintings of everyday objects and domestic interiors explore personal memory and trauma. Sami immigrated to Sweden as a refugee from his native Iraq and his paintings explore how trauma can be evoked in seemingly banal environments, this imagery counters common representations of conflict and violence.

Mu-Tien Tammy Ho is particularly interested in domestic spaces and architecture as metaphors. Her practice engages with time and memory in scenes of everyday life, the spaces where human activity takes place and the cultural phenomena within them.

Omar Vega Macotela’s engraved porcelain artwork The Salviati World Map (1525) (2019), presents a view of the world where the American continent was a place without a name. Instead of illustrating an imaginary terrain, the Salviati map emphasizes emptiness, inviting the possibility of the unknown as something that can be exploited or explored.

Paul Becker is a writer, painter, editor and musician based in Sweden. Recent paintings including Paws/Eyes (2019) present surreal moments of human/animal interactions, in this example a feline sleeping pose combines with the figure’s blue face – whose eyes are covered by what appear to be cat paws. His paintings often feature details of figures, their decorative clothing; cigarette smoke curling from the fingers of an elegant hand, the specificity of each subject suggests a hidden narrative at play.  Becker was the 2020 Abbey Fellow in Painting at the British School at Rome.

Rita Evans makes and performs sonic sculptures that become the centrepieces of live sound-based performances with multiple participants. The resulting soundscapes are characterised by moments of focus, humour, ferocity, generosity and struggle. In her recent film and performance, Coil of Days (2019/20), a series of rituals and negotiations evolve between a group of women around eight sculptural instruments.

Through painting, sculpture and installation, Ryan Orme explores the relationship between internal and external landscapes, and the role geographies have in shaping who we are. An intuitive approach to making leads him through a range of processes, and subject matter, as demonstrated in the works Mop Garden (2019) and Madidi (2019), selected for Towner International.

Sherko Abbas’ practice is dedicated to sonic and visual memory, and the geopolitical situation of contemporary Iraq. The Music of the Bush Era (2017) reveals how in 2003 the US administration airlifted the Iraqi National Symphony Orchestra to Washington for a single performance at the Kennedy Centre before President Bush.

Stuart Middleton Motivation and Personality (2018) is a substantial wooden structure with a skin of used clothing that will snake through the ground floor studio space.It’s gut-like shape replicates a ‘Livestock Management System’ from a working slaughterhouse. This architecture uses the animal’s natural defensive instinct to circle as a means of control, gradually funnelling the herd down into a single file without alarm.

Collecting an exhibiting contemporary art for almost 100 years, Towner Art Gallery, Eastbourne, sits where the coast and the South Downs meet. Led by Director Joe Hill since 2018, Towner presents exhibitions of national and international importance for audiences in Eastbourne, the UK and beyond, showcasing the most exciting and creative developments in modern and contemporary art. Towner develops and supports artistic practice and collaborates with individuals, communities and organisations to deliver an inclusive, connected and accessible public programme of live events, film and learning. Towner’s collection of almost 5000 works is best known for its modern British art – including the largest and most significant body of work by Eric Ravilious (1903-1942) – and a growing collection of international contemporary art.

25 Years of Innovation, Beauty and Culture at Fabrica, Brighton

Is graphic design becoming increasingly important in the modern age? 2020 was a disastrous year for most sectors of...

I’ve managed to keep hold of my grandpa’s old coffee table for almost a year now without somehow losing...

Summer of Sound comes to Wakehurst