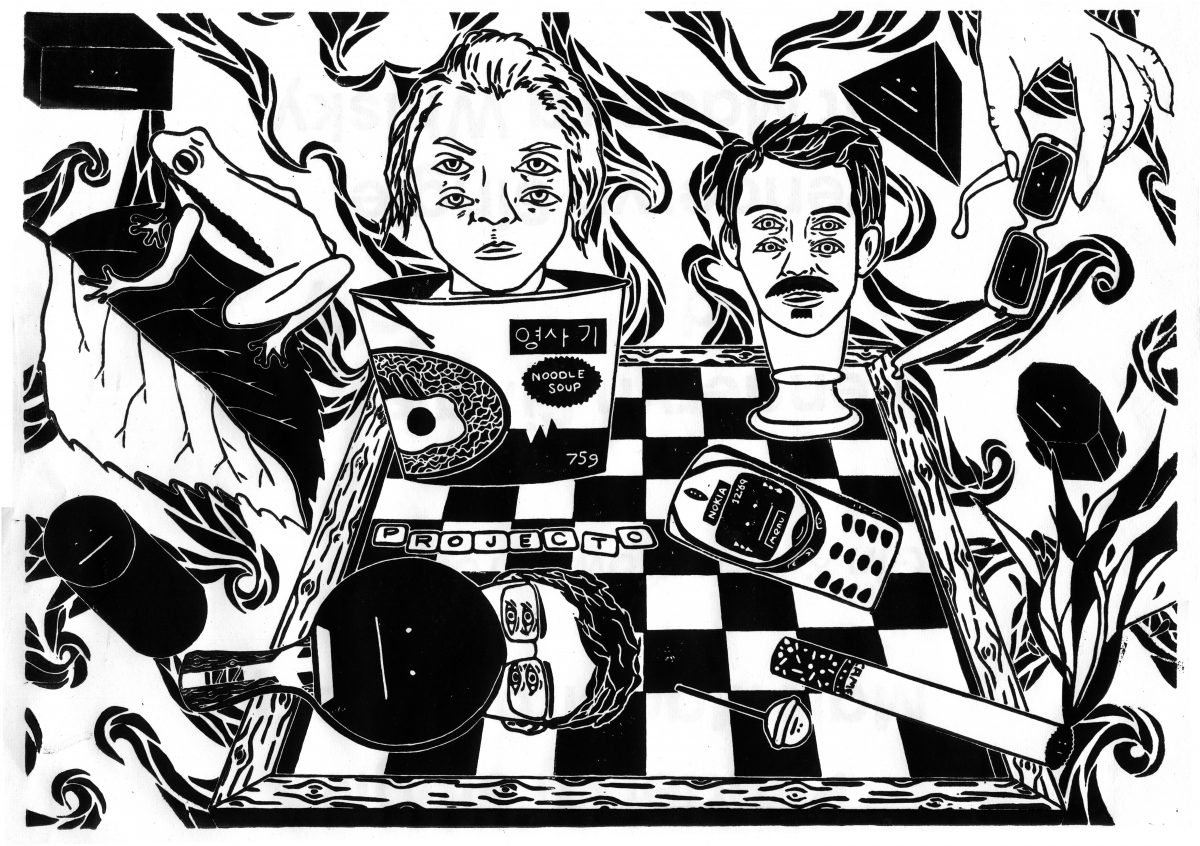 Hazel is a Brighton-based artist who came to lino cutting in lockdown. Their surreal prints range from bold, colourful figures to large-scale pieces depicting many many-eyed humans in strange, jumbled universes. Hazel’s pieces are now sought-after prints, cards and t-shirts, particularly for their attention to texture, expression and an element of dreamlike comedy. As we discussed, it’s the challenge of a new brief that excites them.

What drew you to art, and lino cutting in particular?

Since I was very young I’ve always enjoyed drawing and painting. It was a constant presence throughout my childhood and early teen years. Like most people, when I got a bit older I started to gravitate towards different hobbies, and at around 16 years old I started to focus more on music and didn’t really consider doing any art for a long time afterwards. About five years ago, I started using Photoshop to make surreal mugs and t-shirts for my friends and birthday images. In 2020, I started practising drawing again to tattoo myself, and in April 2020 I bought a cheap lino cutting kit because I was bored during lockdown. I am autistic so having something to hyper focus on while in lockdown kept me together. I became obsessed and haven’t stopped since.

There’s an element of the surreal in your work. I really like the triple-eyed people and objects with very human faces. Would you say you’re drawn to the surreal?

Yes, I like the surreal. I love adding extra eyes and making friends pop out of eggs. I didn’t originally plan on making it surreal, but I was trying to make the images I visualised inside my brain. People told me later it was surreal and I realised I have surreal influences. One of my favourite things to watch have been TV shows by Tim Heidecker and Eric Andre; I think their chaotic style of visual storytelling has rubbed off on me a bit. When photo editing it is easy to mash images together, and then when I started doing non-digital artwork it translated into drawing strange compiled images.

Who are your artistic inspirations?

I am a big fan of Rachel Louise Hodgson (@rachellou_h) who does some gnarly self-portraits, oil pastel drawings and tattoos. Harriet Popham (@harrietpopham) is an incredible lino artist who does some really precise work I could only dream of achieving. Momoko Usami Cotter (@momoumomo) creates beautiful, surreal and often interactive ceramic work. Qualeasha (@qualeasha) works with tapestry and punch needles to create huge and detailed modern art.

You do some amazing larger pieces that are made of lots of textures and different objects and creatures. How do you go about creating something like that?

I normally draw the prominent objects first, which tend to be things which I like, and from the first object I think of things that connect to it in my head (a bit like word association). I then plan out ways to clearly represent the objects through lino carving, which requires working out how to use the negative space. Once the main focus of the carving is done I start working out a background texture that would work best. Sometimes, I like to make it a busy, overwhelming image and sometimes a clear-cut one with a simple background. I used to draw directly onto lino and add whatever came to my mind, working out the composition as I go along. At the moment, I mostly draw all the pieces separately then combine them to make a big picture before transferring the drawing to lino to carve. I am trying to put more thought into composition of the images at the moment, rather than just freeform. Larger pieces take a long time but are very satisfying when they are done.

Why do you like working with lino? What are the benefits and drawbacks?

I really like all the planning involved. When I get to the carving I enjoy how slow and focused I have to be, it is very meditative and relaxing. The physicality of it is very enjoyable too, slowly carving away pieces of lino until you make a picture. The drawbacks would be that it is harder to show shading (at least for me at the moment), you cannot change something once it is carved without creatively working around it, and it is difficult to use a lot of colours. I like working within these parameters, the limits are enjoyable to me.

Where would you like to take your art in future? Would you ever get into commercial work, e.g. creating patterns for fabric? Or is it more about creating individual pieces for you?

I don’t know exactly what I want to do with my art. I’m open to anything at the moment. I just want to have fun and like being given briefs of what to make. I enjoyed making the new Projector band t-shirt and I’ll see where things take me next. Message me on my Instagram if you want me to make something: @trundle.art.