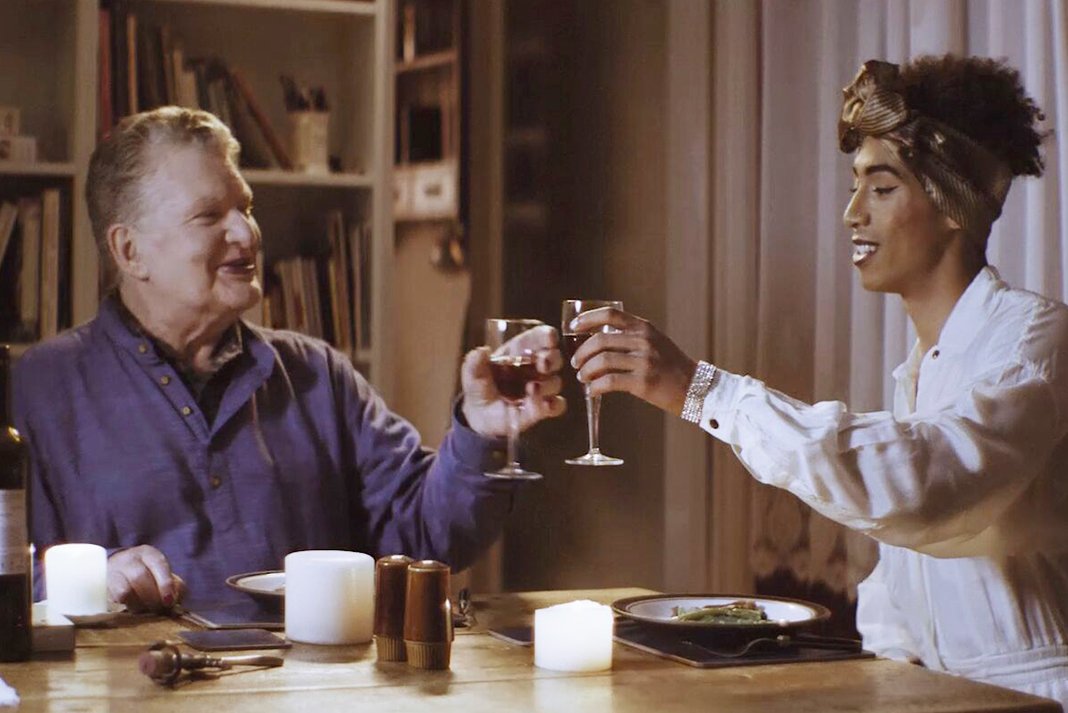 If I were to describe Jamie Patterson and his new film Tucked with the same three words they would be: charming, emotive and problematic.

The film centres on two drag queens from two generations and two very different worlds. Jackie (played by Derren Nesbitt) is modelled off drag queens that Patterson grew up seeing in smoke-filled karaoke bars in the Costa-del-Sol when he was seven. A bit of make-up slapped on, a dress that didn’t really fit, smoking, drinking and telling sexist jokes – most of which in the film have been taken from drag shows Patterson has seen or written by Nesbitt. Jackie, we learn has incurable cancer and, with only six weeks left to live, wants to make the most of their short time on this earth. He befriends a younger, gender-fluid queen (Jordan Stephens) called Faith, an individual that you could pluck out of a RuPaul line-up – primped, glossy and sass to boot.

Although the film’s main characters are drag queens this is not a film about drag queens. It’s about unlikely friendships (which FYI, Patterson loves), grief, death and family. These are themes whom anyone from any walk of life can resonate with. Jackie’s story is one that has been told a thousand times over and which most viewers will know well: a late cancer diagnosis with no time to accept the fact before it’s all over.

Patterson’s writing, coupled with Nesbitt’s performance, as Jackie attempts to come to terms with the life they are leaving, the things they haven’t done and everything that they want to do in the short period left is heart-wrenching. I cried three times during viewing. The audience cannot help but adore Jackie, with their crude sense of humour yet soft heart. However, at the moment you feel you truly know the character, they are gone and you are left empty and forlorn. Fortunately, there are plenty of natural comedic interchanges which lighten the tragedy of the storyline so that you don’t have to sit in a dark room and weep for a week post-watching.

The soundtrack, of course, intensifies every emotion that the characters feel and this one is particularly excellent. As well as playing Faith, Stephens (of Rizzle Kicks fame) came on board as a musical advisor. He sourced almost every song himself and put a huge list together comprising of artists he respected, had worked with or who are just generally bloody good. It also helped that they could get “loads of people on it for next to no money” as the budget was pretty tight – they shot the film in only ten days.

Robbie Williams’ ‘Numb’ features, his Greatest Hits CD is Patterson’s desert island album so this was a massive highlight for the writer and director. He received an email from Williams at 2am saying they could use the track and Patterson proceeded to dance around his living room in desperate excitement which, to be honest, I would have done too.

The problematic element looms when you ask, how much does a straight, cis, white man who (self-confessed) has never performed drag, know about the drag community? Patterson did limited research (he watched Drag Race) before writing and didn’t feel the pressure of representation/misrepresentation until the film went to festival – pretty much the definition of privilege.

It’s a guarantee that the film will reach a wider audience because of the background of the writer. Patterson admits that he has had discussions about drag and toxic masculinity with people he wouldn’t have expected to have watched the film and I suspect that this is because of the director’s ethnicity and gender. It’s fantastic to reach a wider audience and open the conversation about a minority in society, however, what’s the point if it is actually a misportrayal? I have never performed drag so can’t comment on whether Patterson has his representation accurate but then, I have not chosen to write a film situated in the community.

This aside (if you can really put it aside once it is noticed) Tucked is a good film. Being shot in Brighton makes it all the more familiar, every cast member is outstanding and the discussions in the film, of toxic masculinity, gender and grief, are important and I’m glad that they are not swept under the carpet.

Patterson has multiple new films coming out, one about a couple who go interrailing called Tracks, another about a lesbian couple who fall in love on the streets of Brighton and whether they can make it work and the third is called God’s Petting You where two addicts fall in love and plan to rob the biggest porn star in Europe. Patterson is a man who does not stop and although I know that I’m not supposed to like Tucked more after talking to the writer, I do. Problematic yes, emotive yes, but charming gets the biggest yes of all three. 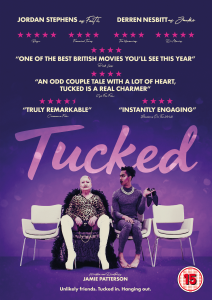 Tucked is released on DVD & Digital HD on Mon 9 Sept