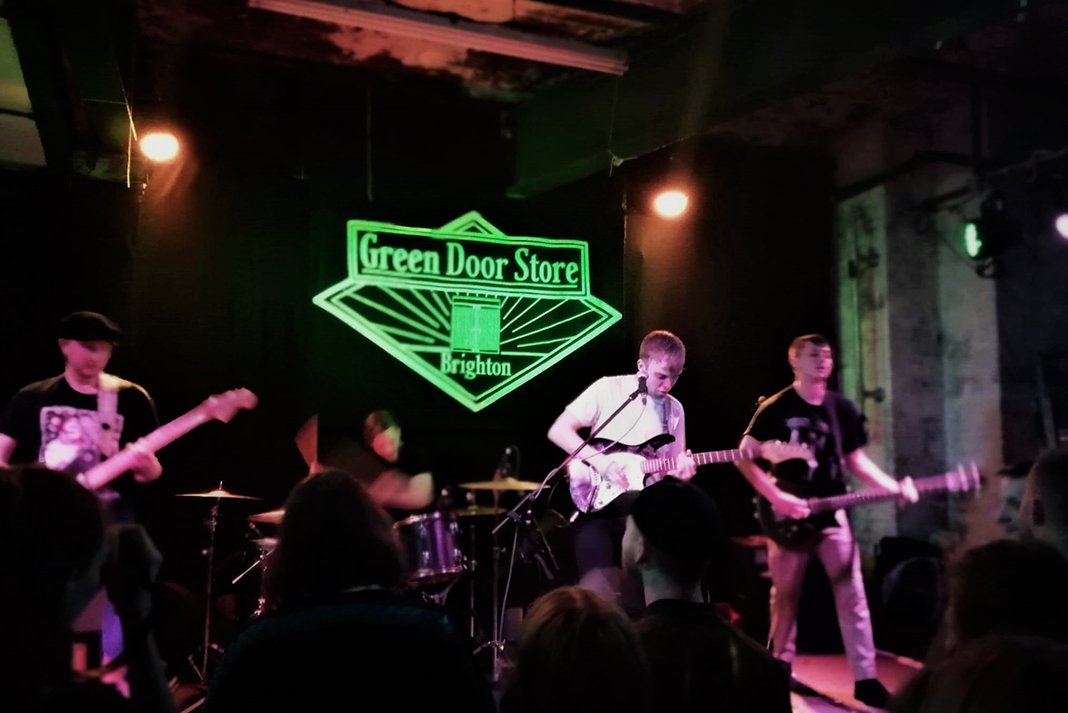 There are nights when living in Brighton feels like an absolute blessing. Living in the beautiful London-by-the-sea can become pretty normal over time (as ‘normal’ as Brighton can be), then small reminders come along that keep us in check of how lucky we are to call this city home. Be it a blissfully sunny day on the beach, a stroll next to the Asian inspired Royal Pavilion, observing the skaters roll through the city at night or an evening when Brighton’s music scene really mesmerises us all.

That’s what Tundra Love’s gig at the Green Door Store did last night. The Brighton based experimental art rock band launched their debut single ‘Sacrificial Man’ at one of the city’s remaining iconic music venues. For a band that have been around just over a year, it’s amazing to see what the four-piece have created within this space of time. Lead vocals and guitarist Callum alongside musicians Giles (bass), Nick (guitar) and Tim (drums), have never failed to put on a good show, and before fans thought it was even possible, they exceeded every expectation of what their launch night was hoped to be.

The night kicked off with dream-pop psychedelic rock band Dreamwave warming up the audience, luring us into a melodic dimension, teasing us with their sounds and what more was to come.

Staffordshire born grunge band Murmur took the stage by storm next. Hypnotising the audience further into the tornado of indie-rock madness, Mumur were yet another band on the line up that proved that the talent and passion of youth is still very much alive and kicking.

The crowd were getting hotter and heavier, as the cobbled floors slowly but surely filled with more people, all awaiting the grand finale. However, that didn’t mean that Guru‘s appearance was not also greatly anticipated. The punk-fuzz band have been touring here, there and everywhere, including last year’s Great Escape festival. Bringing charisma to the room, Guru’s set was anything but dull. Each musician absolutely owned their instrument and their character on stage, making it incredibly hard for the crowd to restrain their inner Alice Cooper whilst eating up every riff that rode their way. Not only did they look trendy, but they sure sounded it, too.

With a sweaty crowd high on good vibes (and possibly some other stuff too…), and the big yellow M shining brighter than ever, there was only one act left. A quick minute to get some fresh air and another pint, and then enter… Tundra Love.

They began with an elaborate instrumental, with every instrument adding its own enticing flavour to the ensemble. The build up was slow and steady, amounting to the crescendo we all know was coming. Then the boys let loose – and there wasn’t a single body that wasn’t moving to their mystic melody. ‘Holy War’ was next on the list and the atmosphere was electrifying. The thing about Tundra Love’s music is it’s catchy, but not in the shit Taylor Swift way, in the way that leaves you craving more. The band kept the entire room levitated with every song, presenting sensational emotion, and ruddy good grooves; not to mention front man Callum’s lovable persona keeping the audience illuminated. It’s not just that each member of Tundra Love have got an unmistakeable authentic talent, but they’re just also a genuinely great bunch of guys. Each guitar, alongside the ripple of the bass and the beat of the drums, ignited an energy in the room, whilst mellow yet versatile vocals serenaded the audience.

Last but not least, the ‘Sacrifical Man’ came alive and we heard his story. The band’s new single pulsated through the atmosphere bringing the crowd together for one last song. The boys played like they were at freakin’ Glastonbury and nothing else mattered, and the crowd looked the same way.

The night was a huge success and it’s times like these I realise how important it is that we savour and protect our last remaining music venues. Moments like these don’t always come around often, but when they do you realise: the power of music is a powerful force. Tundra Love aim to release two more singles by summer 2019, and all I can say is they’ve set the bar high. Oh, and you better be there.

Sacrificial Man is out now, available at: https://tinyurl.com/y4eveeaq