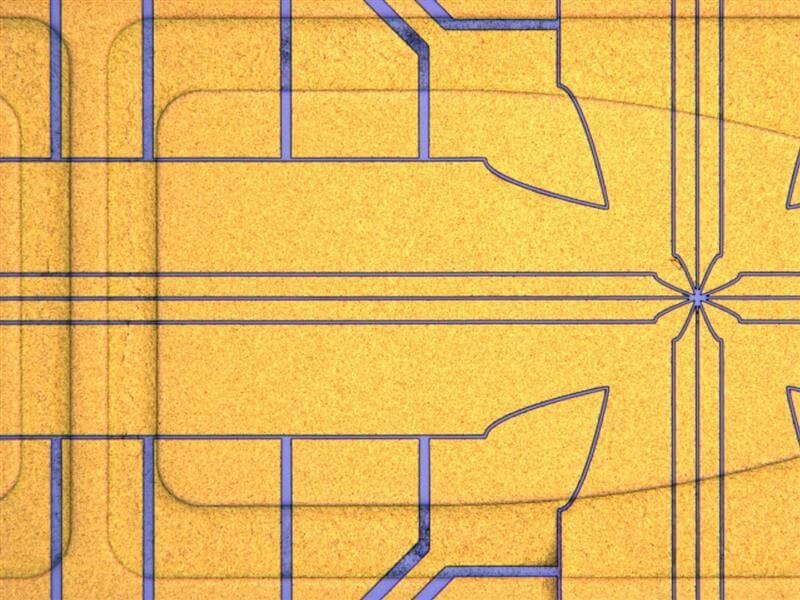 In a quiet corner of Haywards Heath, just a brisk five-minute walk from the station, there’s a small revolution simmering. An interdisciplinary team of engineers are working to profoundly change the way computers work, and perhaps even evolve our understanding of the universe.

It’s a bold statement, but Universal Quantum are using their new laboratory and headquarters in mid-Sussex to design machines which use non-linear methods to calculate possibilities. Now providing the new frontier of computer science, quantum computing embraces the laws of quantum mechanics to solve problems too complex for traditional (or ‘classical’) processors. 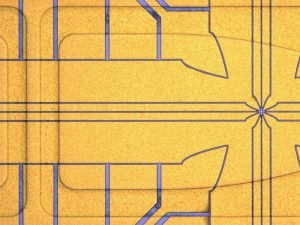 A main reason for the Universal Quantum establishing itself in Haywards Heath is the town’s proximity to the University of Sussex. The Falmer campus is where their initial research started, and they still maintain close ties. “It’s nicely commutable between London and Brighton, and cheaper than either,” Quantum Engineer Luuk Earl tells me. “We’ve also got space to play with. And it needs to be relatively quiet. These are very sensitive machines.” There’s potential for the area to become a hub for quantum and emerging technologies. He says having Brighton and its diverse creative environment close by could inspire different working practices. “The best way to solve problems is to have many different points of view thinking about them. What’s great about a strong art scene is it makes people think differently and increase new ideas, and that could be really valuable for hi-tech stuff.” 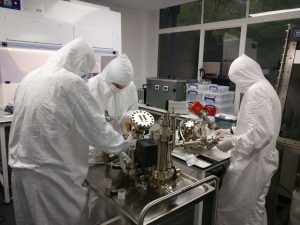 The UK has seen a real drive for quantum technologies in the last 5-10 years. There’s a strong sense of community between government, academia and industry, which has encouraged a lot of quantum start-ups. The country is renowned for scientific and engineering innovation, and these machines genuinely could usher in the next chapter of advances.

Luuk spends most of his day at Universal Quantum designing hardware. But there is time set aside to discuss the realities, possibilities and future of what they’re doing. “You want to keep looking at the horizon, as well as at what you’re doing. Otherwise, you lose sight of what the point of all this is.”

Physicist Richard Feynman introduced the term ‘quantum computing’ in a lecture during the ’80s, appreciating a need for computer science to be able to deal with quantum – the smallest possible unit of anything. “He said it would be really nice to be able to simulate quantum stuff. When you’ve got something which can do that, you can also simulate anything probabilistic, because quantum and probability are kind of synonymous.” Quantum mechanics deals with the behaviours of matter on a subatomic level, and attempts to explain the properties of atoms and molecules. From here, you can start to understand how they interact with each other or external forces. It’s not really a task you can undertake in a linear fashion. We need to think a little broader about how we measure and calculate things when dealing with this scale.

The classical computing which we’re all familiar with is rigidly set around using binary. A string of 1s and 0s (bits) goes into a machine, is processed by an algorithm and a new set of bits is returned to the user. Complicated in practice, theoretically it’s not much more intricate than turning a light switch on or off. Every traditional computer has millions of tiny gates, which either stop a flow of electricity or allow it to continue. This flow is how you establish if a bit is a 1 or 0. Multiply that by a few trillion, and you can be online shopping or playing Grand Theft Auto. Simple.

But what if you asked your computer a question about things which don’t adhere to mutually exclusive states? For example, particles like photons don’t play by the traditional rules. They can be in several places at once, or even simultaneously exhibit two kinds of polarisation.

If you want to track or simulate objects like these, it’s best to build something which behaves like them. Instead of your traditional bit, a quantum computer deploys qubits. These are quantum objects – particles which can take on combinations of all possible values between 0 and 1. We’ve essentially added an infinitely controllable dimmer to that light switch, only it can be both ‘on’ and ‘off’ at the same time. You can now find solutions which were previously impossible, because you’re using a machine which mimics the tidy chaos of the natural world.

Is your head hurting yet? Bear with us. The cool stuff is only just starting. “A lot of the focus for Universal Quantum is on developing the hardware,” says Luuk. “We’re intent on building large-scale quantum machines which can do very, very big computations.”

Almost everyone in this new field is now aiming to develop machines boasting a million qubits. “There’s different values of merit, and it gets more and more nuanced, but generally, if you have a million qubits, you can start to do something interesting.” In context, the machines currently developed by the likes of Google and IBM have 50 – 100 qubits. This has been a linear and protracted process, starting with a single qubit, adding another and then another. Scaling up systems using this approach could take a sustained length of time. “Universal Quantum has approached this by rethinking and revaluating. We’re trying to design something which already works for a million qubits, then build towards that. It’s different, but quite necessary to think that way to get something useful.”

You might be asking how this could impact you and your daily life. On a superficial level, it won’t be very noticeable. Quantum computing isn’t going to offer a better experience on Wordle or get iPlayer to load faster. Not at this point, anyway. But in the wider world there are profound applications for this technology. Atoms bonding to each other is a quantum process, so these machines could easily establish how particular chemicals bond to the body or simulate the effect of drugs upon a patient. There are also some promising applications in material science, like helping to design new batteries, superconductors, carbon capture systems and very large engineering processes like manufacturing fertiliser. The more we understand the world at a molecular level, the more efficient industry can become. 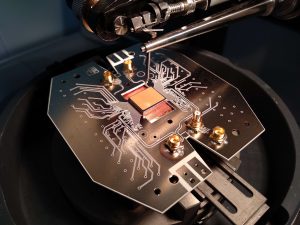 “There are other things like fluid dynamics, which are quite interesting. It’s not quantum naturally, but modelling how air molecules flow around an object is a similar process. It’s intensive to study that with classical computers. One of the limiting factors in designing an F1 car is how much time they can get in a wind tunnel. And doing it computationally is so time-consuming that it can’t be done easily. Quantum computers could help there. And then there are things like turbine design to make planes more efficient.”

On a similar line is weather forecasting, which has often been considered the ultimate test for a large-scale computer system. Building a model of so many atmospheric variables is inarguably a probabilistic process, and one which could have major implications for the economy and industry. “Matching things like that with artificial intelligence to be able to better predict pattern recognition could be really useful.” On a smaller scale, this new method of machine thinking could offer some huge steps forward in cryptography and cyber security.

Most problems, like chemistry, fluid dynamics, logistics and finance, involve some form of minimisation. There’s a function which represents either an energy or time, which you want to reduce to the least possible amount. Classical computers and AI are very good at establishing actual minimums, but finding an equation to minimise everything is where a quantum computer excels. The new systems are being built to complement and empower existing technologies, rather than outright replace them.

“Binary logic is not great when there’s ‘real life’ involved,” says Luuk. “Artificial intelligence is very good at kind of blurring that line. A quantum processor is quite neat in that it natively uses possibilities and variations. So, it fits with machine learning very well, because you’ve got a bit more flexibility.”

Clearly, it’s unlikely classical computing will evaporate under the white heat of this new technology. For most domestic and business users there’s no reason to have a quantum computer. Although, we’re quickly coming up against the limits of systems which use those trusty 1s and 0s. 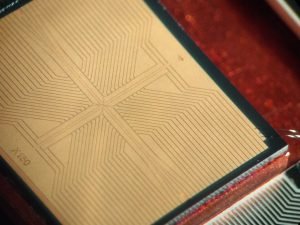 “If you think back to the 1950s, when people were making computers for very simple calculations, no-one would have imagined what they could do now,” says Luuk. “I think it’s a similar point in quantum computing. We’re very much at that early stage. The sky’s the limit. It really depends on how powerful we can make them.”

These new systems have the potential to be revolutionary. It’s difficult to see how far it could go. Those antiquated classical systems of the post-war era used massive vacuum tube valves to control the flow of 1s and 0s, with no concept of how microprocessors might one day transform the process. In many ways, Universal Quantum have a ‘build it and they will come’ attitude to their research and development. “You almost have to build the machine first for people to picture and understand it, and then let their imagination work on how to use it.” In the development of classical computing there was a significant lag between the hardware’s creation and mass understanding of what it could be used for. 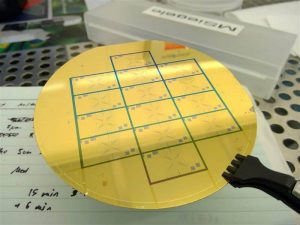 From simple adding machines, then on to databases, graphical interfaces, computer games, the World Wide Web and search engines, once we understood traditional computing, its development has been exponential.

The genesis of the quantum computer was a physicist who wanted to better understand physics. He envisioned a machine which could help simulate processes at the most intricate level possible. As Universal Quantum and their peers edge ever closer to making this technology a functional reality, it’s accompanied by the opportunity to better understand the nature of the universe. Luuk says just having the word ‘quantum’ increasingly in everyday usage will prompt better appreciation of how things are more based on probability and less bound by defined limits.

During The Age of Enlightenment we believed everything was perfectly ordained, and if you knew the correct equation, you could calculate the position of anything at any time in the future. “Now, the philosophy of the human race has changed in that we’re very much more aware of quantum, and I think that will only increase more and more. Even just the aim of trying to build a quantum computer will change how we understand the world.”

To find out more about this exciting new field, including superposition, error correction and entanglement, head to: www.universalquantum.com