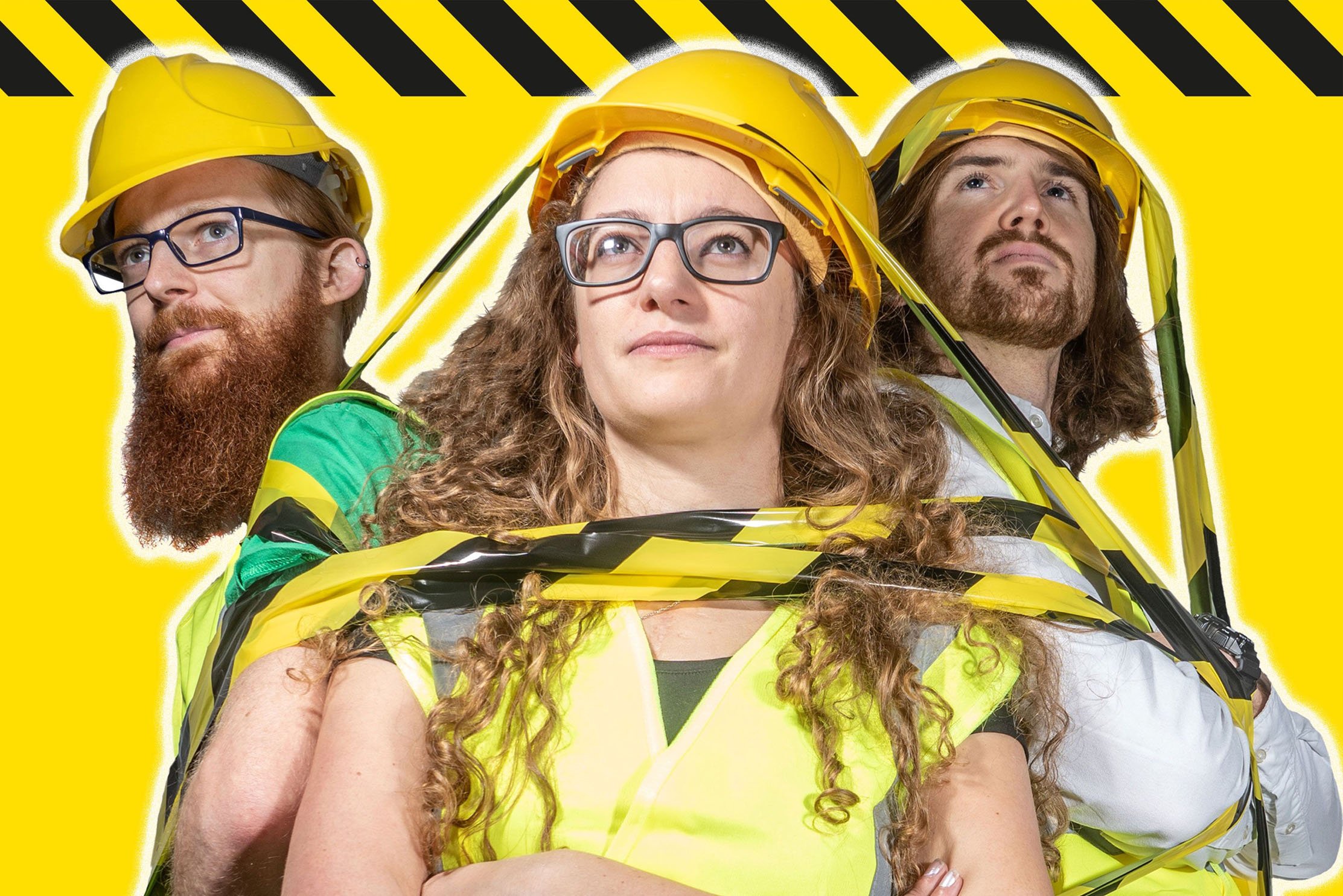 Utopia: Under Construction sees three comedians from the South West breakdown societal barriers and build a new utopia with comedy in just one hour.

Christian Russell-Pollock, Eliza Fraser and John Matthews replace the House of Commons with the House of Comics as they demolish education, family, arts and science, media, government, church and business – the pillars of society.

The show starts with the audience filling out a short questionnaire detailing the three most important things to them and and what their first political manifesto promise would be.

Brighton didn’t disappoint with the impending doom of death, knitting and rum among the three most important things and nationalising McVities top of the list for manifesto promises.

Christian then kick started the show with an energetic, short welcome and introduced the head of construction, John.

A self-proclaimed Jesus look-alike, John, a science teacher by day, begins tearing down the so-called pillars of society and one thing is for certain – this guy really does not like Peppa Pig.

He talks about his friends who have children and how their lives now revolve around this talking hog and the hilarity of Peppa Pig world being in HAMpshire.

While John is very funny, he does not engage with the audience quite as well as Christian, looking at the floor and clearly having notes written on his hand. This was a little off putting as it made his act feel clumsy at times.

We then come back to Christian who picks everyone up with a few dad jokes and moves on to introduce Eliza.

Eliza began telling everyone about her late aunt who she was clearly very close too and it is heartwarming to see the love beaming out of her.

In her view, we need to replace the pillars of society with three things: kindness, cartoons and satisfying sex.

While this is a good premise, Eliza kept forgetting her set and kept referring back to her notes which, like John, was a little jarring.

I really wanted to enjoy Utopia: Under Construction but left feeling underwhelmed. It was at times predictable but overall a good attempt at political satire.

This is not for those who dislike expletive language and cheap sex jokes, there were also quite a few mentions of Brexit so be warned!

While the show had some excellent parts and and was at times very funny, it just felt like something was missing and the comedians were slightly underprepared. Perhaps this was just opening night nerves.

The idea of building a new utopia with comedy is a wonderful one and Christian, John and Eliza’s message of ‘no more Netflix and chill, all about compassion and good will’ is lovely in a world where there is so much negativity and news feed scrolling.

Utopia: Under Construction is running until Sun 2 June at Sweet Werks on Middle Street, as part of Brighton Fringe 2019.