Walter & Zoniel bring A Simple Act Of Wonder to Brighton

It’s inescapable that Covid-19 has brought a sudden halt to the art world and forced all of us to be a bit more insular this year. But a large-scale remnant of 2020’s abandoned Brighton Festival is seeking to reignite interest in public art and make us realise the value in community. Originally planned for May, A Simple Act Of Wonder uses vivid colour to celebrate both human connection and our experiences of joy.

nstallation artists Walter & Zoniel (pictured above) have brought huge outdoor artworks to the streets of Moulsecoomb and Bevendean, in a show which mixes showstopping grandeur with reflections of the area’s history.

“It felt very village like,” Zoniel tells me, recalling the pair’s first visit to the neighbourhood. “The big greens on The Avenue felt like the centre of something. Talking to people, they told us how underused these were. We thought it would be a really good placement for work and highlight the sense of community in the area.”

With the imaginative use of bright house paint, grass paint and gels, the pair have crafted bold interventions on community spaces and streets, adding a sumptuous variety of hues to an often-uniform residential area. The work was created during a unique period in national and global history. Lockdown has been a time where social interaction has been driven online, creating huge physical absences. Almost in response, A Simple Act Of Wonder examines issues of human connection, inclusivity and our experiences of delight. With a mix of colour, photography, humour, meditation, heritage and geography, Walter & Zoniel forged a tender connection between people and communities.

Based along the coast in Hastings, the pair spent around six weeks on intensive research, talking to residents and exploring extensive archives at Brighton’s The Keep – even looking at geological events 130 million years ago, to see how the ground formed.  “We met some wonderful characters,” Zoniel tells me. “We’re visitors to this environment, so we wanted to meet as big a cross-section as possible. There was one woman in her 80s, who was born in the house she lived in.” The aim was to tap into the essence of storytelling. The idea that the actions of people today could be preserved in the logbooks of the future. Few of us realise how wonderful our life stories can be. 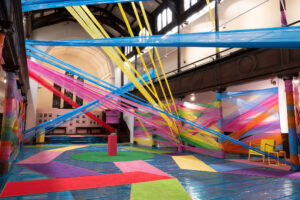 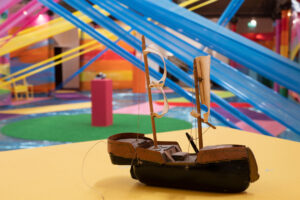 What they developed was a series of transformative works which contradict old preconceptions of the area, while creating a connection to the distant city centre. At Fabrica in The Lanes, they have produced a large floor piece echoing their interventions over in Moulsecoomb and Bevendean. “It used to be a church of ease,” says Zoniel. “A place for people who were further away from the bigger church. We really liked that idea in terms of our art.” Here their installation echoes interior details, such as the building’s stained-glass windows, steep curves and tall ceilings. There’s also a series of ‘over-painted photographic portraits’, which remove a subject’s visual identity whilst leaving settings intact, displayed alongside items from these images. These are particularly interesting because they reveal hidden truths, while being almost completely anonymous. Despite subjects getting silhouetted out, the surroundings they’re posed in can still offer fascinating details about their lives. “We captured someone’s entire existence once, by photographing every single object they owned,” says Walter. “It was the most intimate portrait you can have of someone, but they weren’t even in it.”

During lockdown, Walter & Zoniel have been recording video diaries which chart the project and offer an insight into their creative process.


This commission’s starting point was a shared desire of Fabrica and Brighton Festival to connect centre and suburbs through creative activity. The city has a reputation as a cultural destination, yet most art and entertainment are confined to a comparatively small area. The duo’s grand vision is largely centred around fun – something often lacking in the art world. Playfulness can be a powerful tool for engaging people on multiple levels.  “It’s based on our ethos that art is for everyone,” says Walter. Their work is multidisciplinary, interactive and socially engaging, focussing on human existence and how relationships manifest. Previously, they’ve been engaged by cultural heavyweights like Tate Britain, Somerset House and Photo London, with site-specific installations presented in San Francisco, London and Durham.  “We’ve done big work before, like painting Brighton Beach for the festival in 2017, the outside of a gallery for the Liverpool Biennial and we filled a house in Miami with jelly fish. So, we can do big installations, but they tend to be confined just to one space.”

The project forms part of On The Point, a collaboration with three other European arts organisations. This offers opportunities for creatives from the Greater Brighton area to develop skills, contacts and collaborative practice on community-located projects in Brighton & Hove, Bruges, Rotterdam and Skopje. It’s arguably been helpful with pulling together the different threads and layers of such a complex endeavour. Although the response from all participants has been broadly enthusiastic. “I don’t know if that’s because we’re blinkered to positivity,” says Zoniel with a small chuckle. “I assume people are always going to be into doing things, because it is about joy. And that is essentially the connection everyone is looking for in every moment.” There are too many opportunities to get bogged down in the banality of life. If there’s something playful and different enough to spark attention, people will generally engage with it. Which works well for getting permission to do things like painting public buildings and verges.

And now their trail around Bevendean and Moulsecoomb offers a new form of modern-day storytelling. Creating a sense of the fantastical, community buildings have been given an almost tapestry-like coating.  A Simple Act Of Wonder operates on several layers, bringing the community together, creating uplifting relationships between the everyday and looking at the experiences which have shaped this area. “We’ve never gone through a time where we’d met people beforehand,” says Walter. “Normally we turn up, and there’s a big installation… so people are drawn to us, like moths to a flame. This time we’ve met them and their stories have influenced the final work.”

Walter & Zoniel’s A Simple Act Of Wonder can be seen across Brighton’s Moulsecoomb and Bevendean neighbourhoods now. An accompanying exhibition can be viewed at Fabrica, 40 Duke Street, Brighton BN1 1AG

Due to COVID-19 restrictions the exhibition can also be accessed digitally through Fabrica’s website at:
www.fabrica.org.uk/a-simple-act-of-wonder
www.brightonfestival.org