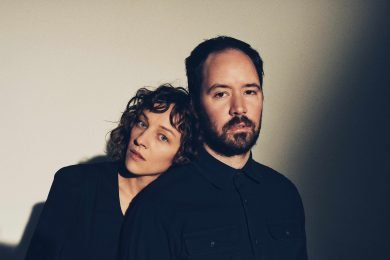 Critically acclaimed roots music duo Mandolin Orange are emerging from lockdown with a change of name and a new album. Now called Watchhouse, Andrew Marlin and Emily Frantz are marking the change of identity with an artistic rebirth.

Still firmly rooted in poetic Appalachian folk, Watchhouse offer a bold sonic adventurousness, informed by sweeping American primitive guitar work and ambient soundscapes. It’s audacious, spectral music which wrestles with and finds magic in the relationships we build with our families, our society, our planet, and ourselves.

Recently, Watchhouse shared the music video for New Star, a song about familial solidarity and self-sacrifice. Directed by Sylvan Esso’s Amelia Meath, the video centres on the almost instinctual rituals of our lives which tie us to various communities: children playing, friends sharing a cigarette, families gathering for dinner.

After a year that forced many of us apart, it’s a reminder of the joys we are just beginning to return to and the strength we draw from each other.

Produced by Marlin and Josh Kaufman (the latter producing records for The National and Bonny Light Horseman, and playing on Taylor Swift’s folklore) the album offers a reinvention. Its nine songs are both personal and political, touching upon Marlin and Frantz’s newfound parenthood as well as climate change and caustic online interactions, as they parse out how to live a kinder, more decent life on their own terms.

To produce the album, Watchhouse decamped to Smith Mountain Lake, a sprawling hideaway at the foot of the Appalachians. Kaufman urged Marlin and Frantz to approach the process with new eyes and throw out their old conceptions about what their music sounds like. Alongside drummer Joe Westerlund, guitarist Josh Oliver, and bassist Clint Mullican, Marlin and Frantz broke loose, surprising themselves as they indulged in novel structures and textures.

Belly Of The Beast is an astral waltz, while Better Way shifts from nimble harmonies to an acoustic drone. Beautiful Flowers is a particular highlight: A sparse elegy for a butterfly crushed by an car windshield that ponders industry and environmental degradation, it climaxes with funereal horns and Frantz’s affecting vocal.

It’s been a long road for Watchhouse, who have had a part in redefining roots music, going from coffee shops to the Ryman and Red Rocks. Their 2019 album Tides Of A Teardrop was a runaway hit which lead to the band’s first ever national TV performances on CBS Saturday and the TODAY Show.

Ahead of their self-titled album dropping on Fri 19 August 021, via Tiptoe Tiger Music, we caught up with Watchhouse’s Andrew to find out more.

Was there any temptation to drastically change your sound, along with the band-name?

I think people hear a new sound from a band and it feels immediate, so they associate the change with a declaration from the musician. It is much more gradual. It is a beautifully slow process that is constantly grabbing bits of inspiration and information from every part of life until one day it ends up on a record or on a stage.

Did the album turn out as you initially intended, or was the recording more of an evolutionary process?

Our intention was to allow as much space for everyone to feel free within the songs. That freedom led to some very unintentional, but fantastic, parts being played. So in that sense it was kind of both.

You had Josh Kaufman in for production duties, who has impeccable resumes. How much did he inform the finished album’s sound?

Josh really encouraged us to make the record we wanted to make right then and there. It seems like a no-brainer, but it can be debilitating when there are so many expectations jamming the pathways to artistic freedom. I feel we took that concept and ran with it. From there the ideas were just flowing and the songs were coming to life. It was a magical few days and a wonderful process.

Did the writing and recording process teach you anything about yourself?

Yes, but in a way that’s difficult to describe. I give myself fully to the creation of it all and come out on the other side trying to make some sense of it.

Did not being able to ‘road-test’ songs comes as a burden to the album’s creation?

Not really. An album is an album, and the stage is the stage. We have found so much freedom in that.

The video for New Star captivated us, as it offered a narrative and a range of welcoming emotions – which is increasingly rare in modern pop promos. How much input do you have on the scripting? And do you like your videos to tell a story?

Amelia nailed that video. She brought forth the concept and we loved it. I remember finally seeing it for the first time and getting bleary eyed. There are so many close friends and community members of ours featured in the video and, especially after over a year without seeing so many of them, it felt like a homecoming.

Are the characters featured in your songs broad alter egos or complete fabrications? Are there any which recur across records?

I tend to write from my own experiences. The embellishment comes from pulling the fibres apart and looking at the world in tangles. This allows the listener (and me) to put it all back together in a way that suits them.

Does losing touch with your roots ever concern you? How do you stay grounded in the face of growing attention?

That is not something I am concerned with. I am driven to write because it aligns my heart and mind. I play because it brings me absolute joy and allows me to share that joy with others. I am rooted in sound.

Can experience ever be a good substitute for inspiration in music making?

It can hold its own for a bit. Likewise, inspiration can be an amazing short-term substitute for experience. In the end they fill two different roles and when both are present in a performance, each is elevated by the other.