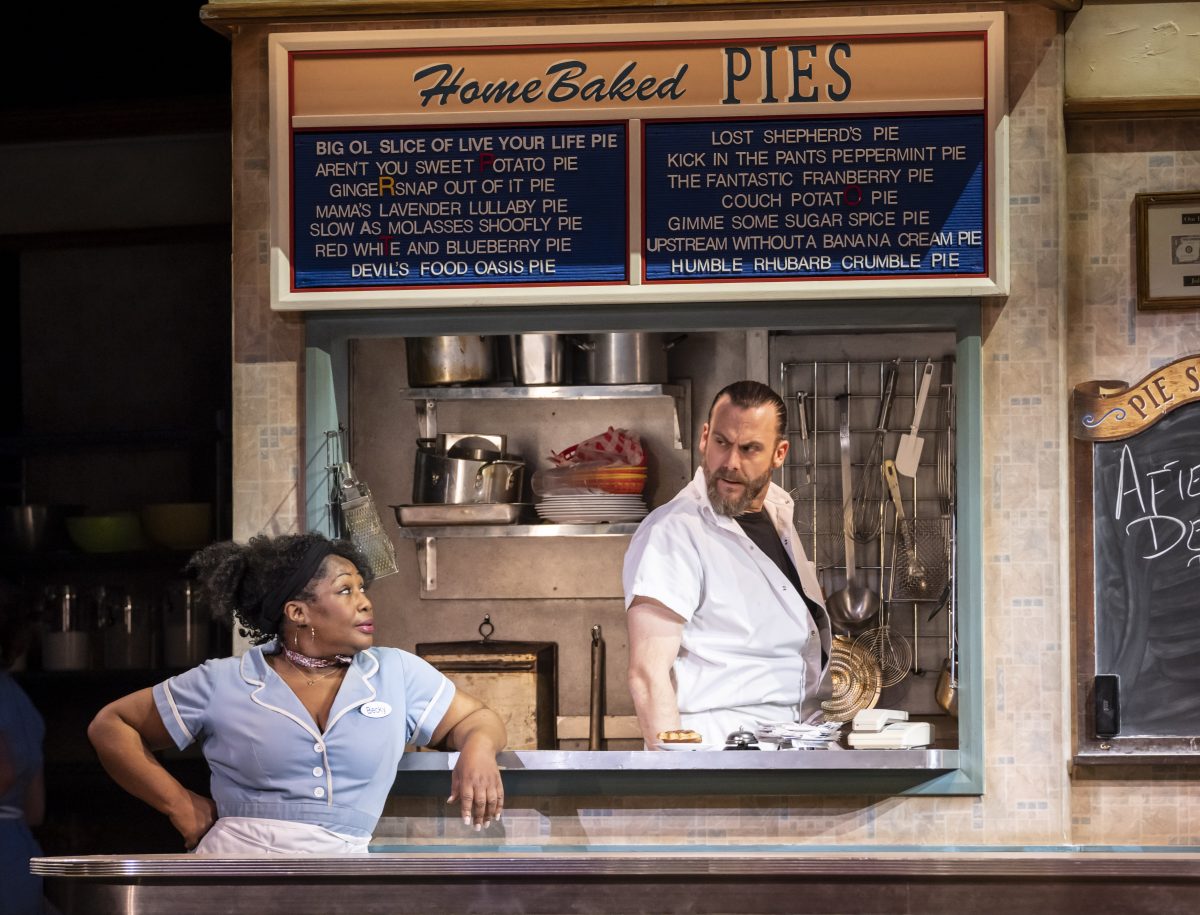 Waitress has music and lyrics by American singer-songwriter Sara Bareilles and a book by Jessie Nelson based on the film of the same name by Adrienne Shelly. The Waitress Musical is currently in its third year on Broadway. It made history as the first show with an all-female creative team. This team, including choreographer Lorin Latarro and multi-Tony Award-winning director Diane Paulus, Theatre Royal Plymouth, UK ,2022, Credit: Johan Persson
Stuart Rolt·9 min read

Pies. So many pies. Of all shapes and flavours. “I was trying to think how many pies I’ve eaten. It’s around 400.” It was one of the in-work hazards for stage star David Hunter, especially when he’s appearing in a thrilling musical set in that most iconic of all American institutions – the small-town diner.

Now out on a huge tour across the UK, Waitress stars Chelsea Halfpenny (9 to 5, Casualty, Emmerdale) as Jenna, a young woman with plenty of drama in her life. One thing which offers sweet release from a humdrum life is the baking of spectacular sweet pies. Confronted with an unexpected pregnancy, she gets pulled into the orbit of Hunter’s well-meaning, but compromised, Dr Pomatter. “Despite it being an American character, he’s got that classic, bumbling, slightly awkward, stereotypically English personality, at least as Americans would see him,” Hunter tells me. “It came very easily to me, being that slightly awkward fella. I can pull that off without too much hassle.” The Doctor and Jenna end up having an affair, providing a small amount of comfort from their own troubled relationships.

This vibrant musical is an evolution from a ground-breaking Broadway production. Written and composed by an all-female team, it offers a woman’s gaze on very contemporary issues – toxic masculinity, suburban boredom and abandoned dreams. An adaption of the 2007 film, written and directed by the late Adrienne Shelly, it folds in a captivating set of musical numbers which seamlessly shifts the narrative between poignant kitchen sink drama and dazzling fairy-tale.

Hunter ruefully admits he hadn’t had the chance to see the film version prior to auditioning for the role of Pomatter in the show’s debut West End production. “The only place you could find it then was on YouTube. I was watching for five or ten minutes, thinking it was quite quirky and faced-paced. Then I realised it had been sped up, so it didn’t get a copyright infringement. So, I abandoned that, and went into the audition just with what I had on the script.” Winning the part, he was given the space to make it his own. The original American writing team travelled to London and walked the cast through the show, offering their experience of what had worked in New York. “But really, you were allowed your space and make it your own from moment to moment. It was a lovely experience for me in those early days.”

It seems he was a huge fan of the show’s original Broadway recording long before joining its UK outing. The Grammy award-winning Sara Bareilles’s (Love Song, Brave) songs elevate the show, perfectly complementing the book by acclaimed screenwriter Jessie Nelson (I Am Sam). “A few mates said, ‘There’s a part for you in Waitress, if it ever comes over.’ I listened to it in case I was ever dragged into an audition and asked to ‘learn it by tomorrow’. From the first song I was bowled over. It was just BRILLIANT! It’s a real masterpiece.”

While the problems faced by Jenna might seen insurmountable, she’s got two best friends at work. Becky, played by Wendy Mae Brown (The Book of Dust), and Dawn played by Evelyn Hoskins (Spring Awakening), are on hand to provide solace and good-natured advice. And this is where the core of the show sits. It shows a timeless friendship between three waitresses at various stages of their lives. “Obviously, without the male roles, the conflict is gone. The men are very much supporting. And Chelsea, Evie and Wendy are just stunning. They’re so funny, but so heart-wrenching. They just nail it.” From the triumphs to the troubles in Waitress, everything is lent a genuine sense of authenticity through having a female-created story and a female-led performers, which even in the 21st century is a comparative rarity in theatre.

“It’s such a serious story at the heart of it, which is important to tell. But it also has these very broad and funny characters coming in and making us laugh. Which makes the emotional moments hit all that harder.” He says there’s every reason not to believe in musical theatre as a concept. There’s a person standing onstage, expressing their internal thoughts through the medium of song. Objectively, that’s not something based in reality. “But there’s something about music which makes us react in a visceral way. For me, as a performer, acting through song and presenting really good musical theatre music is the absolute peak of making people feel something.” The beauty of musicals is that they can compress very complex narratives into three minutes of song and bowl the audience over. Reaching that level of emotional resonance could take a couple of hours for most other drama forms.

With two young kids at home, being on tour has provided a rare opportunity to sleep as much as possible. “It’s about the first time I’ve had a lie-in for six weeks.” At the moment, Waitress is winding its way around the nation until mid-August, including a run at Theatre Royal Brighton on Mon 11 – Sat 16 July. The show has been the focus of his life for the last four years, and he’s made Dr Pomatter role his own. “He’s a bit of a catalyst in it all. It’s a lovely part to play, because you get to be part of all those changes and development. But to be honest, Jenna does most of that work onstage,” he jokes. “She cracks on with it, I come on – a little bit funny, a little bit of song, then back for another cup of tea!” He admits his dream backstage routine would involve always having someone on hand with a nice cuppa but is happy to seek out every venue’s kettle himself. “Even though Waitress has a lot of serious edges to the narrative, there’s a lot of fun in it. And there’s a lot of fun backstage. You need that on a long tour, the energy has to be good.”

Hunter’s career has seen him play Charlie Price in the West End production of Kinky Boots, as well a debut in One Man, Two Guvnors alongside James Corden. “I got to watch how it was all put together, watch actors like James Cordon, Oliver Chris and Jemima Rooper and learnt an awful lot.” He’d already become a recognisable face in show business. As the frontman of pop/rock band Reemer, he’d supported artists like The Feeling, Scouting for Girls and McFly. “It’s good to keep things changing. You kind of get a collection, the roles start to say something about you. I’m very proud of all of them. They’re all shows that I’m happy of people thinking of me from.” And there were those few months he spent as part of a weekend light entertainment goliath.

Serotone and Motive start 2016 at The Arch

He competed in Superstar, a TV talent search, where Andrew Lloyd Webber sought the lead for a revival of his 1971 rock opera, Jesus Christ Superstar. “I wouldn’t say it kickstarted things, but it put my name about a lot more in musical theatre and going to auditions people knew more about me.” The show is now the subject of a 12-part limited podcast he’s doing with fellow contestant Tim Prottey-Jones which runs through all the highs, lows, dramas and egos of the experience. “It’s nice to rewatch it. I’ve been reading some of the reviews. The Guardian said: ‘This could be the death of TV talent shows,’” he says with a guffaw. “For me, looking back at it. It was a really good experience.” It was part of a string of shows involving Lloyd Webber, which platform some brilliant performers. Once a staple of weekend teatime programming, these became synonymous with discovering the stage stars of tomorrow. “So many great people came from them. It was a no-brainer, really. You felt it would lead to some ‘notoriety’ to a degree.”

Now he’s on the road, delivering sensational songs like It Only Takes a Taste and You Matter to Me. Waitress is a colourful celebration of female solidarity and the joy of pies. Hunter remembers how the team from New York were conscious of whether the Brits would understand these slices of US culture. There’s a perceived divide in our two nations’ different attitudes to comedy. But we watch so much US content over here, that we’re happy to embrace the little peculiarities of the American dream. And the message in the show is universal. “There’s something about it which keeps people returning. There are people we see at every venue we go to. They just travel with it. Because it’s become their safe space. Maybe that diner has become a happy place for all of us.”

David Hunter stars in Waitress, which comes to Theatre Royal Brighton on Mon 11 – Sat 16 July. His new podcast, Jesus Christ Supercast, will be available on all good platforms from Thurs 7 July.