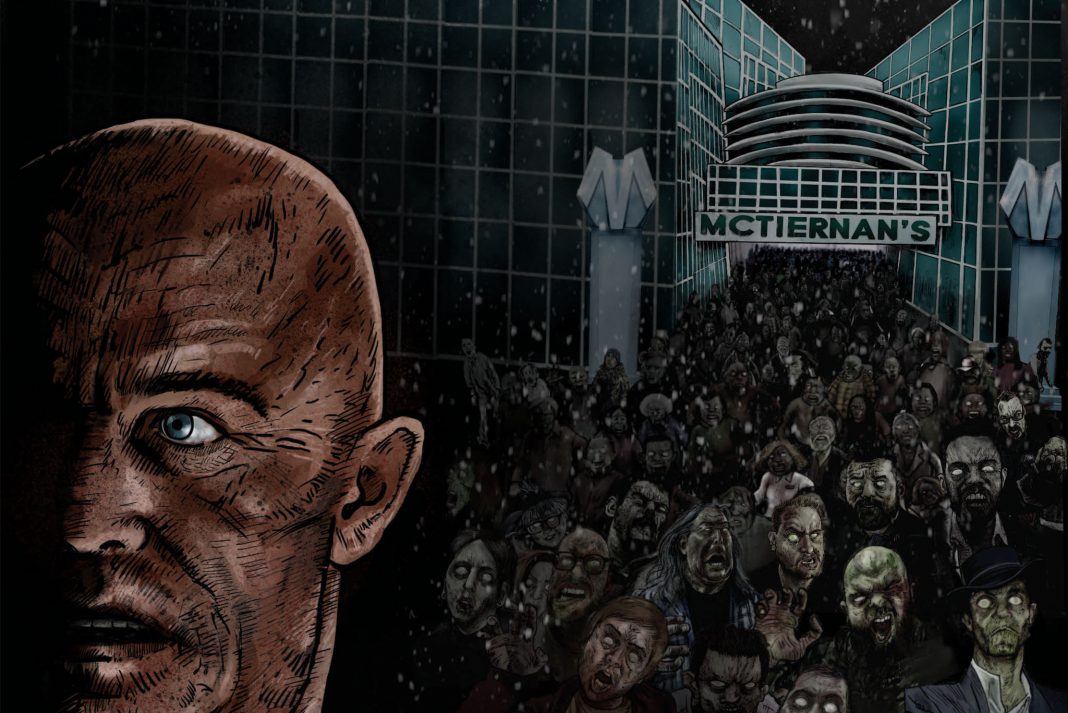 Brighton based writer, and the creator of What I? Stories, Matthew Stapleton has always loved to tell stories. As a child of the 80s he’d often find himself watching movies over and over, wondering what the back stories were for smaller characters in the movies we know and love: Jaws, Gremlins and Die Hard to name a few.

And so, What If? Stories was born.  He teamed up with likeminded Brighton based artists Mark Hooley, Rhys Wootton, Jess Forrest and Harry Utton and they began bringing his imaginings to life. Stapleton has written and self-published three issues at this point and is currently working on number four. 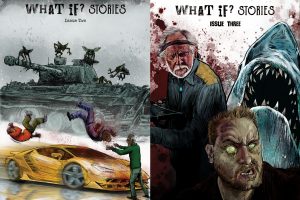 Right now, Stapleton is raising funds through Kickstarter, so he and his group of artists can publish the next batch of sensational stories. By donating, you can get the entire back catalogue, as well as limited edition issues. Check it out and support local Brighton artists creating cool comics. They’re 52% of the way to target, with just under a month to go – so a little help will get them over the line.

BN1 spoke to Matthew Stapleton, to find out just a little bit more.

What’s your background in story-writing?

I have always loved to tell stories. I did screenwriting courses and horror genre courses with Lighthouse and the Script Factory. I set about writing scripts but grew frustrated at having nowhere to take them. So I began trying to acquire an agent and some of these provided feedback on my work, helping me to improve. I started working on short film scripts and helping others develop their feature scripts, but without a guarantee that the films would be produced it was all dependent on funding and other factors. After several near misses, I started to look at why I wanted to tell stories in the first place. I remembered my What If? Stories – my imaginings set around the films I grew up on, and so I began to write them. I decided I would release them in an anthology comic format. The hope was that over time all these short tales will tie together to create their own world.

What were your initial inspirations for What If? Stories?

When I was growing up there were only four channels to watch and we had a library of films taped off the TV. A trip to the local video shop was a highlight. It’s fair to say I watched the same films a lot. I would often find myself wondering what happened to sub characters or other events that may have happened in movie towns. Before I knew it, I had a variety of backstories for lesser characters and had created my own What If world – stories behind the stories we know and love. For example: one of my favourite character actors, Dick Miller, played Mr Futterman in Gremlins and he would say “The Damn Gremlins took down our planes in WWII!” As a kid I took this very literally and believed he had faced them before. Home Alone has an old man who lives over the road and all the kids feared him. There is a rumour that he killed his family and I would wonder – what if he did? So this is how it started. My inspiration was to flesh out the story of some characters whom I felt had been overlooked and to explore the film worlds I had come to feel at home in.

Where there many parameters when creating these stories?

In terms of parameters when I started, I wanted to keep each story to 10 pages – mainly due to costs. This was quickly abandoned. It worked for issue one, but I could see it would be too restrictive. I want each story to be a satisfying bite that leaves you wanting more.

Is there unrealised joy in some of the lesser characters in films?

I think so. Some characters just capture your imagination and you want to spend more time with them. I relish thinking about what makes those characters tick or what their story would be. Deputy Hendricks from Jaws is one of those characters for me. He features in the first two Jaws movies as Brodys Deputy. He’s wide eyed, naïve and loyal to Chief Brody who he clearly idolises. I always liked him and felt there was more there. That’s why in our last issue we did a story called Amity, focusing on him investigating the goings on in Amity. His story continues in issue 4 which we’re funding right now on the Kickstarter. He leaves Amity in search of a fresh start, heading to Perfection (where the movie Tremors was set). He soon learns no town is perfect.

What is it about 80s film which still resonates today?

The 80’s was a great time for film. It’s the nostalgia element I think that attracts people to it. I feel that creativity hit a peak. There was a sense that nothing was impossible, as audiences we were seeing things we’d never seen before and I think more chances were taken. For me, watching old movies especially of the 80s but also 70s (Jaws/Star Wars) is like catching up with old friends. Life moves on but you always love your old friends, the ones who were there when you were finding your way. I kind of feel like that with movies. Yeah, there’s all this great new stuff out there and it’s pretty exciting, but sometimes I just want to sit and relax into the familiarity and comfort of an old friend. 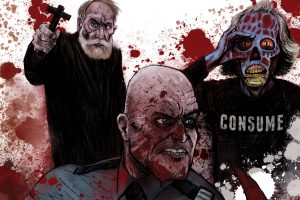 Do you think attitudes towards graphic novels and comics have changed over the years?

I think some people used to think comics were for kids. Now, so much film and TV come from comic books that those people are having to take notice and show it greater respect as an art form.

Also because of some of those shows and movies people are going and discovering a love of comic books for themselves.

How did you discover the other local artists you collaborate with for What If? Stories?

The first story I decided to work on was Die Hard of the Dead. A friend of mine posted about it for me in an arts group on Facebook to see if I could acquire an artist. The next thing I knew, I kept getting Mark Hooleys name all over my Facebook wall so I contacted him and we met for a beer. I expected he’d laugh at the project and that’d be the end of that. He didn’t and now here we are. Rhys Wootton who worked on issue three and is working on issue four, was recommended by Mark. I met Jess Forrest through my day job. She worked on issue one, then on issue three and I look forward to working with her again on issue five. Harry Utton who worked on issue one got involved when I was still figuring out what this was going to be and how I was going to do it. He was helpful as a sounding board as well as creating a story for that 1st issue. The entire creative process has been really interesting for me. All four of those artists have a completely different approach to creating artwork. It has been a learning curve for me, but I feel very fortunate to be working with them. These stories are a labour of love and it’s nice to see them handled with care by such talented local artists.

Is there a thriving comic and graphic art scene in Brighton & Hove?

Brighton is a very artistic town! I believe the scene is alive and well here and I have certainly found people to be supportive. The flag for comics is always being flown by our local comic shop Dave’s Comics, which has been going strong since I was a kid. I used to go there as a boy and pick up boxes of old Superman comics. It was very strange seeing my own comic on there shelves and not something I expected would ever happen. I believe there is room for Brighton to host its own comic con though and that’s something I’d certainly like to see – it’d certainly save me some travel.

What do you hope people will take away from the What If? Stories?

The most rewarding thing about the series so far is hearing how much people have enjoyed it. People have got onboard with the concept and validated this crazy adventure I have embarked upon. The main thing I want is for people to be entertained and to escape what is sometimes a hard world to exist in, especially right now. I want to make them think a little bit too. Maybe the next time they’re watching a movie they’ll find themselves looking at a character and wondering, what if?…

What If? Stories are written by Matthew Stapleton, with incredible artwork by Mark Hooley,  Rhys Wootton, Jess Forrest and Harry Utton. Found out more on the What If? Stories Kickstarter Page