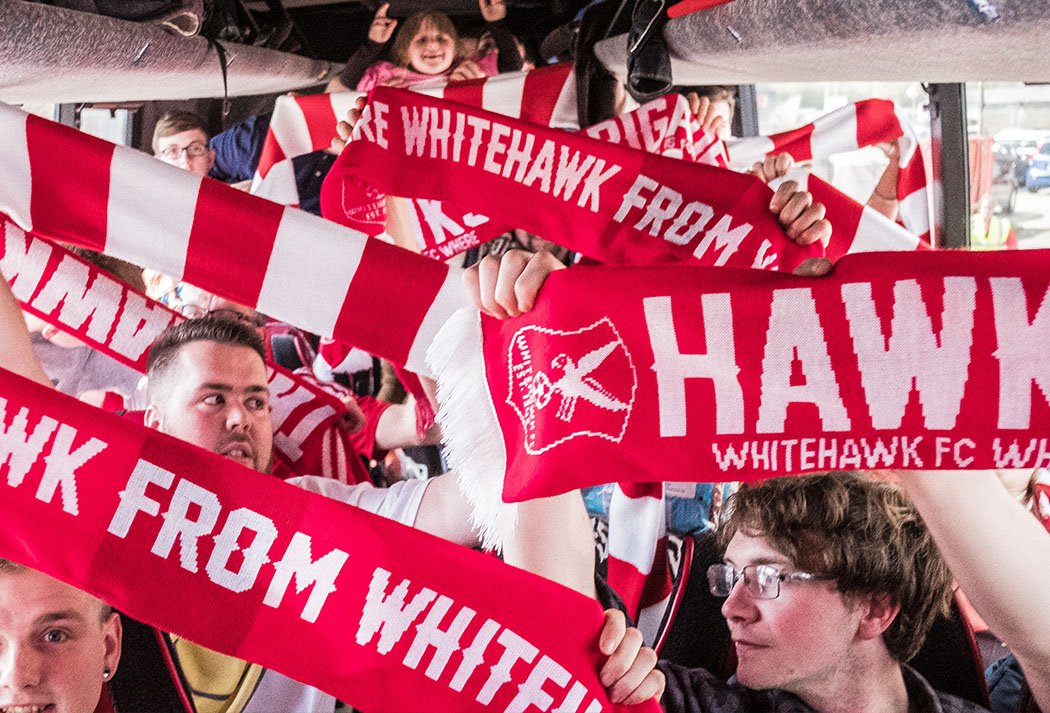 Perhaps the most ubiquitous word in football is ‘united’. So much so that it has almost come to lose its meaning. However, it is absent from the name of a club to whom it perhaps best applies: Whitehawk FC. Emblazoned in capitals against a garish yellow background on the steps of the club’s ramshackle main stand are the words: “Love. Peace. No racism. No violence. No homophobia.” The club preaches inclusivity. Commercial manager Kevin Miller says: “Football’s way behind in terms of inclusion, and it needs to change.” 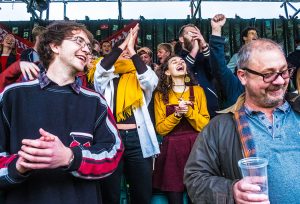 Whitehawk FC are atypical in many ways: there are vegan pies in the canteen; craft ale from local brewery Loud Shirt served at the bar; and their embassy is at trendy café Presuming Ed’s. Bespectacled fan Steve calls it “football but not as you know it.”

Football lags behind in an era where, even as global politics is turning to the right, tolerance is on the rise. There are no outwardly gay male footballers in England’s top four divisions. To highlight this Whitehawk recently hosted a charity game, dubbed Football United, between a Premier League XI and an LGBTQ+ XI, to celebrate togetherness in football. The event was organised in collaboration with activist Sophie Cook, the first transgender woman to work in the Premier League. Miller says: “They were trying to find a venue and Sophie said we’ve got to do it at Whitehawk, because of the inclusion stance and the fact that we’re doing everything that we can to make things equal for everyone.”

Much of what makes the club special originates from their vehemently anti-racist, anti-homophobic and anti-sexist fans, known as the Ultras. They come every week to bang drums, chant and have a good time. Phil, known as Bluebeard for the cobalt tuft on his chin, explains: “We are political. Left-wing, but in a nice way.” The use of ‘Ultras’ is tongue-in-cheek, a nod to violent and intolerant Ultras around the world. The diverse crowd who attend and would perhaps feel uncomfortable following other teams come for this club’s congenial atmosphere.

Their chants are unconventional. There is no swearing allowed. When an unfortunate official inevitably makes a mistake, rather than resort to crude language the fans sing: “the referee’s a…referee”. Or more provocatively: “the referee’s a Tory”.

Though they always change ends at half-time to sit behind whichever goal Whitehawk are shooting into, The Ultras are associated with the rickety Din End where a disco ball swings from the rafters and stickers are plastered across the back wall, bearing mantras like ‘refugees welcome’ and ‘football lads and lasses against fascism for a united working class’. There is evidence of visitors from further afield: several stickers have been left by Pier Pressure, the like-minded Eastbourne Town Ultras, and fans of the hipster German club St Pauli.

Whitehawk’s foundations rest upon the relationship between the club’s hierarchy, the Ultras and the local community. Last year, the Ultras crowdfunded £500 to bring 30 children affected by the Grenfell Tower disaster to the club. They paid for the bus, took the children to the beach and bought them fish and chips. The club then made them mascots for the day. 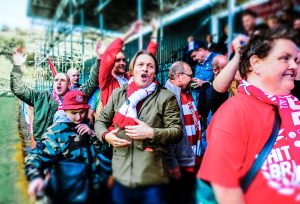 The Whitehawk estate is one of the more deprived areas of Brighton & Hove. To help maintain the team’s connection with the area, the new season’s away kit is designed by cult artist David Shrigley, himself an Ultra. It features a rainbow flag and a map of the Whitehawk estate. The response from local people has been positive. Recently, 42 volunteers turned out to repaint the club’s peeling fences scarlet. They returned the next day to finish the job without being asked. The club rewarded them with free tickets to their next game.

What Makes the Grand National Different to Any Other Race Meeting?

Miller hopes to raise this year’s average attendance to 500, despite Whitehawk’s final-day relegation last season. The ethos of the club belies the non-league architecture and the pitch’s 16-foot camber, and should encourage more to come, putting larger clubs to shame.