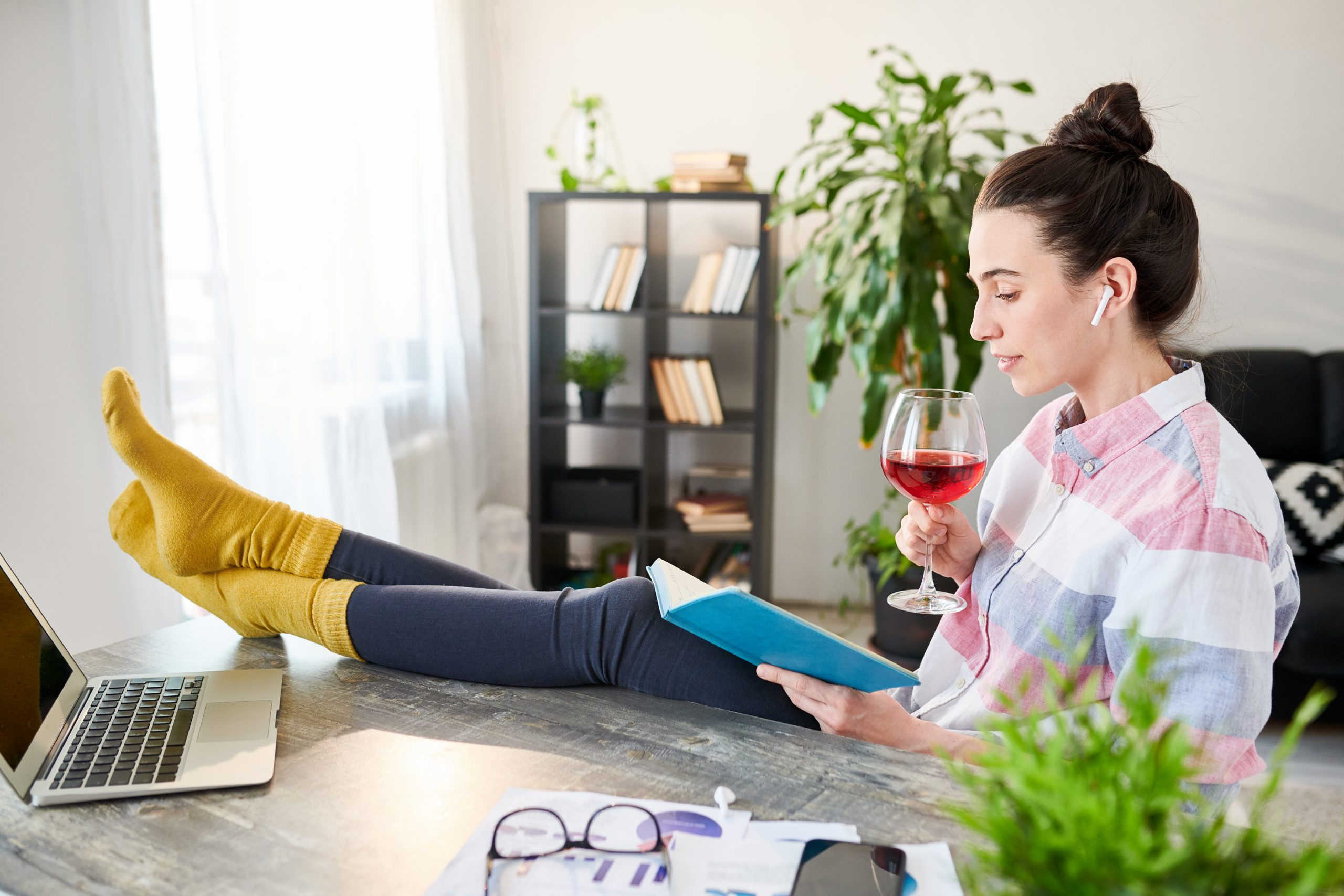 Working From Home: The Good Bits

For many of us, a few weeks ago, the prospect of stopping the daily schlepp to the office, of avoiding office politics and clichéd water-cooler moments, of not having to sign and write something “personal” on the umpteenth birthday card that month for someone you are only vaguely aware of, was a beautiful prospect indeed. The thought of working from home, managing your own days without the distractions of red tape, pointless long meetings or trifling small talk was akin to hitting the jackpot.

Somehow, though, now we’re suddenly forced into such circumstances, it doesn’t feel quite the bonanza we were hoping for. I guess that could be in part due to the daily doomsday announcements and the prospect of not just working from home but doing, essentially, everything at home.

But it’s not all bad! Let’s focus on the positives; the reasons we were all pining to ditch the commute and work in our three-day-old under-crackers whilst sat on the sofa, dangerously within reach of the remote control…! Here are the best things about working from home, and a bonus reason to make us all grateful that we’re able to do so at all.

“Unprecedented Times”
These days there are almost constant references to how “unprecedented” these times are. True. But they’re missing the bigger picture. The most (and best) unprecedented aspect of this situation is related to the vast increase of video calls and meetings being conducted by work colleagues. Suddenly employees are being afforded unprecedented access to their bosses’ living rooms! Take the time to enjoy a good a gawp, maybe see what art they’ve got on their walls, how stylish their furniture is, or which scantily clad colleague who claimed they were self-isolating is accidentally wandering past in the background. They could all provide new fodder when angling for that promotion. Fodder/blackmail, it’s a grey area.

Tea Breaks
A tea break can finally be an actual break! You can make one cup of tea, sit down and do something else for a few minutes – catch the headlines, gaze out the window, begin reading all the back issues of BN1 Magazine – before going back to work, refreshed. This, as opposed to trying to get up from your desk in stealth mode, before a colleague, usually the same eagle-eyed lazy bastard, spots your cup in your hand and lifts his cup aloft; the cue for a dozen other cups to be held aloft in Hunger-Games-style solemnity. At which point you must traipse round and collect them all, uttering the traditional cult-like blessings as you go: “Milk and one?” “Builders or Earl Grey?” “Peace be with you.” Twenty minutes later, a dozen teas delivered and barely appreciated, you arrive back at your desk to find five missed calls from your boss who thinks you’re just off slacking, and the realisation you forgot to make yourself a tea. SON OF A-!!! Not whilst at home though, my friends – tea breaks are back to being tea breaks, as intended by our Lord! (Gary Lord, a guy I used to work with).

You can down a bottle of plonk whilst at work!
Can’t work out why your colleague’s emails are becoming increasingly fanciful and incoherent over the course of the afternoon? I’d hazard a guess that they’re one step ahead of me, and have been taking advantage of the relaxed ‘drinking at work’ policies that companies are suddenly adopting (without knowing it). This is a fool-proof and clandestine perk that can stay between you, your bank balance and your liver, your boss being none the wiser. That is, assuming you don’t go overboard, get absolutely hammered, and end up firing off some email to him or her in a drunken rage, telling them where they can stick their job, they’ve been holding you back for long enough, and that you’re off to the States to make it in Hollywood! This is unwise. Mainly because you’d be very lucky to get a flight to the States at the moment.

You can spice up your day by playing hide-and-seek with your housemates
Have you spoken to a colleague on the phone recently who sounded like they were whispering inside an echo chamber? I’d bet my life savings they were mid-way through a game of hide-and-seek, and were answering from within a wardrobe. And I’ll double that bet, to £8.20, that they sounded frustrated because your ringing them gave away their location and resulted in them losing. I think we should all agree that if business calls come in during a game, everyone comes out of hiding and, much like the Premier League will hopefully be this year, meaning Liverpool wouldn’t win the title, the game/season is made null and void and we all start again after the phone call is completed/COVID-19 is eradicated. Agreed? Agreed. Tough break, Liverpool.

Save money on washing powder
One thing about working around other people is that it’s kind of de rigueur to not stink and to have clean clothes – I know, the unrealistic demands put upon by modern society these days! But guess what? There are no colleagues to judge you at home! I’m not suggesting we never shower again and start rolling around in our own shit, (although there are some perfectly good scatological websites available out there if that’s your thing. So I hear!), but we can at least relax the rotation of the wardrobe. You don’t have to have a different, crisply ironed shirt on every day, or worry that everyone’s beginning to suspect you only have five respectable work outfits to your name. Anything from nude upwards is finally on the table! You won’t have to buy any Persil for weeks! Although, if you’re having video calls, maybe the nude option isn’t quite as appropriate, at least on the top half.

Try out different hairstyles without fear of ridicule
Related to our new sartorial freedom, we suddenly have a great opportunity to try out all those outlandish hairstyles we’ve wanted to, but haven’t had the balls to in case they’re disastrous. Spend a day or two getting used to a new way of wearing your hair, trying on a new persona, and see if it feels like you without the scrutiny of a hundred amateur fashionistas who are so generously willing to offer their unrequested views on any new look. Or be even more daring and try a new haircut altogether: all you need is some scissors, a couple of mirrors, blind trust in whoever’s wielding those scissors, and a mild indifference towards your own appearance.

Singing on the loo
You can sing on the loo without being judged by the weirdo in the next cubicle who doesn’t think it normal to sing the Match of the Day theme tune at full volume whilst you’re going to the loo. (Just me?) You can also take longer than the apparently acceptable seven minutes that I was told we were allowed to spend on the loo when I was at a previous job. Seven minutes!!? I’ve barely warmed the seat up by then! You’ll be glad to hear I shan’t go into any further details at this point. However, as I say, there are scatological websites available… But how nice to think that, for the next few weeks, no one will be checking their clock and thinking, “blimey, what’s he doing in there??”

So, although the highlights of working at home might not be exactly what we were imagining, there are still a few good perks. And there’s certainly no point complaining about it, because we’re the lucky ones. We must, again and again, spare a thought for those NHS staff who don’t even get to enjoy such puny pleasures. Instead, they have their own personal battle to fight every day just by going to work for the sake of all of the rest of us. Impossibly long, gruelling days with not nearly enough thanks and recognition.

Hats off to these selfless, committed and brave people every single day. Well not just hats off – if I could, I’d take everything off and I’d stand buck naked in honour of them all. Actually, what am I talking about, I’m at home: it’s all coming off. NHS, when we first met, and I was being held upside down and slapped into existence, I was in the buff. Today, I am back in that birthday suit, and may my gross, adult, flabby nudity be a tribute to you all! (Jeez, it’s only Week 1 and I’m standing naked in my lounge talking to people who (thankfully) can’t see me – what’s Week 12 going to look like??!)